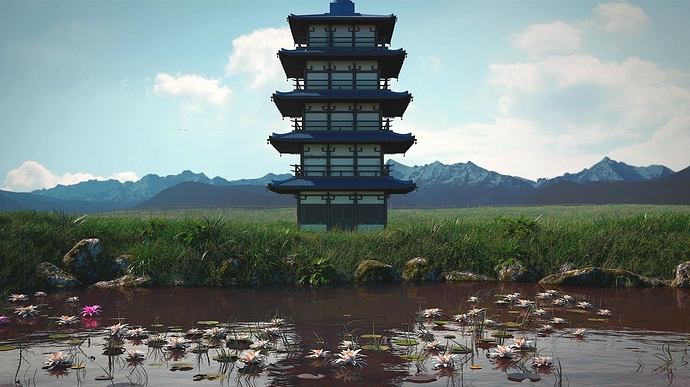 The foreground flowers, murky water, rocks with moss, grass, all excellent. The background looks quite alright, as does the sky.

If there is a problem, I would say it’s with combining these elements. It’s like a tardis in a field https://aggiesprite.files.wordpress.com/2012/02/tardis-in-field.png

The reason it reminds me of that is because it looks like it doesn’t belong there. I don’t have extensive knowledge of asian cultures but just by looking at references, I’m pretty sure the temple building code doesn’t say: one must build it in a place without any significance and without a path to it, because temples aren’t about guidance at all.

The scale of the temple looks wrong. The flowers are what one can relate to, the rocks look to be right next to them so they’re not that big, and the temple looks as if it’s just behind those. The front entrance is about 3 rocks high. You could step on one so probably could jump on three.

Having the most significant element in it cut off just at the top, creating a visual tangency, is not good. If the photographer traveled that far in the middle of nowhere, that person would probably have energy left to move a bit back to get the whole temple inside the frame. 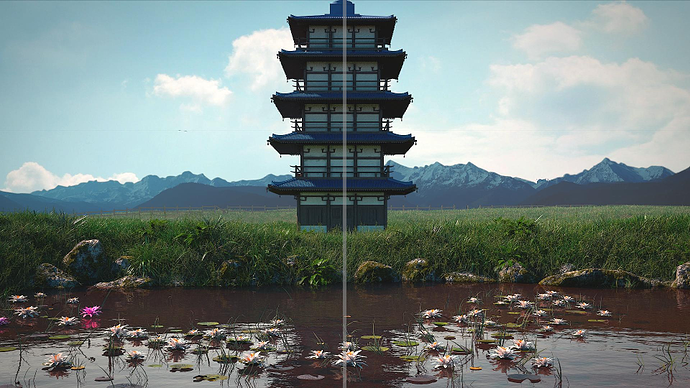 Not sure if it’s intentional or not but the foreground flowers, things on the water, the space between the plant and a rock, the lines on the temple and the cutoff at the top almost perfectly align with the dead center of the image. Just something to be aware of so that you don’t accidentally create something that might look unnatural. Might go unnoticed on this one, the centered composition for a temple is strong on its own anyway.

Check references. Without researching which place it could be, which religion or which culture, the temples can look simple and complex at the same time. There looks to be trees around most of them. If there are mountains, the temple would be on it, or it would be close to water but the mountains would be closer to it then.