I added the issue to the known issues section

pitiwazou - Thank you very much

Of course, most of the credit goes to the developers. I was able to do a small bit of the simple code, but mainly directed, documented and made the thumbnail rendering template .blends and marketing material for the project - and also some of the CC-0 model assets, but some of them were donated by my other 3D friends.

But! Plise! add .LWO format. Now use only OBJ

Thanks for keeping updated mkbreuer

Thanks for keeping updated mkbreuer

i don´t know if understand right, but i am not the developer. I’m just a user.
All thanks go to @manujarvinen

nice addon
btw, I am just curious about how to make this pic

They addon is awesome. I just cant figure out how to get the thumbnailer to work on windows 10. I have tried everything to get it to work and no luck so far. Any help would be very much appreciated.

Awesome addon, thanks for the great work. I do have a question though, how to do you get the thumbnailer to work on windows 10. I have tried everything I can think of and I can’t seem to get it to work. I followed directions on github also. I still can’t get it to work at all. Any advice would be very much appreciated. Thank you in advance.

I made add-ons that can quickly create assets with Blender alone.
↓ download - GitHub ↓
OBJ_&_Thumbnail_for_Asset_Flinger.py

This is an add-on that creates thumbnails and obj for Asset Flinger in no time.
An obj file with an object name,
A small thumbnail image of the selected object,
You can create it immediately in the specified folder. 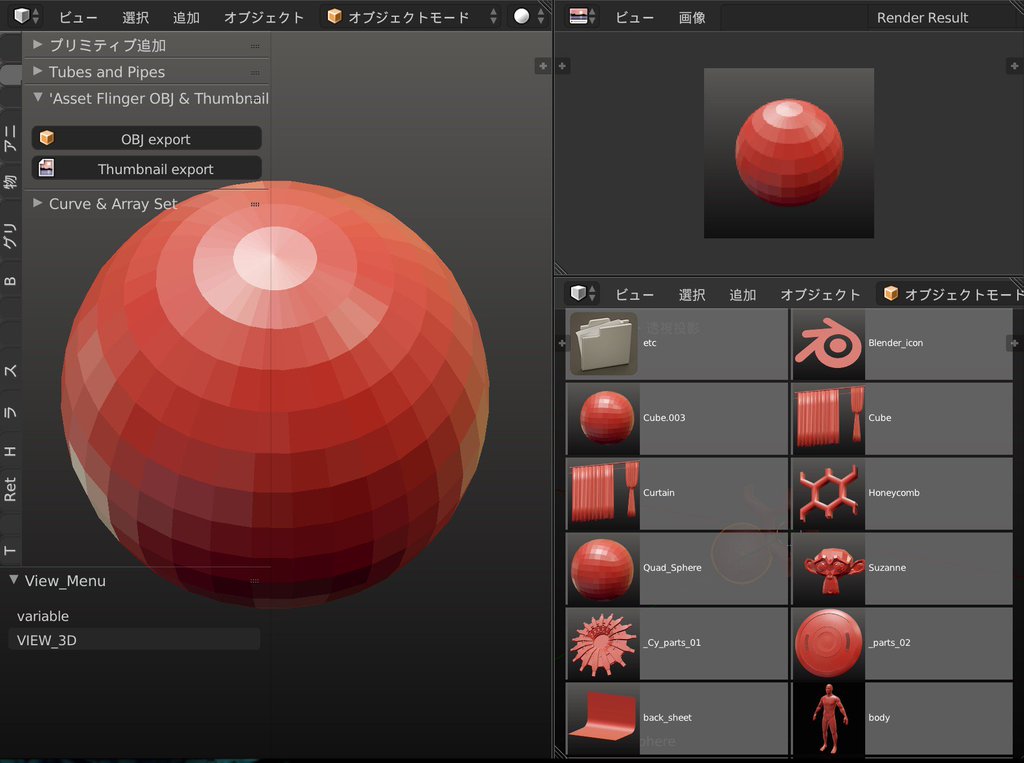 ■ How to use
● DL and install this add-on
● On the Asset Flinger add-on setting screen, set the file path of a favorite place
● On the setting screen of two add-ons, set the same file path as the file path set by Asset Flinger add-on
● Image / UV editor is divided and displayed
● View 3D> Tool Shelf> Create> Asset Flinger OBJ & Thumbnail ← Because UI is added here, execute OBJ Export and Thumbnail Export respectively.
● When Thumbnail Export is executed, the result of rendering is displayed in the image / UV editor, so please try several times while checking this and find a good angle.
● !! save is overwriting immediately after saving !! be careful not to wear same object names Hi @maxon , I just discovered the addon and it looks great! Thank you for creating it.

I had an issue that i asked to Thomas Hoppe on github and i’ll post here as well in case you could clarify it for me:

I am slightly confused on how things work and addon should be used.

Here is my use scenario and expectation:
1- I have an existing model library in blend files
2- I just would like to generate thumbnails to be used with your addon (But addon generates/exports a blend file which wipes out the model in it)

So, isn’t that possible to just generate thumbnail without blend or obj files?
I hope my questions make sense (:

Yeah I don’t really know a good solution for you

The add-on is pretty much discontinued and also it can’t be modified to work in the future Blender 2.80 even, there’s such fundamental changes made to it.

I wonder if there’s a script somewhere in the world to render out thumbnails from your .blends automatically but I can’t help much with that. One way could be to try to modify the thumbnailer Python code to be a script that you could apply to all of your .blends but that’s a whole different project and at least I wouldn’t have the skills to make it happen.

It really would be a pity this project to be abandoned. Anyway I’m sure that this addon has served as an incentive for other developers.

Thanks! I agree - maybe in the future there could be a chance that Blender has some other visual way that could be used to enable Asset Flinger again

Hy! During my analyse of insert methods i made a fork project from version 0.3 (*.obj / *.blend)