Wow you must have a big screen, …
Can you make it so that side pannels auto colaps when not used (ea like windows taskbar) behaviour ?.
If possible, then your UI update would be realy nice. (and even for those with big screens i think).

Razorblade: i have updated the UI tell me how it looks on your screen. There is more space for the windows now: 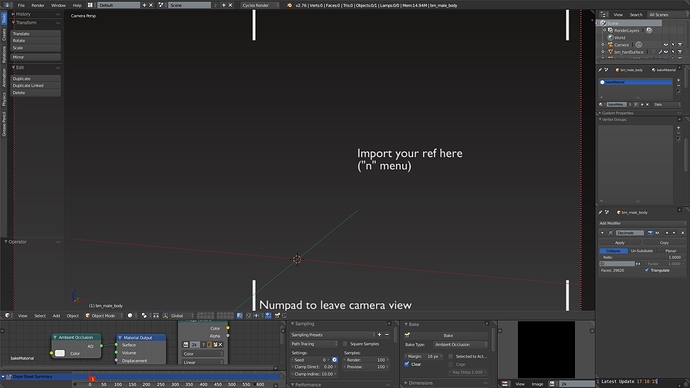 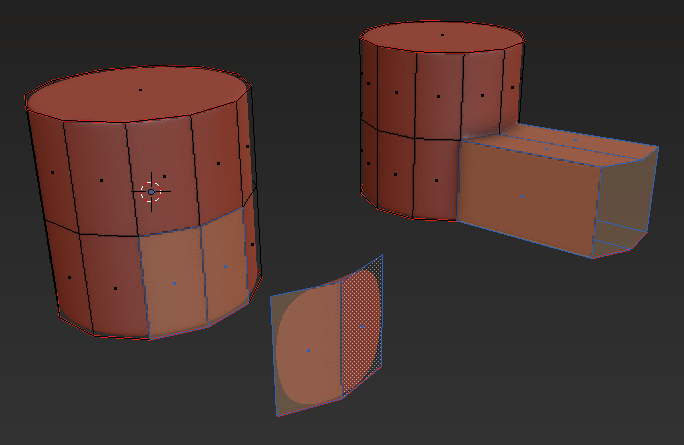 Hey it looks pretty nice, some how you made the fonts smaller, this is a theme.
Perhaps just an idea; now you changed the default view, but me add it as an extra view ea “game creator” or so.
Maybe … ohno just forgetting after 2.76 there’s no next… hm maybe when 2.8 is out have something like this in place too.

I am wondered how about put it in a rigify ready pose ?
And maybe but i am not sure about this, use quads instead of tris for the figure… i’m not sure because if the goal is sculpting then i dont know if it matters, i was just a bit supriced to see a mesh basedupon tris.

And maybe aply a rigify too so it wold be a nice start for animators as well (if one wants to sulpt then one has to remove the rigify depending if one add faces or not.

For the extra layout i will wait Blender 2.8 Interactive Mode and the PBR viewport.

I have changed the base mesh by one made by Nick Zuccarello (Free to use, i mentionned his name on the 3D model): http://www.zbrushcentral.com/showthread.php?61792-Free-ZTL-Model-from-Nick-Zuccarello-(new-VIDEO-page-9-added-8-7-08)&pp=15

I can suggest to enable Rigify in the Addons but i can’t put a rigify ready pose, it’s more useful to learn animation, the game artist has to sculpt his own character.

1- need a Female Body Base Mesh free to use with almost the same quality of the Male. 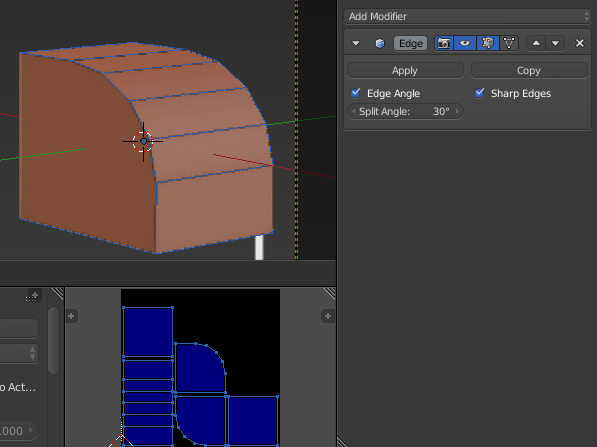 It would be good to have a script called “Quick Unwrap” in the U menu or addon that does it automatically or an option for the Edge Split modifier that apply a seam at each edge split. With 2 settings the Angle of the Edge Split (renamed Seam Angle) and the Margin of the UVs. I will put it in Dark Blender by default.

I can do that for you if no one beats me to it, but I have other work I must do tonight. So if that request isn’t filled within the next 24 hours, I will do it.

I have updated the Layout before the Quick Unwrap feature: 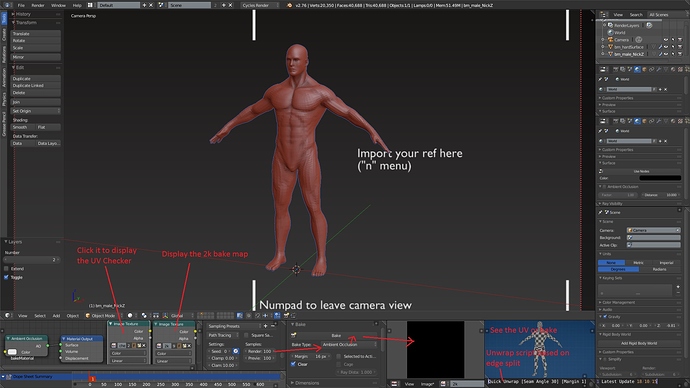 Edit: i have removed the second view it lagged too much, i’ve put a note area instead to write the specs of the game model: max polycount per LoD, texture resolution, etc.

I don’t know much about how to license scripts so I am releasing this under the GPLv3.

If you need any changes let me know. Again, please tell me what that second Edge Split modifier does, I don’t get it.

For those who have imported it in Addon you will break the menu, to repair Blender go in “:\Users%username%\AppData\Roaming\Blender Foundation\Blender\2.7x\scripts\addons” and delete the script.

It works i have imported it in Dark Blender, i have added a button under the UV Editor. Thank you! Right now I set it up to work with multiple objects. So you should apply it (in object mode) select one or many objects and run the script from the text editor (or however you got it working) and it will apply to all of them. Here’s an updated copy of the text from the script. Tell me how you fixed it to be install-able and I’ll release any updates to it that way? (this version remembered to include remove doubles, old version I forgot to add that, this version also sets the split angle to 30.1 and the unwrap margin to 0.07 as requested)

If necessary, I will try (tomorrow) to write it so that it will work in both edit or object mode, but I have to go to work now. I think it’s a very simple fix, but really gtg.

Ok thank you, the new version is online. For version 1, 01 i have written 1, 0 because it doesn’t compile otherwise. I have removed the last line for the Edge Split.

How are you installing it successfully Linko? Also, I re-downloaded your dblender.zip I don’t see where you put it? Anyways, really gtg.

It’s now under the Bake menu to maximize the UV window. I’ve tried to unfold a cylinder with 3 seams and it works fine + i keep the control of where my seams are compared to Smart UVs so i can manage to hide them and the script keep the orientation. It works with Mark Sharp Edges too. It will be an awesome tool for low poly game assets and hard surface. 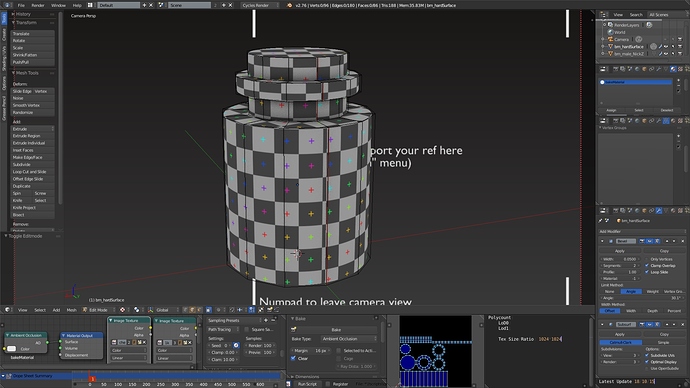 Here are all the changes:

Ok, I get it, it’s part of the scene file. I don’t think that is ideal, long term, but since it is a use-ful trick I understand why you want it, even as is. There needs to be a way for the user to set the angle for the edge-split, etc… Even then, there are some models that no matter what setting you put the results aren’t great (try it on a UV sphere, best setting I could find was 10, everything else is basically un-usable). Also, without changing the angle, if you use it on the Human man model you provide (to over-ride it’s nice UV’s it comes with) it just doesn’t work, so I think it won’t work for a lot of models, as is. I’ll update it.

Just a note. The man you put in, should have his scale and rotation zero’d out, and his over-all dimentions (you can see this in object mode in the ‘n’ menu at the top, should match the real world metric dimensions of a 6 foot tall man. You can temporarily set blender to meters to help figure that out.

SINCE ZBRUSH is using 2x lower resolution in viewport that is then scaled to fullscreen, it seems such a trick could GIVE massive viewport performance boost for sculpting. In other words if Screen size is 1920x1080, how big would be the performance boost if things are rendered 960x540 and then stretched to fit the screen.

Maybe it is worth investigating and would add a lot of value for such a custom build.

Cancer: it’s now in meters, i have rescaled the body and applyied the scale.

The script must not be used with organic and round shape but for hard surface models and retopology. Normally a game artist must add Seams at every hard edge (Edge Split or Smoothing group, the name depend of the software). With this method you just have to focus on adding some seams at smooth edge to avoid stretching.

Floki: your resolution is too big for most Blender users, but it’s a nice suggestions for those with a big screen. I have added the Meltdown addon in the zip though it doesn’t export in TGA and it’s the most used texture format.

I had made a scene setup few weeks ago to bake stylized/faked hand paint for Dota, i have integrated the setup in the zip:

(the result after the Combined type bake LP to HP, i haven’t painted it) 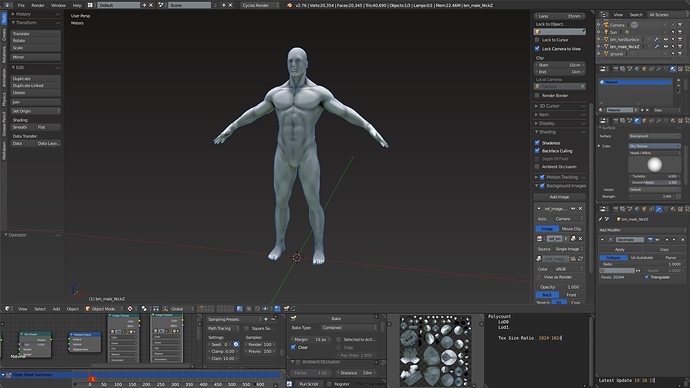 To Linko. If u set in render options (preference panel) output image to tga it will save it in tga. 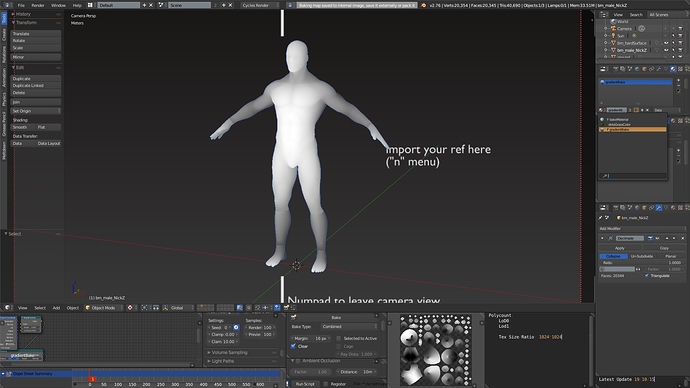 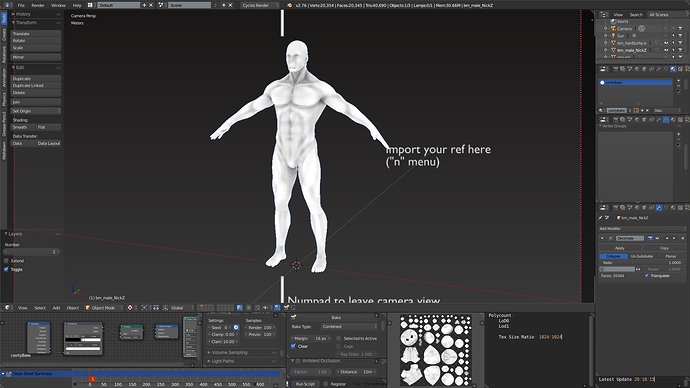 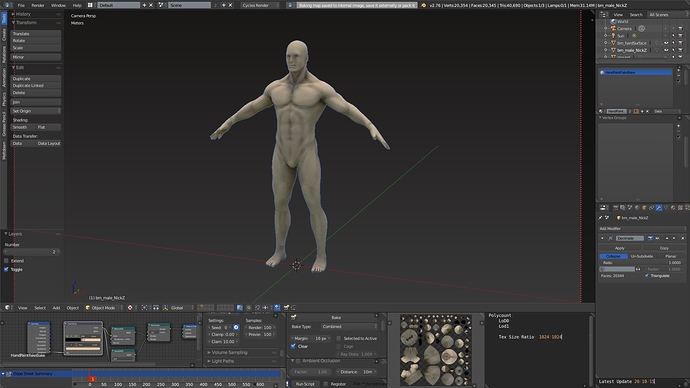 SINCE ZBRUSH is using 2x lower resolution in viewport that is then scaled to fullscreen, it seems such a trick could GIVE massive viewport performance boost for sculpting. In other words if Screen size is 1920x1080, how big would be the performance boost if things are rendered 960x540 and then stretched to fit the screen.

Maybe it is worth investigating and would add a lot of value for such a custom build.

I guess this can be achieved by changing the virtual pixel mode in the user preferences to double.

This version works ‘both’ on Multiple Selected objects and it also works no matter if you are in edit mode or object mode.

If you tell me exactly where you want it, i.e. ‘a custom pop-up menu via hotkey’ or a specific ‘hotkey’ or put it somewhere on an existing menu etc., I will set it up, so that it can be installed and then easily accessed how you want it.