Hello.
I’m new to the Blender and have completed the tutorials on Beginning Modeling found at the online wikibook. Please assist me with any feedback on my model. Thank you for your help. 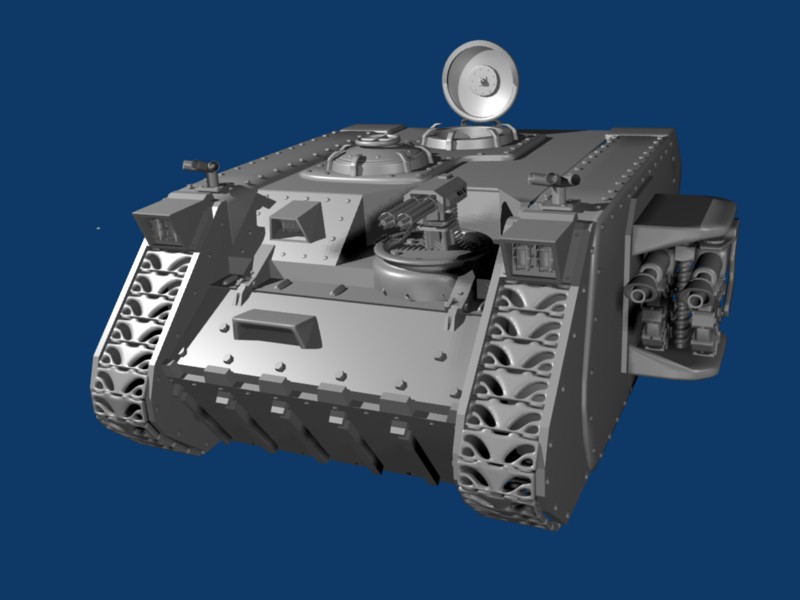 The modeling looks very good. The design could use a little rethinking, as it looks overly vulnerable to jamming the treads or attack from the rear or sides. The lack of clearance under the chassis would give it problems moving on other than paved surfaces. Nice detailing, though. Most Blender beginners don’t do half so well.

yes, I agree it looks good so far, and better thaan most “beginners”, let us see some more models! (or whatever else)

Many thanks for your advices/comments!
Orinoco: Of course, you’re right. I was so busy with the modelling, that I forgot the structure. Anyway, I’m trying now to make it better.

That’s a really fantastic model, especially for a beginner!!
Are you going to add some textures when you’re done with the model?

You are looking perfect. Now start UV the next step.

hes modeling it off of a series of warhammer 40 vehicles… with a few of his own twists to it… as the normal rhino dont have twin las cannons on the side.

the smoke casters seem a bit small… otehr then that all it needs is some texturing and some added details like some railing… barbed wire… spare gas tanks or spare treading hanging on the hull to make it stand out more apart from the default models.

looks more like an altered land raider to me… anyway it is fantasticly brilliant work keep it up (show us more models please!)

thats very good but i do see a some design flaws that would prove catastrophic on the battlefield.
first are the theads, they are exposed in the front! in any tank or apc the front is natuarly the most heavly armored part of the vehicle. this is so it can withstand head on attacks while it charges and it can afford to smash through walls, small trees, and other light obstacles.
the worst flaw is the way you placed your weapon systems. you have no weapon that can fire 360 degrees with out having to turn the whole vehicle around. this makes you very easy prey for anyone who wants to climb on your tank. it also makes you vunerable to anyone who wants just shoot at you from the sides or the rear. (those side mounted weapons wont help either, they actually restrict you from tight spaces.)
your tank is an easy target on all sides and has little ground clearance due to the low hull. it looks like a flawed version of the m113.
it looks good though
i suggest a small top mounted turret similar to that of the bradley apc, add some more smoke disgargers, strip the side weapons, cover the tracks, mount the vulcan looking weapons on the turret as a anti aircraft gun and you should be all set!:yes:
it looks great, i didnt do half that good when i first started.