I decided to make some blunt weapons because they’re shiny and pointy.
Tell me what you think, any improvements etc. 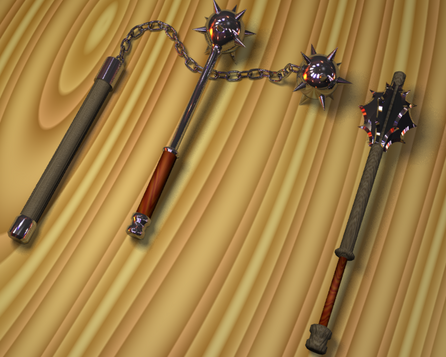 Update: Added weapons, improved wood texture, widened handle, added bumpiness to weapons, changed HDR (yes it is the uffizi probe, it was the only one that I could get good GI results with).

WOW. I love this stuffs.
What about that left piece add chain and one or two smaller spiked balls? And try steel mace. Any “fantasy” spikes?

http://kaucukovnik.borec.cz/index.php?menu=12
On this web are weapons that i do. For your imagine

I dislike that right mace. Its strange. Too thin handle.

The one main problem I see is that there are no trebuchets.

Seriously though, those look awesome! Unfortunately since I’m such a noob I can’t offer any rendering advice, but the handle on the mace on the right is a bit too skinny and the wooden background looks fake. Try making this mace…

thats a sweet mace, im going to model that for sure (i mite make it shiny though, ooooh shiny)

Seriously, that LOTR mace does not convince me.
Useless in a battle because it’s way too heavy.
Medieval maces were lighter and smaller, much like the one D_Money modelled although that one looks maybe a bit too small.
But then again, it’s hard to get an idea of size in your render.
P

Good modeling in general but the handle of the right mace will break at first clash, try making this thicker. And I’m ok with the fact that the wood looks a bit plastic.

good modelling, i suggest you use a different hdr image, one that is a little less purple, and a bit brighter. Maybe add a higher detail wood texture, but as far as modelling is considered it’s looking pretty good

Seriously, that LOTR mace does not convince me.
Useless in a battle because it’s way too heavy.
P

Not if you’re a Nazgul.

that is a really nice metal texture

This is a matter of personal preferance, but I think everything would look better if you went with a darker iron type look instead of the brighter steel look. The bumpyness really helps the metal texture, it makes them look more authentic. The first time they were too shiny and looked like modern reproductions made on a lathe or something. I would still make the handle on the modified mace around 10-20% thicker, but at least now it doesn’t look like it’s gonna snap the first time you use the weapon. (Very) Nice job! As far as the Witch king’s mace, yes it is insanely huge but Peter Jackson wanted it that way. A lot of the people from Weta Workshop thought it would look silly since it was so big, but in the final film it really works and you think “HOLY CRAP Eowyn’s toast!” instead of “That mace is way to big to be real.” Odd, but it works somehow.

[Edit] You seem to like shiny, so maybe you could try some swords. (Anduril, wink wink, nudge nudge)

This is a matter of personal preferance, but I think everything would look better if you went with a darker iron type look instead of the brighter steel look

I’ll play around with the color and darkness a bit.

Thanks for your comments

would you be able to put them up for download?

If you ever decide to make more swords, here’s a good Anduril reference pic. link
My only regret is that I can’t model it myself yet…

would you be able to put them up for download?

Hey, for sure, I’ll put them on turbosquid for free, (price=$0) its the only 3d model thing i know of and im not familiar with any filehosting sites. Also I have updated the image, it now has DOF (zbuffer and lense blur in photoshop, i could explain how if anyone wanted, its a cool/quick way of getting DOF)

http://www.turbosquid.com/FullPreview/Index.cfm/ID/297102
Here it is, have fun playing with it

Make sure to show any tweaks or improvements you make here.

:o :o :o . Those are awesome. Just downloaded them

Very nice work. However if you want something more historically accurate or specifically actually usable, then reduce chain length to 1/3 of handle length for flail and morning star like weapons. Any person trying to weld some of those weapons would quite literally either kill or maim themselves in the process of striking the enemy. You’d be screwed before your blow landed, if it could land at all that is.

A lot of weapons presented in fantasy art are often totally impractical if not impossible to use.

Any person trying to weld some of those weapons would quite literally either kill or maim themselves in the process of striking the enemy.

Welding? Right on the battlefield?