Hey Ho!
I’ve noticed, that almost every CG artist has to at least once in his/her life make either a gun, guitar, or a car. So… here’s my Aston Martin DBS 2010 Carbon Edition. I’m uploading renders in two versions, simply because me and my girlfriend had different opinions on which version is better

So, hope you like it, comments as always are welcome, and well, please let me know which image version is better in your opinion! (if you choose the darker version, I’ll win a bet, but please be honest in your judgement :)).
New renders may come (close ups or stuff like that, but I’ll need a while to render them). 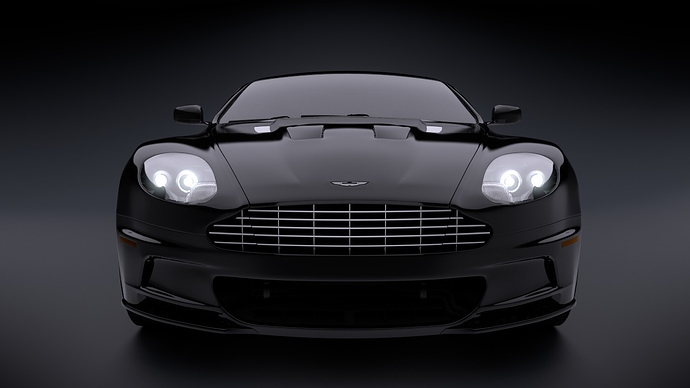 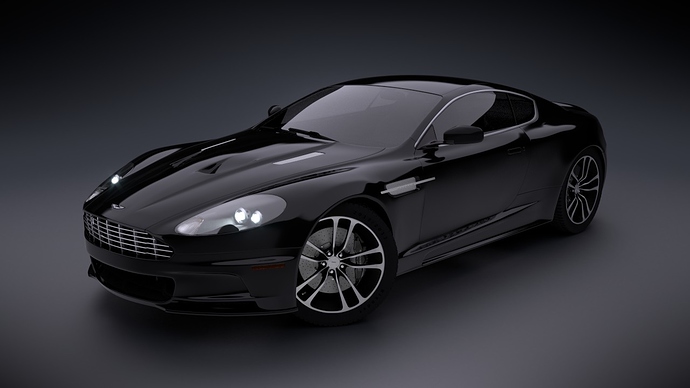 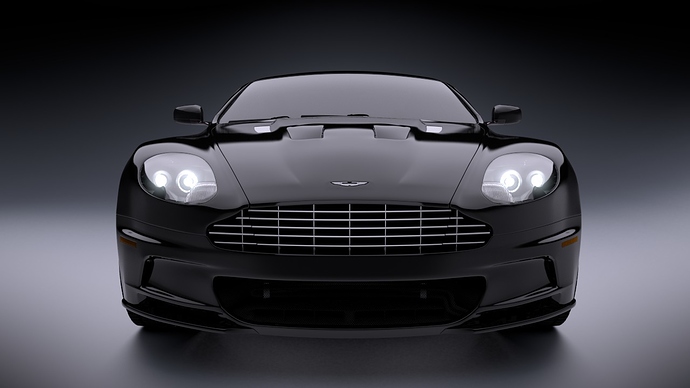 This time I think you win against your girlfriend

Nice model and nice renders. Just to be critic, maybe the wheels are too flat. Awesome job anyway!

Great work, Cherry! Your modeling and materials look very nice. Did you find it difficult to light the model? Cars, and shiny things in general, can be very hard to light sometimes. You’ve done a very good job here.

And I actually prefer the darker images a bit more. I feel the lighting looks more natural in them. Also, with the darker backdrop, the details of the car (being dark itself) are easier to read. But that is just my opinion, some people will prefer a punchier image.

I also like classic cars more… than modern. A DB4 maybe?

David Bogas, the tyres in fact may seem a bit flat, and it may be due to the lighting I used. But I assure you, they (as a model) are not flat at all

James Candy, well, lighting cars may be difficult indeed, and I tried several ways of lighting it, and many different light setups on this scene. I tried HDRI maps (if you’re interested in nice HDRI studio lighting maps, check Zbyg’s profile on Deviantart - he’s got quite few of them available for free download), normal lamps, and emission planes. And finally, I decided to go with a very simple studio lighting, used in real car photo session. There’re many tips and tricks on how to light a car in studio photography on the internet, and they come in very handy when lighting a CG studio scene. If you’re interested in videos I’ve taken inspiratin from, let me know, I’ll find and post a link to them here. So, after all, was it difficult? Yes and no. Yes, because to light this one, it required a lot of tweaking and changing light setups to get the effect I wanted. But at the same time, it wasn’t really difficult, more it was just fun to play around with those lights. And there were few light setups I tried on this one, that were very interesting, and I just may use them on some other model some day. The clue is not to get frustrated when you’re not achieving the effect you want at the very first try I think, and at the same time, no to be satisfied with the first setup, even if it is satisfying, because the third one you come up with may just be better

Christos, are you suggesting I should do DB4?

It is a nice one I have to admit…

Thanks for all the comments guys!

Good work man. It’s really difficult to nail a shiny black car! I just wish it had just a hint of color - maybe different color temperatures of the lights. Works just as well without it though.

I like the brighter version, but what’s with the weird (spotty) shadows under the car?

The black version is better, congratz for winning the bet

but model something under the car because it gives some false shadows under it.

Thanks for all the comments!

anuraag_01, thanks for nice words, as for the lighting, it’s not really plain white, it’s blueish, but very slightly… I tried several colours of either lights or background, and chosen finally the setup that in my opinion worked best for the car, which is the one I uploaded

Piotr, KingoSpeed, how could I not notice those wird shadows? That’ll remain a mystery to me… But! Thanks for pointing that out! It seems, that the glossy part of the ground material rendered somehow strange. I excluded the glossy part in compositor, and tweaked the shadows just a little bit (in the image with the front view, a problem occured simply because while rendering I completely forgot to turn on a light masking mesh, so I just painted those few pixels that were too bright). You can see the effect below. Also, KingoSpeed, there’s a separate mesh inside the car masking every (or I hope I covered every) hole in the car, including air inflows, chassis etc. Still, I don’t really know why it rendered so strangely. Maybe I messed some render settings? No idea. Anyway, I think I fixed this for a this render, and won’t bother about it untill my next car (if it’ll ever come to the moment I make another car that is, but that DB4 is tempting I admit :-)). 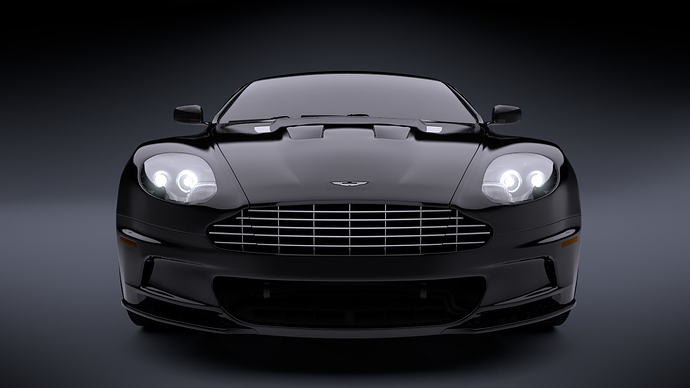 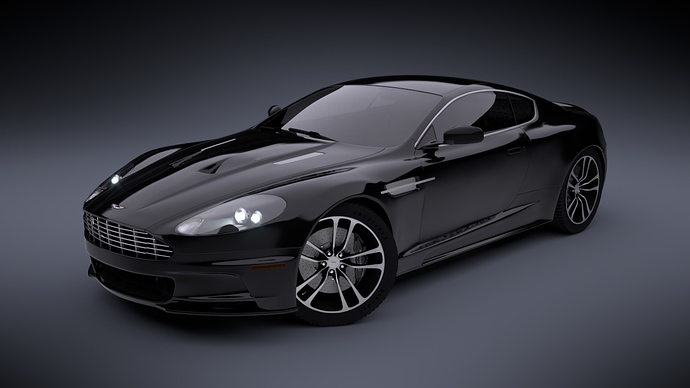 Kramon, I don’t really get what you mean. The model is pretty detailed, it’s just not that visible on those particular renders. Here I have some printscreens from viewport (not really a good quality, I didn’t really feel like waiting for my GPU to process the stuff properly, and yeah, I did separate parts just to be able to use my GPU, cause my CPU is sloooow, and my graphic card can’t handle the whole model and studio setup). I modelled the car trying to achieve a sensible level of reality. Though, I admit, that looking at it now, I could improve it here and there (I modelled this car almost a year ago, and learned a lot since then). Anyways, I’ll do some close up renders, as soon as I have enough free time, so be patient 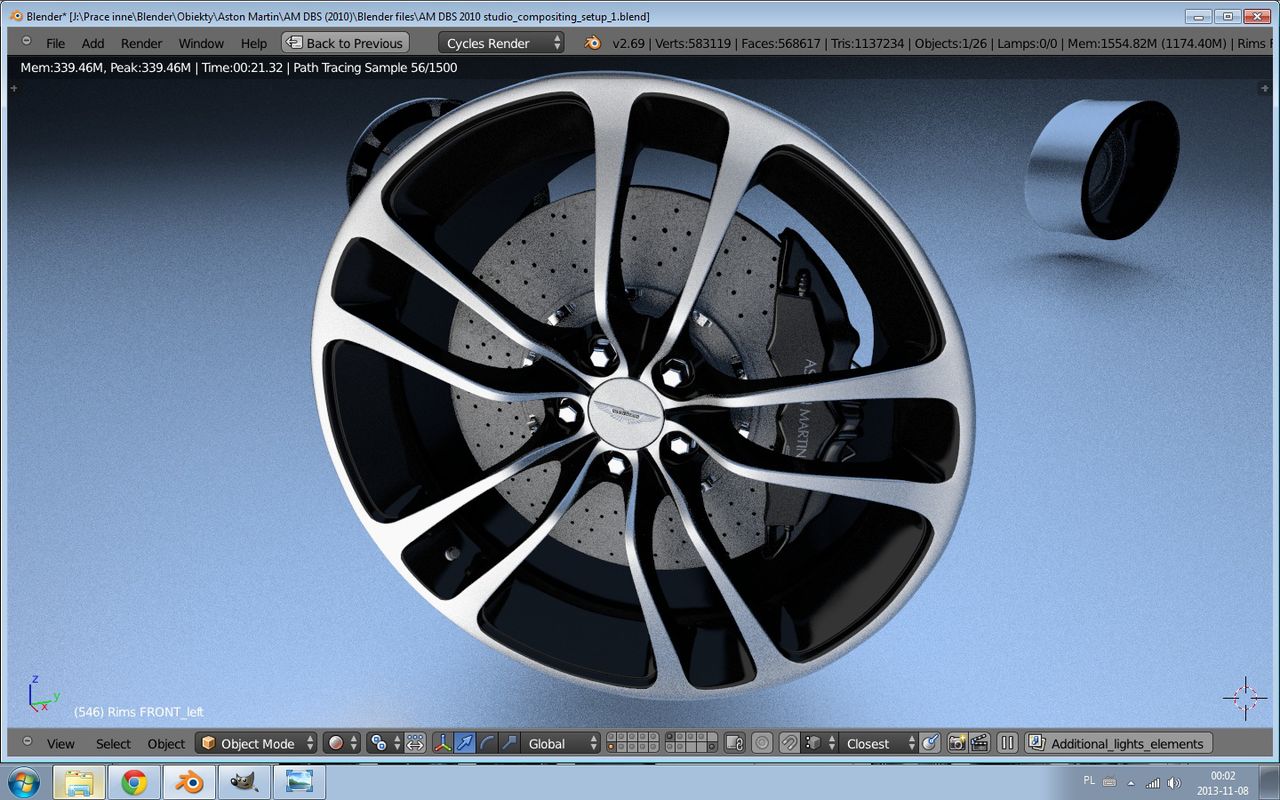 How did you get that backdrop that certain way? It’s a soft black with a white ring around the car. I want a backdrop similar to this one in one of my projects. If you could tell how you did it that would be great.

Nice model and render Cherry! You’ve got a fairly detailed model, along with soft studio lighting. I like it a lot! Keep up the good work!

Thanks guys for nice words!
coolfield7, as for the background, it’s a plane modelled in a certain way - for each shot a bit different. The car is lighted with a single light from above (plane with an emission material), and tha plane is curved in the manner that it can catch the light in certain areas, and in some it just fades into darkness… I have no idea whether that explanation makes any sense, so below find some screencaps of the setup 1 and 2. After rendering, I did some compositing, but nothing fancy really. The setup is different for different shots, but if you want to use just one plane, you can change it’s shapes easily with shapekeys. 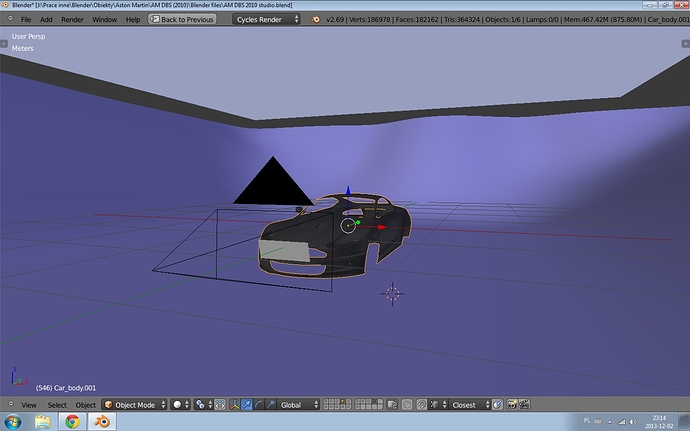 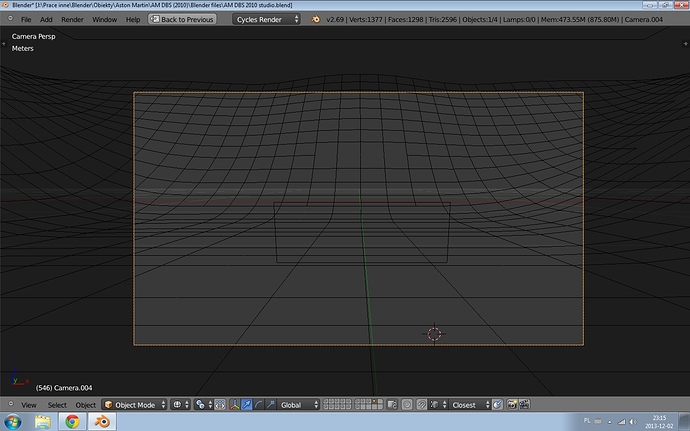 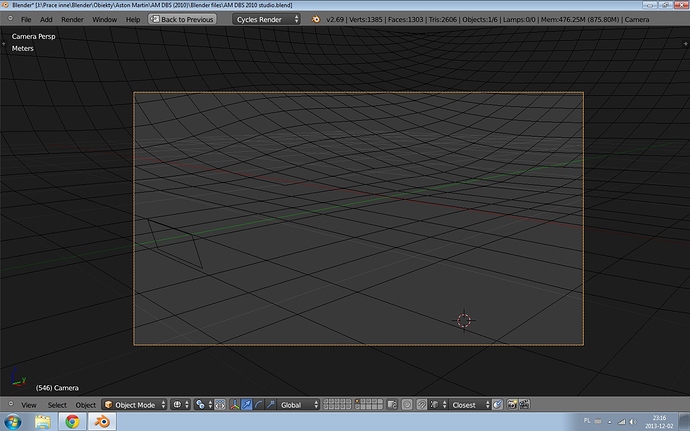 In the first picture, you can see the car, light source and ground, on the other ones, the ground and it’s curvature in two different shots. I hope that my explanations are clear enough, but if not, let me know, and I’ll try to explain better how the setup is done:-)