At the right time

Hi, lately I’ve had fun playing with volumetrics, so the other day, while watching the sunset I realized two things, first that even some “fugly” residential buildings as those can be redeemed by the enviroment at the right time, and second that trying to recreate that scene in blender would be cool.
For this scene everything is modeled, from the roof tiles to the curtains to the clouds the birds or the sun. I’ve abused particles distribution creating a series of groups one for the windows, another for curtains, another for the shades, and so on, randomly repeated to simulate the real process of change of those buildings along a 40 year span by its owners.
Each object was modeled once and using hooks and drivers I created a random subset of each.
The trees are made with the never-ceases-to-amaze-me tree sapling add on. I’ve use big sized leaves as distribution surface for a particle group instanced of some hand modeled leaves. At least in my tests the same tree renders almost in half the time if the leaves are modeled than if they are a plane with an opacity map. Since they were not going to be seen from upclose I could get away with a simple model of a leaf.
All textures, besides the AC units front panels and the leaves are procedural.
For the sunset scene I used a box to limit the volumetric effect but for the cloudy one I used the enviroment volume.
It’s been fun and on the wat I’ve learn quite a lot about materials and texture placement, also about randomness and particles and of course about volumetrics, which was the whole reason of this tests.
Subtle color correction, vignetting and signature added in compositor
Hope you like them,and any comments will be welcome. 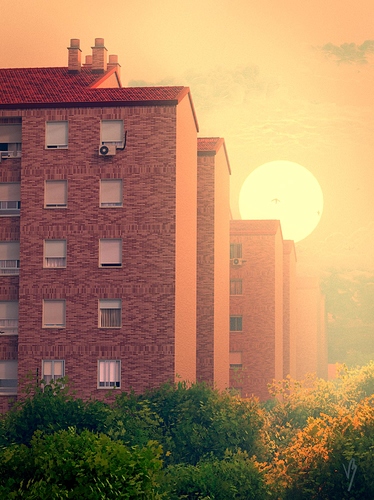 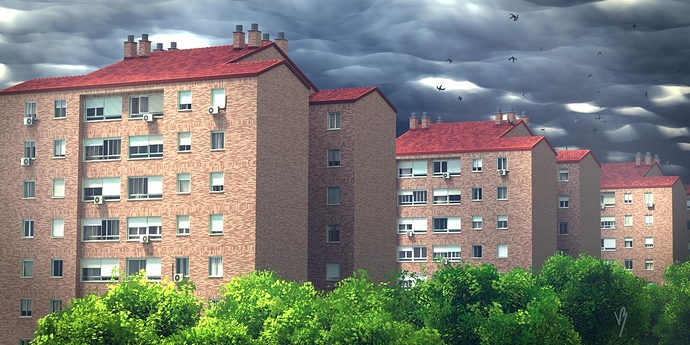 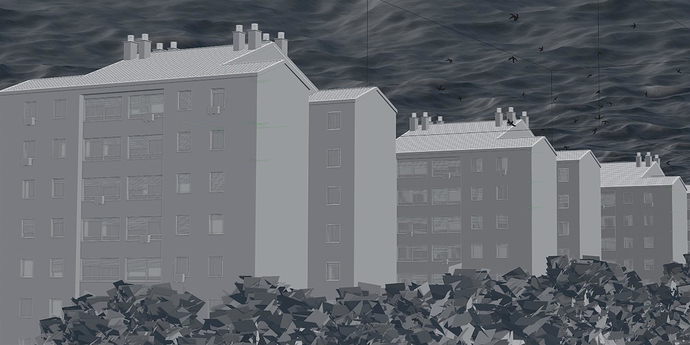 Astonishing! Awesome artwork! I like the second one the best, but that might just be because I like rains. The clouds look a little weird though, there seem to be too many holes in the clouds thinking that the clouds are so big. They look like it’s about to rain some more and the holes contradict this. But it might just be my impression. A nice render anyways!

Thank you AkiraOkihu, I rather have rain any time of the week, unfortunately here, were I now live, rain is scarce, yet sunsets are awesome, this doesn’t even come close. But you are totally correct, the second one was done using the model but without a real reference for the clouds, just the idea, but today, funnily enough, we had that exact sky and as you have pointed out the holes were less, maybey one or two. If I have the time, this week, I’ll try to setup a rainny day and try improve the clouds.

Awesome! both images are great, I love the mood of the first one. Also very interesting technique for the window/curtains/shades positioning, I’ll give it a try for sure!

The sunset one is beautiful!

Thanks rovy, particles are for sure the single most useful feature for creating non-repetitive distributions. Arrays create single copies of each mesh hence with lots of copies your memory consumption goes sky high, particles on the other hand create instances, so you can practically have as many as you want, and also you can do neat tricks with the random node in materials (and they are tons of fun)

Holy crap this is awesome, I love the second image the best, those clouds are just fantastic. Funny the GL preview looks like the ocean modifier. Superb work.
I really like the style of those buildings reminds me of a lowry style painting. Still can’t believe this is all procedural, you guys are really masters of the nodes.

Thanks NID Graphics and iamthwee, and damm, that’s such a cool idea, the ocean modifier could for sure be used for this!!!