I have this weird crash and it allready happened 4 times to me in last couple of hours, so I decided to post it on the forums.

Workflow: I create/ edit models in the 3D view, but after an average of 45 mins when I do the rotate funtion to rotate my 3D camera arround a mesh -> Blender freezes, my screen turns black and I get a “display driver has stopped working” error.

I do not think the problem is bound to the rotate function though.

It happens in both the cycles and the internal render engine.

Im currently using V2.69 64bit but it also happened to me in V2.68 64bit, although back then I didn’t bother to report because it didn’t happen frequently, but now it does.

I know it’s not much information to reproduce the bug, but it seems to happen randomly in a certain estimate of time.
Also I have the latest drivers installed and my Windows/Blender are a fresh instal.

Underneath I’ve added some crash logs of the same thing that happened to me 15 mins ago. (Sry for the Dutch) 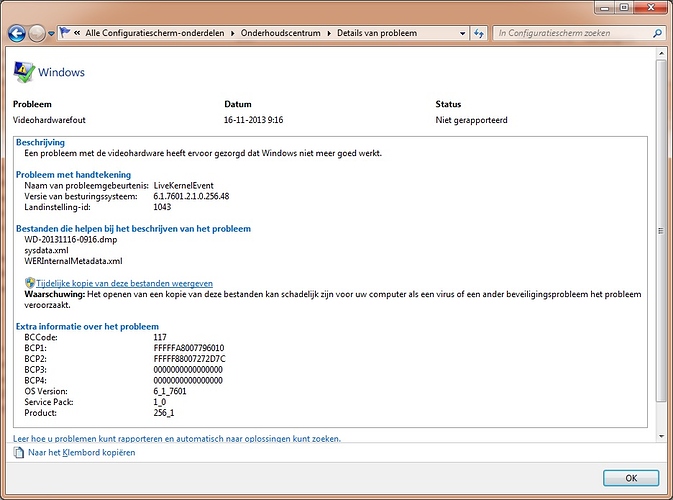 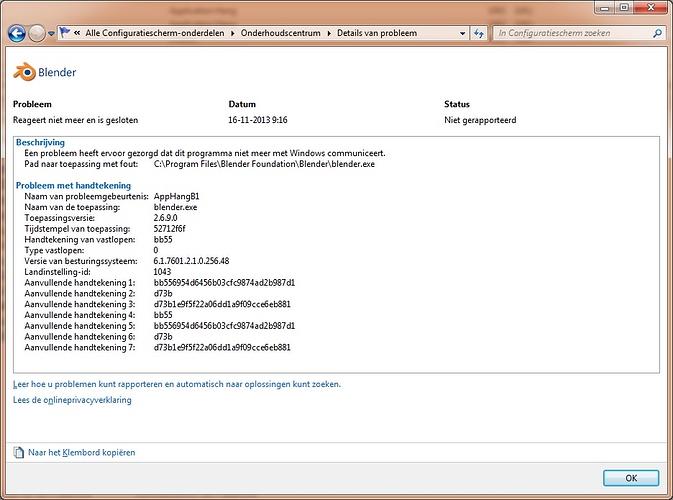 Sry for the bump, this problem is getting persistent and very annoying.
It is also not related to one particular blender file cause it allready happened in multiple files now.

Also want to add that my graphics card has never given a bluescreen, crashed or annything along those lines.

Added some crash logs in the first post. (Some things are in Dutch though)

Looks like Internal AMD driver fault, we barely can do anything as it is closed software. Most probably video card overheat or faukty PSU.

Looks like Internal AMD driver fault, we barely can do anything as it is closed software. Most probably video card overheat or faukty PSU.

Im pretty sure its non of those things, every other 3D application/ Benchmark/ Game works just fine.
Also card overheat or faulty PSU would most likely lead to bluescreen or pc termination but not a driver crash …

That said, Blender doesn’t even use most of the resources of the ATI card cause most is done by the CPU, so how would it overhead?

It can overheat absolutely independend of your personal expectations, just local overheat on crystall because Blender use pattern that no one other proigram use. Anyway, no one program can make driver crash in theory, even Blender. You can get more details about crash if compile Blender yourself with debug information. That two scrteenshots is almost useless (I cann not translate, and no actual text data attached).

It can overheat absolutely independend of your personal expectations, just local overheat on crystall because.

I have no clue what you mean, I run speedfan at the same time I run Blender. And theres no signs of overheating whatsoever. The temperature is a steady 50 degrees.

Maybe you are talking about overheat that the temp sensors don’t pickup? I’m not familiar with that kind of overheat.

As for the screenshots, yes im sorry but it’s the only logs I could find about the crashes.
I don’t understand what you mean by “compile Blender yourself with debug information”, I’m not a developer.