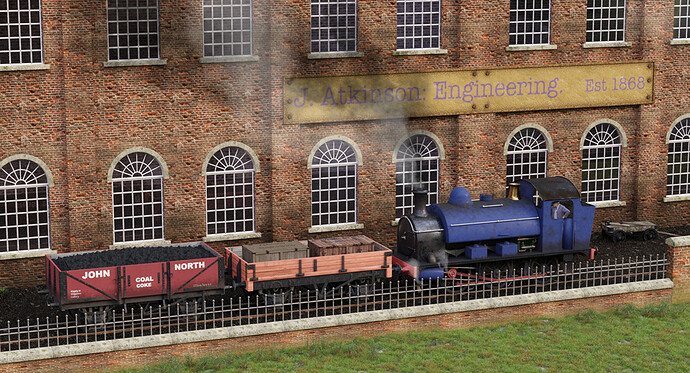 A very nice rendering of a period industrial railroad or tramway like such a factory would use. The bogeys look accurate.

But – aren’t such little engines supposed to have a name?

Full disclosure: several years ago I worked on a project that helped to locate a number of these engines where they were sitting “stuffed and mounted” in town squares and at an amusement park. They were rescued, brought back to England, and put back in steam! And, every one of them had a name, which (when restored) was proudly painted on their cabs or saddle-tanks.

My eyes could also easily accept this rendering as depicting a model railroad.

a few things that jump out are:
the repeating brick patterns - maybe add some grunge layers to break it up.
The typography on the coal car and the building don’t seem really era appropriate
the steam seems too light, perhaps increase the density

Good point about the name. She is actually called Pippa but I couldn’t get the name to blend properly with the mucky paint. I might try again.

Question is though - how to make it look real?

Thanks SterlingRoth. I agree about the smoke - I have since darkened it a little and it looks more believable. I also agree about the typography - something to look into for later. I have used photographic alpha maps on other rolling stock but really need to find the right fonts. Can you offer any suggestions?
When I move to The Caledonian Railway I have a book with exact details of the letters used so should be able to do better.
Agree about the bricks as well - this was a learning exercise and I think I have just got a bit tired of the whole project for now - more grunge would certainly help.
I will likely revisit it in the future with your advise applied.

To me, the walls look plausible like handmade bricks – as they would have been. The architecture of the factory building itself is consistent with the time. The lettering on the side of the coal car is to me believable – companies took every opportunity to advertise themselves, and to make sure that their railroad property eventually made it home!

I made these changes before reading your kind comments.
Might experiment with the tank name but it just seemed to be too vivid somehow…
Darker smoke and some more work on the bricks. Now finished in Blender 2.92 (started in 2.79). 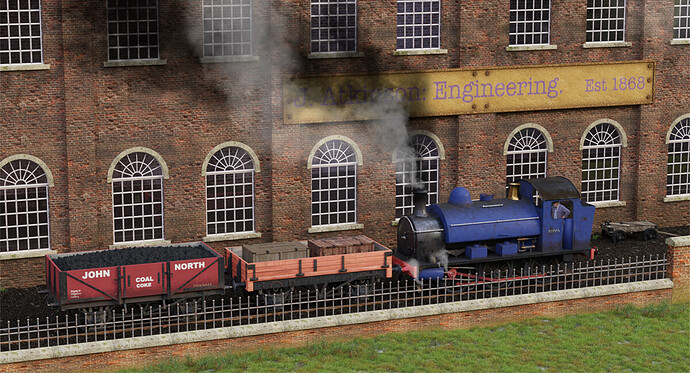