Entirely made in Blender.
Inspired by real facts .
Sorry for the lack of english subtitles. 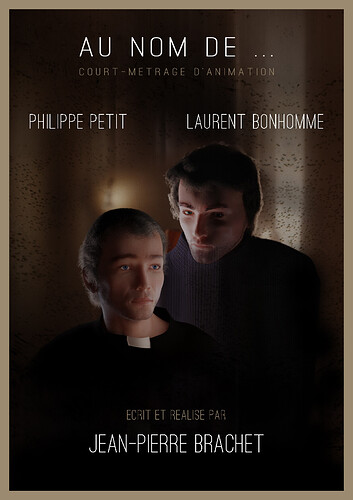 Thank you. I am touched by your appreciation on the lightning because it was a big part of the work to restore the atmosphere. The majority of the backgrounds are rendered with EEVEE and the characters with Cycles. The lightning has been recalibrated accordingly.

For the lighting, i’am agree. I find the textures very nice too. But I am blown away by the expressiveness of the characters. We believe in the characters and that’s essential when we are telling a story. Make the characters believable. Great job! Are you working alone? Or with a team?

Try embedding the video again. Maybe use (http:) instead of (https:)?
Just post it on a new line and then have a line break at the end.

Waiting for English subtitles; there is a lot of dialogue. That’s a long short film. I only understood about 5% of it.

Hello Christian,
I worked strictly alone apart from the two voices (Phillipe Petit and Laurent Bonhomme who comes from the theater).
I am currently thinking about the coupling between lipsync and facial expressions of the characters. For this movie I used separate actions but I am not completely satisfied on this point. In addition, in my opinion, the gestures are almost satisfying but can be widely improved by working on the speeds.
Thank you for your interest in this work.

Hello Boder,
Thank you for your comments. Really sorry for the subtitling. Initially the film was intended for a small number of French speaking events. The French text contains a certain number of nuances and unfortunately my English does not allow me to reproduce them faithfully. Your remark prompts me to remedy this by contacting a professional physical translator because I am aware that this is a gap.

I have a lot of questions

How long did you work on this project? What is your workflow? Renderings need a lot of resources?

I’m very impressed because it’s rare to see a project where 3D is the medium to tell a story. It’s often the opposite. We feel you have worked on your story, your scenario, your characters and their sensitivity… and even the movie poster!

I wonder who could point you to professional translators who could supply the necessary English-accurate subtitle texts for free or at minimal cost?

Hello Christian,
The realization took about a year, but the process was not as linear as you might think.

At the beginning I invented the story (inspired by existing characters). The key points were:
-The psychological characteristics of the two characters.
-The evolution of their relationship during the film.
-A coherent and causal argumentation of the situation.(documented by real situations)
-The atmosphere.
-Avoid stereotypes too often associated with this type of situation.
-I didn’t want the characters to be “nice” or “bad” “heroes”.

During the second part I wrote the scenario (about twenty lines), the treatment(?) (séquencier en français

), and the dialogues (Several pages that had to be simplified and reduced to a minimum). At the same time, I sketched the essential movie sceneries and a sort of simplified layout.

The third part was the most technical: Realization of the characters, sets, constitution of Pose Libraries for the LipSync visemes.

The most tedious part was finding the voices. (We think too often that it is enough to read a text in front of a microphone

). Finally I was lucky to find a drama teacher (Philippe) who volunteered for the role of the priest. The recording was completed in one day.

Fifth part: Calibration of audio tapes. Animation: LipSync, gestures, expressions on separate actions (in that order). Beginning of the renderings by finished sequence, during the night for the renderings of the characters with Cycles. Post processing by sequence.

In conclusion, I cannot pass any quality judgment on this work. The only certainty is that it was an interesting and technically rewarding adventure. My only regret is that the technical nature of this type of project scares away any possibility of teamwork.

I hope I answered your questions.
Cordially.

Hello,
Thank you! Finally, I think the best solution would be for me to write a translation of the dialogues myself, then for a perfectly bilingual person to be able to review the idomatic expressions and turns in English.

Thanks a lot for your very long answer! My english will not allow me to develop this exchange as i would like. But i am very impressed by your work. I can’t wait to see your next projects (the mathematician?).

Good evening Christian,
If you have any other questions that I can answer, it is still possible to communicate in French using private messaging.
Cordially.
JP.