I’ve decimated a rather high poly mesh I created, and now there are little tiny gaps here and there. Quality isn’t job #1 at the moment (since the mesh will be far away in the scene I’m planning), but even those little gaps are a big problem with my renderer.

I’m talking about little gaps that get outlined when you’re in object mode, in the middle of your object, if that clarifies at all–I just need those to go away.

Is there a function for just snapping those shut somehow?

Any input would be greatly appreciated!

If you don’t care about the topology of the mesh, just select all the verts around one gap and press Shift-F then repeat.

Thanks for the response, but shift-F doesn’t seem to do anything. I’m probably doing it wrong–what is shift-F?

Thought I’d throw in a screenie:

It’s the seam where I’ve selected the verts that shows the little gaps, for obvious reasons. As you said, I don’t really care about the topology, I’d just like an automated way to snap the vertices together so that the mesh is all connected and stuff (sorry don’t know the proper term).

Shift-F just fills in any shaped hole that you select, but it makes a lot of triangle faces.

I don’t see a gap in your screenshot. What I see is an impossible line of verts. Can you post your blend?

Thanks for that. Yeah it’s little eetsy beetsy tiny gaps. You’ll see it if you check out the blend in object mode, it’s at the seams of the bevels/sides of the letter.

The impossible line of verts is what the decimation created (which I’m actually in love with Blender’s decimation, but like any decimation algorithm there are drawbacks).

That mesh has got more trouble than little gaps. You have overlapping faces. The sides of the S shape only connect to the top and bottom at 12 or so verts out of what looks to be 100 + verts. There is no simple way to fix it in Blender. For fun I dumped the mesh into MeshLab and even with its tools I could not fix it. On the other hand I could create a much lower poly mesh of the letter S in Blender by simply converting a Text object to mesh. Here is the Blend if you want it. 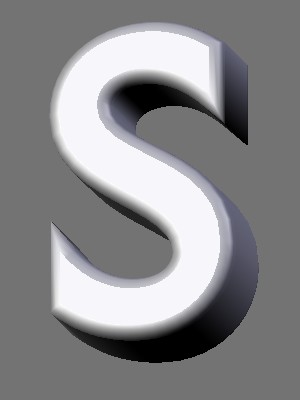 Well, okay, time to “come clean” as it were

Or really just clue you in to my intention.

A Blender font is actually how it started. What this is going to be is a game level. Inside the S. It’s going to have a very simple texture and so, like I said, the topology won’t really be seen all that well, strange as it may seem–it’s the other stuff inside it that will be more important.

So what is important to me is that it resemble nice curves as much as possible, while at the same time being low poly enough for the game engine to handle it. 10k or so is fine. Cars will drive along the curves up the walls and stuff, so it needs a nice gradient, but it’s important that it not be too regular. So what happens is I made it a nice high poly beveled mesh, and then decimated it, which gives me a fairly desireable effect for this game, actually, on the whole.

Now I hadn’t noticed any overlapping faces, although I knew there were some doubled verts.

However, just for kicks I tried the polyreducer script instead of the decimate modifier, and for once I think it actually came out much nicer. It’s attached if you’re interested.

I’d be quite open to any suggestions for a better way to achieve this, of course!