Hi all,
Using the latest build I like how when you manipulate an object an autokey warning pops up in the corner but I still CONSTANTLY set keys accidentally on things. Max used to turn the trackview red wnn autokey was enabled which was very clear and I thought, a good idea. I have added a mockup of a long a similar line… The bar would tint red once you start moving anything with the auto key enabled. 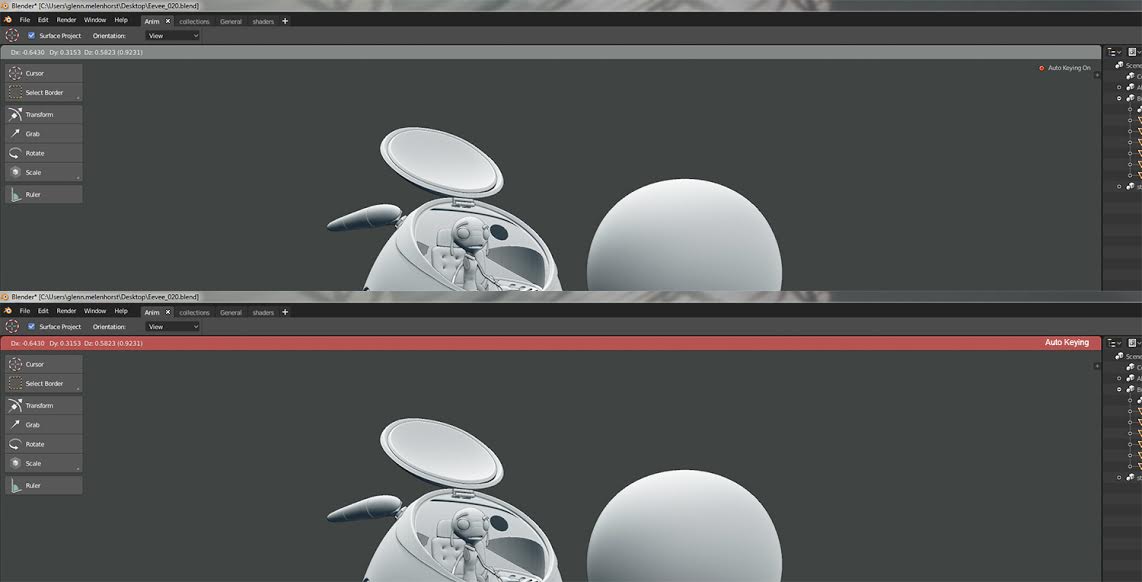 It’s an interesting idea, and is probably worth testing out a bit. I suspect though that many may end up finding it too distracting/annoying.

Having played around with different visualisations for this when I first introduced this behaviour a few years back (and having gone on to look into these issues in greater depth), it’s quite tricky striking a balance between the need to make this indicator noticeable (i.e. so that you do actually notice that you’ve got it enabled) vs not making it too distracting and/or annoying. TBH, I wish we could say right now, “if we do x, y, z, it will work” or that there’s a model/tool that we can plug in our requirements and get out a semi-accurate prediction of what our best course of action may be. But, unfortunately, we just aren’t there yet - not even close.

What I do know is that the following options were not really well recieved by the community in general:

There may have also been other variants of these, but none come to mind immediately.

So, what can we do? I currently lean towards the following options:

(These may however be too heavy handed (i.e. too distracting), but should in theory at least be a lot more noticeable than what we’re doing now)

You can’t please all the people all the time! Personally I love that the box cutter add-on puts a border around the screen when activated!

Hardops and mesh machine both put discreet but saturated icons in the cornering the screen to let you know the status and being inside the 3d view it’s very clear. If I’m manipulating an object with autokey either /both would seem to work well! No need for blinking as it’s very distracting.

Here is what I’d ideally like to see. I’d like the red notification to be a toggle in prefs (like allow negative frames).
I’d then have the bar or frame tint red when autokey is on rather than have it blink on when something is manipulated. This would be less distracting in my opinion.

This way, if users find it distracting to be notified, they can switch it off in prefs. Perhaps it should be off by default to keep everyone happy.

And while I have you Aligorith…

I’d like to mention that "Clean channels’ removes any custom handle types. If I have a bunch of keys I want to clean and they are set to vector, clean channels sets them all to aligned. I have lost a lot of work trying to clean null channels from my animation. Is this intentional for some reason?