Is there a way to automatically set up the output passes?
For instance: 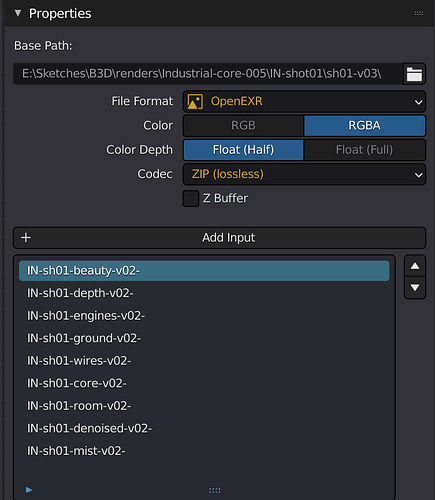 Every time I change the shot version and the output path, I need to manually rename every single pass to match the new version number.

In Cinema 4D I use what they call tokens, which are basically variables: I set it up once, and C4D does the rest. It’s as simple as typing in something like this:

In Blender it takes so much more time, with the risk of typing something wrong in one of the output passes, especially when there are many of them.

Hey blenderartists, this is my first try of an addon for Blender and I hope it’s helpful

The “Renderlayer Manager” is a free Blender addon that provides an easy and fast setup of renderlayer and file output nodes. The addon works in Blender 2.83 or later. Just try it out and get it from here: [Blender Addon] Renderlayer Manager (Gumroad) Here you will find a detailed documentation of how to use it: Online-Documentation It’s still a Beta version, so please tell me if…

Thanks, @NewVisitor !
That seems to do exactly what I was looking for.