Most recent (LOTS new, but perhaps this Decimate modifier study interests you?): 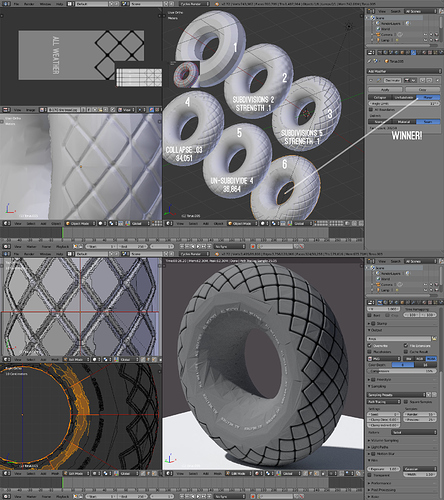 A friend of mine who’s retired Navy (Inspector General) did some research for his cousin who once loved an USAF gunner but that love was never to be. The airman died in WWII but not much was known about the final flight or situation surrounding the loss of the Columbus Miss.

My friend has pulled up an incredible amount of data and records and a medal awarded just before the final flight. After providing closure for his cousin, my friend found a museum for the medal and records and as he recounted the decades old love story, a news reporter following a different lead overheard.

The news reporter said they might like to know more about this in January '15 when my friend returns to the museum. I also want to contribute but there’s little I can do - considering how little there is for the public to see of the Columbus Miss, a B-17 G, I thought I might try my first mechanical model. 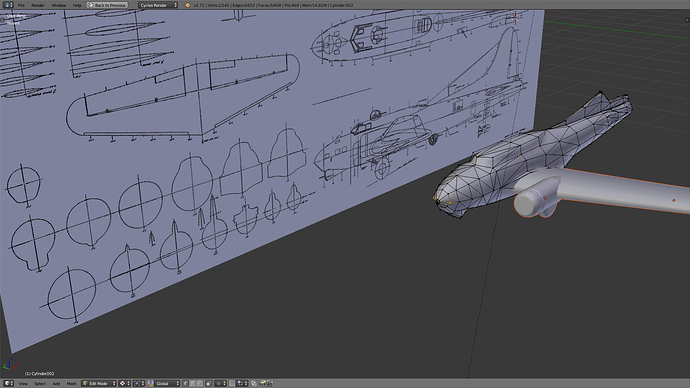 There’s a reason I’ve stayed far from this sort of thing. I have a lot of respect for the mech modelers. This stuff is hard but if I come close and get it mostly right, it can perhaps provide for simple animations or illustrations when the story about the Gunner comes around.

So this is its WIP and I invite tips or posts of caution when I do something that will prevent success.

Good start and a great story!Also, those are great reference drawings, where did you find them?

The story’s still developing too - two graves hundreds of miles apart imply that some airmen survived the crash and scattered on foot. Thanks for the encouragement! I just caught sight of that other WIP plane - holy wow!!! I’ll do my best to bring my A Game to this and still work as quickly as possible. 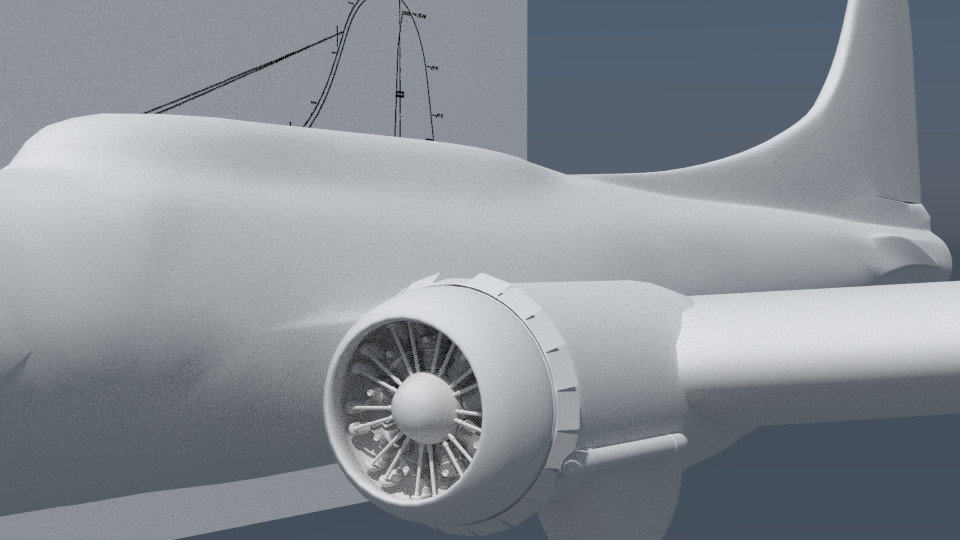 The elevations are only good for blocking the idea of the rough shapes so it’s off to as many photo resources as I can find. For a while, the model will be a combination of coarse and fine details.

Very nice start! The engines is looking quite good.

I also love the story.

Big thanks, ShadowCamero! Some of today was making those parts more economic and accurate. Knowing that everyone has their specialty, I feared that some airplane mechanic would call me out - those parts were modeled after a small private plane. More digging revealed some accurate images AND as a bonus, I got the poly count down from last night’s 8,694 for the engine parts alone to 7,424 for the WHOLE thing. 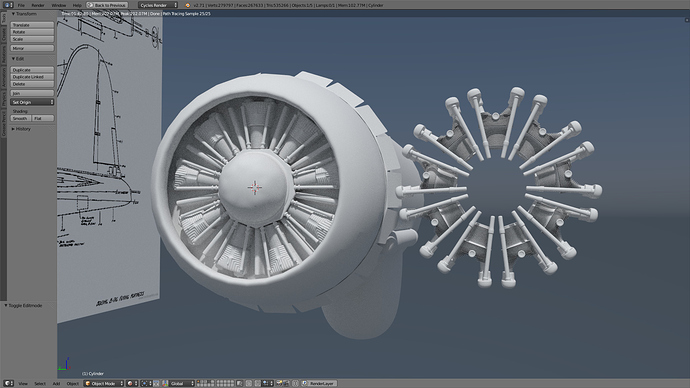 Accurate and “economic” at left. I believe that good 3D models and techniques involve a lot of going forward two steps and backward one to get it better the next time around. And tonight, the prop will cover most of today’s work!

Witold Jaworski, a huge thank you to you. Your dedication is stunning and I’m pretty sure I might spring the ten bucks to buy your pdf! (I’ve been to visit most (?) of your websites.)

I’m also pretty sure that I have bitten off more than I can chew with this project. “A plane,” I thought. How hard could it be? Ha! So hours and hours and mistakes and more mistakes later, I finally have 11 edges highlighted that mark the location of the raised ribs for fabric on the elevators - red marked crease at front is the boundary for the de-icing strip. 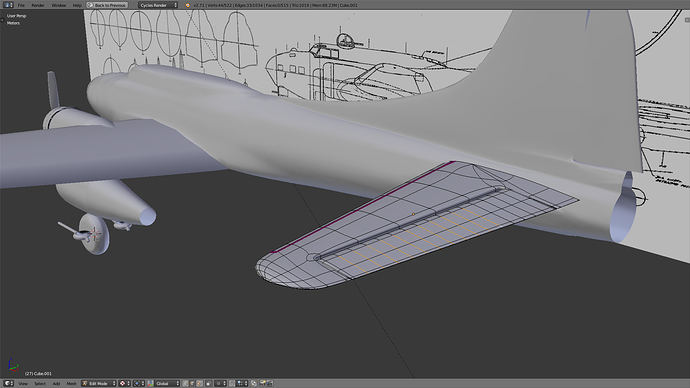 Hard surface modeling requires such a completely different approach than I’m used to, … and the accuracy! My goodness! I’ve been modeling at a LOW level and viewing in 1 and 2 subsurf. Beveling Edges helps to push the geometry to expected points matching the diagrams but should I stop that and begin Mean Crease and Mean Bevel?

I really can’t count how many times I’ve started parts over and over again. Deepest respect to your hard surface people out there. This is so much harder than I expected.

Good start! I agree with Witold in the fuselage area, IMO too many tris…a very interesting approach!

Is funny becaue when I began my F-16 I had the same thought as you “a plane, how hard can it be…its only a cylinder and a few skewed planes for wings”…all I can think of right now is of Nelson Muntz with his classic “Ha-ha!”

Mind you, I’m enjoying each step of the way and I’m also learning soooo much, just keep at it and for what I gather this being your first hard surface model, it’s looking great.

Thank you for visiting my site!

I finally have 11 edges highlighted that mark the location of the raised ribs for fabric on the elevators - red marked crease at front is the boundary for the de-icing strip.

A quick tip: I do such minor surface details as fabric bulges or seam lines as bump textures - it is much easier than to model them “in the mesh”. What’s more, the effect on the rendering is very similar (Cycles handles bump maps really well)! The details of this method are described here.

Great tip that I’ll keep in mind. It’s struck me as I’m moving along that I don’t always know when to let the details occur in the maps instead of the mesh. 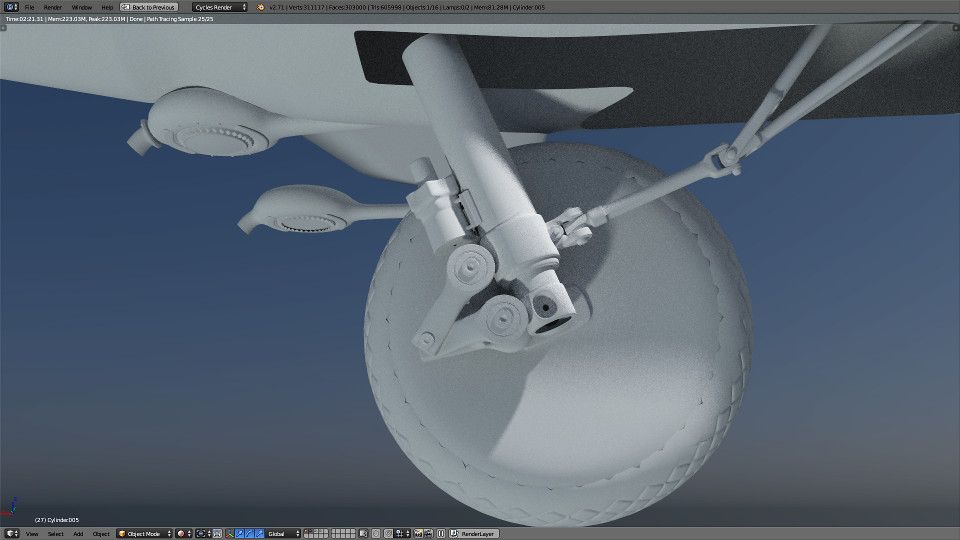 A quick break from the flight surfaces to visit the superchargers and landing gear. Hydraulic hoses are waiting for later, so it’s just cylinder, scale, rotate, duplicate, repeat, but it’s really rewarding. Tire treads are actually hard enough where I’ll have to go and watch that tread tutorial I’ve been avoiding on YouTube.

As an aside, although it’s not needed, it would be a lot of fun to rig and constrain all these landing gear rods one day. Worth it or too much trouble?

In my opinion, rigging the gears is totally worth it. Even if you aren’t planning to do animations with it, it’s just nice to have, and is pretty fun and rewarding to do.
Great work so far

This is really fantastic! I did some landing gear for a fighter jet and know how difficult it is to make them functional (At least it was for me) so I dumbed it down a bit as far as the actual model. This work is outstanding.

Landing gear is looking awesome! keep on the good work…I would rig the landing gear as an excercise, besides having it rigged at this stage would save you time if you ever decide to animate the plane.

in your thread for rig wheel is it possible to further discuss how to implement that rig!
pr I can open a new thread
tried to follow your tut but a little difficult to get everything right !

(…)tried to follow your tut but a little difficult to get everything right !

I am glad that you have found this article interesting. You can see more details about this solution in the corresponding book section, available for online reading in Google Books: it starts here.

Though maybe not ideal for every tire solution, I found Modifiers > Displace with an image texture to be acceptable for my liking. Full Displacement creates five-hundred THOUSAND faces on these diamond treads and “All Weather” markings. So I present Modifiers > Decimate testing which cut things down to 30+ K for those interested…

No matter the image, a simple one in this case, Displacing can skyrocket your poly counts. Baking from here is great for some solutions, but I wanted chunky treads without the poly edge. The top three show the standard Torus and 2 and 5 subdivisions (Smooth shading ON). Decimating the results can go from nearly similar to utterly unrecognizable. I tinkered with three duplicates to find the point at which the geometry teetered near being useless.

The story that I’m illustrating for centers around the most perilous gunner station: Our hero was the gunner in the belly of the aircraft. The only access in and out is before and after flight through that little bubble. That gunner never enters the fuselage. Can you imagine? This is the reason I’m going both high and low with the poly count.

RickyBlender, the parts you ask about are Superchargers that afix to the bottom center of each nacelle. I needed their blocking but haven’t decided yet how high poly to make them but yes, it all starts high! That’s just my inexperience. One example… 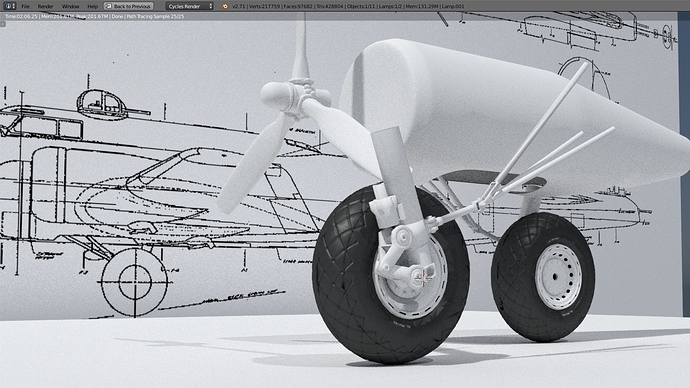 Thanks to RickyBlender’s comment, I spent a day pulling geometry out of the landing gear and adjusting it for smooth shading only, not Subsurf. So the basis is now about 400 poly lighter (between two) plus thousands without the Subsurf. I used this chance to test the look of the tires too and begin wheels.

My new question centers on the wings. I know there are flaps, but I’ve not got any references for this plane with flaps extended FROM ABOVE. I see from the bottom in many images, but I’m not sure where the breaks occur on top of the wing! Was the engineering then similar to now? Could I just use a modern example? 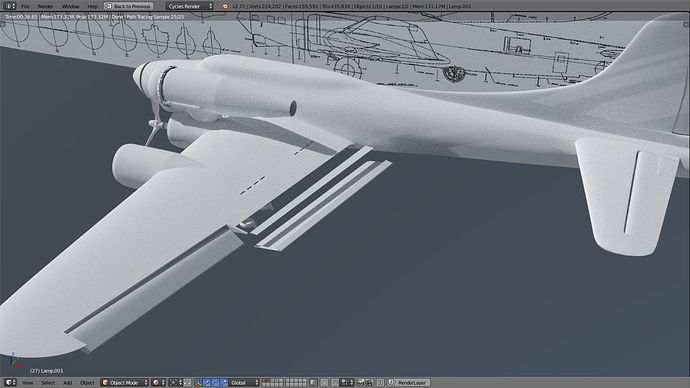 Witold, your contributions have been invaluable and you have cut days and perhaps a week or more off my learning curve! Deepest thanks! These Mean Creases, low poly counts, aileron parts and forthcoming transparent holes and bump combos wouldn’t look this effortless without you.

P.S. The distance between the vertical centers of the two front tires is 21 feet, 1.5 inches. My townhouse is about 20-feet wide. I can’t wait to model this thing sitting on my house just for kicks.

PPS The propellers are just high-poly proxies. I know their bolts and hardware are not very good.

tires are not easy!
if threads are deep need to model it 3D!
did a tire for a bicycle and ended with 90 K verts I mean they look good but high res!

Why did you start the hull with all quads and tris mixed up? That tire is a pain

Couldnt help myself and tried a quick setup… weird thing is that if i calculate it correct i get also 500k vertices, but does depend what quality i set subsurf 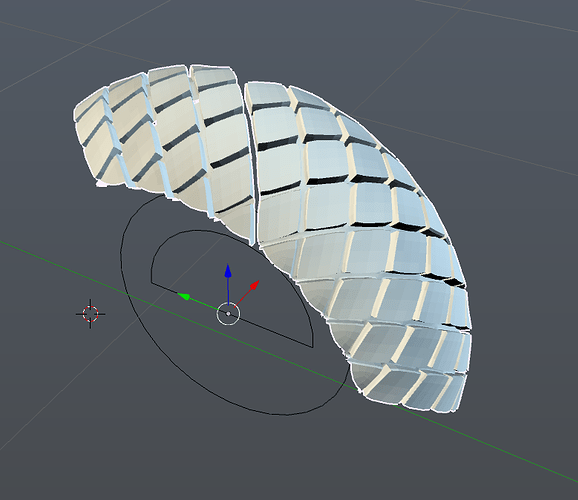 Sorry made a miscalculation somewhere, its about 154k for 1 tire. i have small problem with the array mod, i cant get the front and end to merge proberly but thats easy fix later 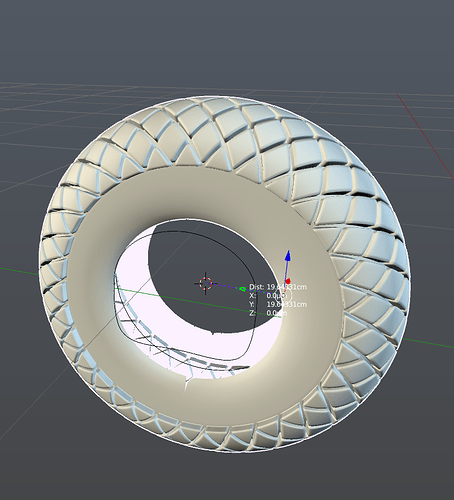