I have a particle simulation to mimic smoke coming out of a chimney. My animation will be a 360 rotation around the model, but I do not want the smoke to animate during this time. Instead, I want to pick a single frame from the smoke simulation, and force the particles to stay in this position - any ideas please?

Thinking I could bake/cache in some way, but not sure it’s the right direction.

You can do this but it is a quite annoying workflow.
Open your simulation and play to the frame you want to extract.
Change your cache type from Replay to All. This makes the Bake All button appear. Browse to the file path specified in the cache, on Windows this is typically under AppData.
Inside the Data folder you will find a series of VDB files. Copy one of them to your desktop and close Blender.
When you close Blender all that temp data goes away. However, you now have a single VDB from your simulation that you can include using SHIFT-A/Volume/Import Open VDB.

Thanks for such a quick response @Atom. Not sure I see what options you’re referring to though? I’m using Blender 3.0 on Windows. 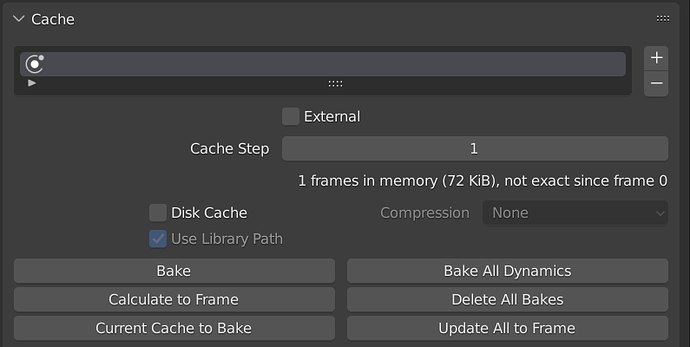 This is using a particle system, rather than a physics simulation - which may have been the confusion?

At some point, you are converting your particles to smoke, right? That’s where you’ll find the cache options I mentioned. Just give it a try with the Quick Smoke on the default cube. You should be able to extract a single VDB.

I’m not at the moment. Each particle is just an image (via “Image as Plane” of a smoke texture).

Actually, could I “convert” the particle system via the modifier tab to a mesh? Then delete all the key frames I don’t need in the animator tab?

Or supply the existing particle system as a flow source to a smoke system.

Thanks @Atom. It turns out you can just use “Make Instances Real” on the particle system’s modifier at the frame you like, and then it’ll rendr that into your scene as static.

Thanks for the assistance.