I’ve found that when I do a full render bake of an object with a texture applied, the texture ends up looking different from how it originally looked before baking it.

The texture I applied to the material wasn’t one of the preset procedural ones like ‘clouds’ or ‘stucci’, instead it was a downloaded image of plaster which was just mapped to orco and then baked using full render bake.

In the attached image you can see i’m trying to composite the baked texture from one scene, with the specular and reflection passes from another scene with the same objects in order to speed up the rendering process during animation.

Hopefully you can see, if you look closely, that the render preview in the top right shows how the texture originally appeared before baking (this is how I would like it to appear) and below that you can see the final comp render with baked textures. Here the texture appears larger and just simply doesn’t match how it looked before.

Could anyone please tell me what I might have done wrong?

Many thanks in advance. 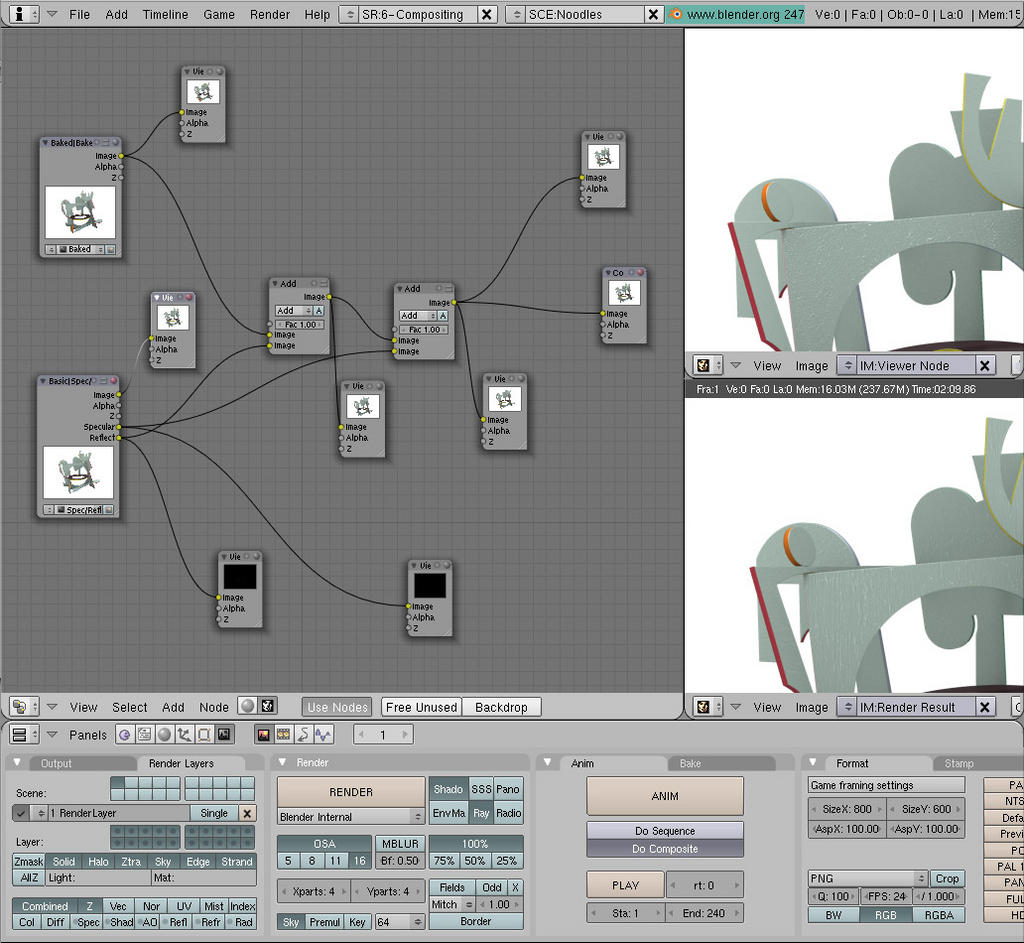 Sorry to bump my own thread, only I really need a solution to this soon as I’m being paid to do this project and I’m getting behind schedule.

I’ll try and explain my workflow for baking this texture.

(I recently discovered that if your model is made up of lot’s of different objects you want unwrapped, you can select them all and tab into edit mode on just one of them with all the other objects still selected and, with ‘Share Tex Space’ selected in the smart projections panel, all the objects UVs will be mapped and correctly scaled relative to each other)

Hope this explanation isn’t too muddled.

My guess as to what might be going wrong is that because I’m attempting to use an ‘image’ to texture the material, instead of one of the true procedural textures like ‘wood’ or ‘stucci’ and so forth, blender somehow isn’t able to map it accurately when baking it. Can anyone confirm this for me or suggest a way of getting around my problem?

You said that you made a copy of your object and baked on that. Then you applied the baked texture (which you saved) to the org model. I wonder if your problem might be in wrongly unwrapping the org model.

And I don’t believe that you should use the same material for all objects. Use 1024x1024 textures and bake the objects independently.

No the original model isn’t unwrapped at all. The baked texture is applied to the same model it was baked from (which is the copied model). I’m just using the original model to get render passes for specular and reflection so they can be composited with the baked model.

Maybe it is better to make separate materials for each object of the model, only there are about 15 different objects making up the model and it just seems quicker to use one material for all of them. Doing it this way hasn’t caused a problem for me before.

Thanks for a reply anyway

So here is a blend file with a simple cube copied in two separate scenes.

‘OriginalScene’ shows how the texture should look when it’s rendered. (Although actually the bump map doesn’t show very well at all on some faces of the cube)

‘BakedScene’ has a copy of the cube with the baked texture applied. Just render from this scene to see how the texture doesn’t match the original scene at all.

Could anyone tell me why the baked texture is so inaccurate? And what is the best way to get the textures to match in both scenes?

It would be a great help.