So, basically this is happening 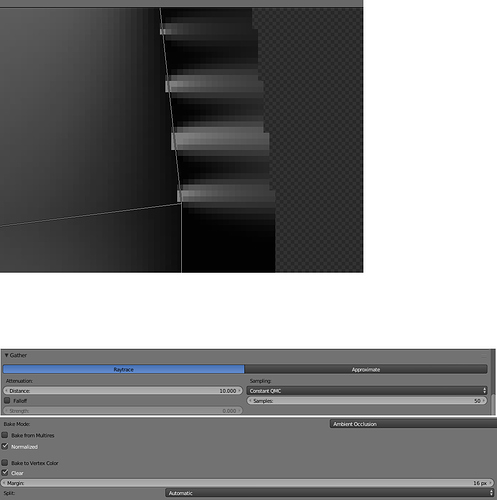 Also, few inconveniences:
-Is it somehow possible to queue ao baking tasks? It would be nice if I could start this up and let it work over night instead of baking the objects one by one manually (it’s quite unpractical with 20 objects). Would multiple blender instances with the same file opened to achieve this screw me over?
-To make things look smoother, I added a subdivide render modifier. Catmull-Clark would be nice for some objects (because they’re rounder), but it will result in the baked areas being too small, thus not properly filling the mesh.

Thanks for your time and advice.
Cyba_Mephisto

It’s probably caused by the oblique angles in the UV map (noting that the ‘bleeding’ tends to be within the pixels the line goes through).

For making, you might want to line every edge in the map to the pixel borders (the UV editor should even have a snap function to help with this).

Works (aligning the edge). Thank you.
However I have this issue with a “few project from view”-maps as well, where I chose said projection method to properly texture the object after. Any other solutions for this?

To note, you would not texture the object with the exact same UV map. Instead, create a new UV layer for the textures.

That’s not possible for me because I’m using the models for a game which forces me to bake ao into the texture (thus all having the same uvmap). Is there any other way? Maybe I could apply the ao as a texture in blender which I then project onto the uvmap meant for textures?

What engine are you using, the vast majority of good quality engines allow at least 2 UV channels per object (even the BGE).

I think it slipped through the cracks when you said “good quality”.

Well, the only other way I could think of is to break the UVmap into a bunch of individual islands so that the bleeding does not have any adverse effects.

This would also mess up your current texture as well, you might need to paint your own.

Meaning each face would be its individual island?
(I’m painting the textures on my own anyway)
Would that work in this case, because what you see on the screen is already a border edge of an island (there is nothing to the right).

If it’s already an island, then I’m not exactly sure what’s going on here other than the possibility that it’s a situation where the information would change a bit once you go just beyond the face.

It might be a bug even or a limitation of the baker (ie. doesn’t have proper support for extending information beyond the edges in a smooth way).

Found my solution:
“Smudge”.
Basically I open the map in paint.net and use the smudge plugin to push those edges away along their normals.
Works fine, you won’t notice someone ever smudged these (until you look at the ao map ofc).