I started David Ward’s tutorial, creating a stylized dragon, some time ago. I watched the first few tutorials and managed to model myself a dragon that I rather liked though it looked nothing like his. Then I created seams and UV maps and such and tried to bake it. At this point I’d been doing well with solving little problems I encountered but this baking thing stumped me. No matter what I did I never got more than a blue square where my dragon should have baked. I thought something must be wrong with the dragon so I made another and when that failed I tried a dolphin and when that failed I tried a simple cube. This worked, I did the same things to it that I had done to the dragon so I had no idea what was the matter. I gave up in despair and did nothing with Blender for the better part of a year. I like dragons and I recently wanted one for my desktop but couldn’t find one I liked and I thought of my Blender dragon. So here I am. I would like to finish the tutorial and get him colored and walking and stuff. I’m using Blender 2.61. If anyone would care to help me out I’d be grateful.

well i have a problem with baking too but yours i guess i might have the solution for xD
first you must make sure that (selected to active) is on
well it depends on your way making your normal map
like (and thats how i know normal mabing is doing) having a high resolution model on covering your model (it can be a copy of your model but sculpted or some other ways) you should choose the high res model first and then the low res model and then bake
the best settings for it are
bake mode: normal (of course if you want to make a normal map you didnt really say if you want to make one but thats what baking is usually for)
normal space: Tangent
under selected to active…you should give distance and Blas some values

Ok, it’s been awhile and I’ve forgotten some things but yes, I was trying for a tangent normal map. I had the high res and the low res models and had selected to active checked. I hadn’t put any values in distance and bias because I have no idea what they do but I tried that and it didn’t seem to change anything. This is how it looks after I’ve hit bake. It looks about the same regardless of how long I let it sit. 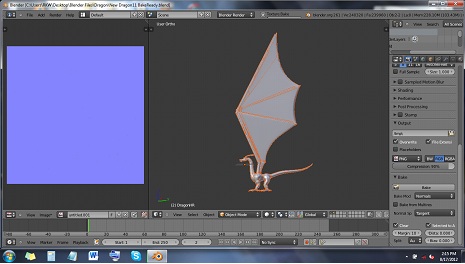