I’m doing my first - up to now - unassisted render, using Cycles. I’d appreciate advice in getting the lighting balanced.

In the second render, I have increased the emission on the front plane to 5.8 to give some light to the background, but this has over-lit the figure. I have also replaced the rim light with a spotlight - strength 10.3 - coming through the window. Was hoping to emulate a shaft of sunlight using volumetric light, but can’t find a setting for this. The spotlight doesn’t seem to be contributing anything to the scene.

So, what I am looking for is a lighting setup which gives more light to the background, as in the second render, without washing out the figure, as well as a shaft of light coming through the window to act as a rim light.

Any other C & c on the renders most welcome 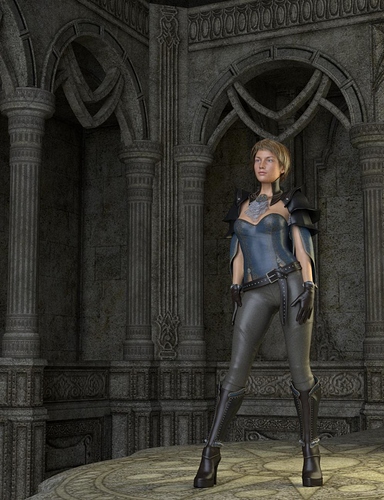 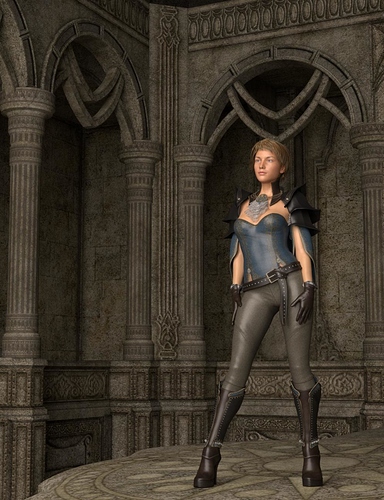 This is a great render!
One solution would be to use render layers, one for the foreground and one for the background, and to use nodes to adjust precisly the contrast of each layer.

Aah - layers - never thought of or tried that, must give it a try!

Also: never think that “the final, finished scene” must “pop out of the renderer, fully-formed,” like Venus popping out of a clamshell someplace. It does not … and, it usually doesn’t. There’s no particular reason for the computer to waste its time on both the heroine and the set, both at the same time. Nor does the lighting for the two, from the digital computer’s point of view, actually have to be the same … nevermind that “in the real world” such a statement would have to be true. “This is CG … not the Real World.”

Yeah - you are so right

I’m basically a modeler, only now venturing into rendering and starting to discover the magic of compositing.

Here is the reworked image - couldn’t get the sunbeams to work in this one, but figured it out in a test scene and will have another go at this one before rendering it large. 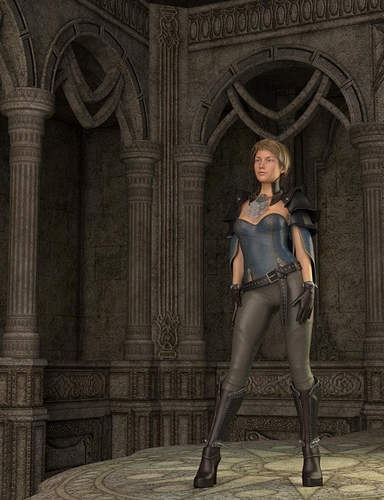 Well, there are also “impossible-in-the-real-world things” that you can do in any renderer, such as having layer-specific lights that shine only on certain things (and shine directly through anything that they don’t see) … but, in the end, you need to start “thinking like a darkroom.” A darkroom perspective builds up the shot by doing things that aren’t immediately evident in the finished print, and compositing is very much the same. Look at the “shot breakdown” videos that abound on the Internet and you will see first-hand how delicate nuances have been added one at a time, and balanced after they were rendered.

And, thinking of ways to minimize render time. (For instance, if the camera’s not moving, you need exactly one frame of that beautiful gothic background.)

Shadows, oddly enough, are very expensive things, and the computer will dutifully calculate every shadow that could possibly exist: technically correct, but not necessary. The shadows cast by our beautiful damsel upon the stone floor can be calculated separately, then adjusted for opacity, tint, and so on. Shadows that she might otherwise cast on other things might be left out. Shadows that might complicate a “real world” shot (such that complicated lighting would be needed to counter them) can simply be left out: only a CG-nerd will quibble.

Spotlights that “only cast shadows” are a great thing.

The “key lighting” on a character, if captured separately and in neutral white, can then be tinted “in post,” thereby “balancing the light” after all of the render-data has been calculated … once. The shadows cast by (only) that light, once again “if captured separately,” can be altered with the curves-node for dramatic effect: without re-rendering. Tracks produced by BI or by a third-party renderer can be seamlessly joined with something from Cycles, thereby using the relative strengths of every method (don’t forget OpenGL!) in your arsenal.

Yes, there is a reason why songs are created using “multi-track recording,” and why sound boards are (still) so very wide.

Quick Tip, How to Fake a Rim-light! - BlenderNation

ohn Mervin writes: Do you need a rim-light on a character? But can't use a real light? Here's a quick way to fake it! Using the node materials, I discovered a little "cheat" to fake lighting for a particular shot. It's a simple trick, but with a...

@ sundialsvc4 - those are the techniques I’m starting to learn about. I’ve followed one Blender compositing tut, but that was pretty much about adding special effects - mist, lens flare, etc. rather than what I understand compositing to be. My understanding is that it involves render layers and layering them in a final post-processed image. I haven’t found a tut on this yet.

Then there is another aspect of post-processing, in which a single render is made, with multiple passes for AO, DOF, shadows etc., which can be used in a compositor for splitting out layers, deleting, enhancing and recombining. I haven’t seen anything of this in Blender yet, but judging from the mixing modes available in Blender, I am sure this is possible in Blender. Did I see somewhere that Blender can save EXR information?

@Dito - very clever - thanks for the link