This is a little side project, my little son was the inspiration for. He once combined the 2 words banana and Ananas (which is a pineapple in my language) to banananas. I immediately had an image of the fruit below in my mind. After searching the internet, I found out, that we weren’t the first ones to combine these 2 words, but anyhow I thought it was a fun project.

I’ve been using geometry nodes to create the pineapple pattern on a roughly modeled banana shape. For this I used my “Tissue” node group and some noise to make the look a bit more natural. Another geometry nodes graph was used to scatter the leaves and to place the droplets. All materials are procedural. After rendering I used my Soda add-on to perform some light mixing and post-processing in Natron. 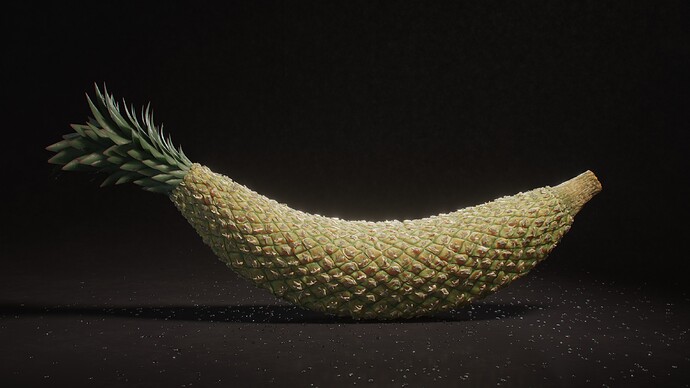 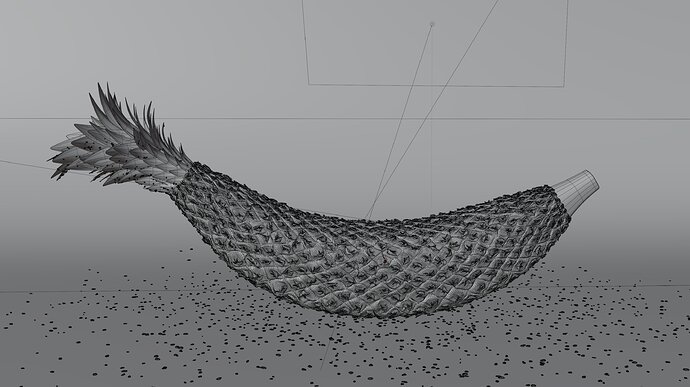 Here’s also the full project, in case someone wants to have a closer look.
banananas.zip (1.7 MB)

I’ve seen your Tissue node but didn’t looked at it yet ! It’s an amazing feature on it’s own, I’m quite curious about how it’s done, but I fear getting my brain hurt trying to figure out !
Same with what’s available on your gitlab repo, I didn’t look at them yet but they’re on my todo

Thanks a lot for sharing these, it’s super cool !

And the Bananas ! Super cool too ! The level of detail is perfect !
Where are you from ? I’m also from an Ananas country !

Thanks for the nice words. Glad you like the image. Wherever you find time to try out my humble node collection, I’d be interested in your opinion.

Where are you from ?

I’m from Germany. I see your from Paris. There was a time, when I was quite often there. But not recently.

Sorry for the late reply !

Well, just scrolling through your gitlab and having a look at the picture I’m already amazed !
Each group look awesome and I’m very curious about trying them and dissect them !
I’ll definitely give you a feedback once I’ll do so, I’m just a bit busy for now so it’s hard to dive into that !

Cool that you’re from Germany ! If you come to Paris feel free to tell me and we’ll catch up !

So would it taste more like a pineapple or more like a banana! Amazing work of art btw, you mixed them together really well!

Excellent ! I love it. Great execution.

Thanks everyone for the kind words. About the taste, I’m not sure, I think you could peel it like a banana and it has an inside like the pineapple. Maybe creating a peeled version couple also be fun…

If you come to Paris feel free to tell me and we’ll catch up !