This is one of my latest character studies which I worked on over the past couple of weeks.

good work Robbert, I think that his hair is to think and er whats the word… big, it comes to far from the head you need to bring it in a bit more.

Thanks, Aidan. With some of the classic portraits of “the Bard of Avon” in mind, where the hair does come out quite a bit on the sides and the back, I did try different/flatter styles but returned to this one since I was really going for a far less tame and reserved/self-contained rendition of that literary figure. I wanted to capture more of his exuberant and expressive and puckish qualities, which none of the existing portraits really allowed for, dull and serious as they mostly are. I curved some of the guides in the back so the longish hair wouldn’t penetrate the collar but curve back/outward a little. I do have another scene in mind that would show this character from another angle, so that separate project would be a good opportunity to try out more hair options, including a wavier one I was experimenting with during this project.

yes these new particles are amazing you can get some really cool results, have you seen my tutorial? you have obviously got the hang of them but you might be able to draw somehting from it anyway

Your human meshes get better with each one Robertt. Good work.

Some crits, the loop coming from the edge of the nostril that forms the indent in the cheek area there, starts a bit too low on the nose. Should start a bit higher, just above the nostril.

The edges of the lips seem a bit sharp to me. Could soften that loop up a bit.

The eyes are modelled very well. Great job there. Eyelids look perfect. The actual eye could use some more specular and hardness though with some more reflection to make them look wetter. They seem to be very dry looking in this render.

Cloth is fantastic. I have been trying to get that look for some time now. Great job there.

oups I forgot ask, may you show a wireframe ? %|

I like it, he has very expressive eyes, a thing you don’t see too often in 3D art IMO.

I agree whit BgDm about the nasal and lip area, other than that I have no complaints or crits.

A second render is coming up.

Aidan: Yes, I checked out your tutorial when the new static particles first came out. Excellent work on that. Thanks for posting it.

BgDM: Thank you very much BgDM. You are right as always concerning the topology here. There was a little problem in that area, which I reconstructed slightly in the next render coming up. Due to the high lamp, dark shadow, and AO sub, the nose still has some strong shadows in that area, but I think the overall look is more natural thanks to your feedback. The cloth was nearly a separate little project in itself. I increased spec/reflectivity in the eyes as well. I also did some more post work in this next render with contrast, saturation, and sharpening.

vlr: Thanks! A wire is coming up.

Hippie: Thanks so much Hippie. It’s always a challenge trying to bring a CG character to life in one still frame like this.

I’ll be posting my update soon.

While I intended the second render from this project to be different in angle, setting, and composition, first I wanted to try some other subtle things differently with this particular angle.

Here is the second image.

A wire is also attached to this post. What you don’t see here are the lamps. There are 13 lamps in this, some negative, some layer only. Main lamp source is shadow buffered. 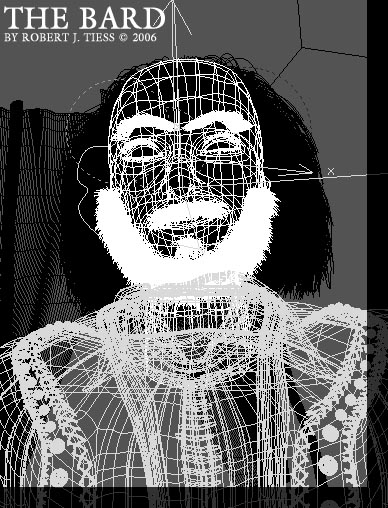 it’s incredible! You don’t need to read the subject to know who it is… awesome job!

–
http://members.cox.net/kicktheball
my barely there web site