I’m pretty in experienced in blender and this is one of my first works. Can anyone give me some tips on how to improve it? Thanks

Well, let me start off by saying this grass rocks! This has potential, I cant believe no one has commented on it.

Ok, now for suggestions. I would angle the camera more at the end of the bat (refer to image 1), and I would generate some DOF, if you dont know how to do it in blender you can fudge it in any photo touch up program (or send it to me if you want, I’d be happy to do it to your liking if you want). I’d also make it a portrait sized shot where you get some sky in, maybe have a baseball near by…? also change to B&W. (see image 2)

Sorry image two looks horrible but I hope that helps! 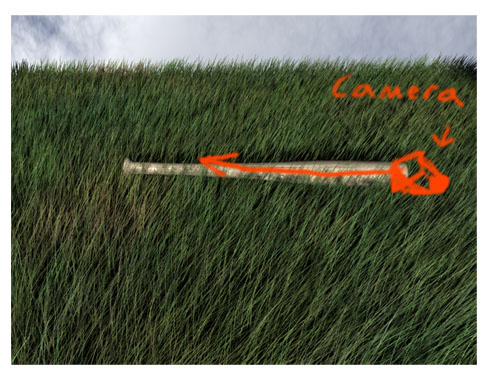 actually i was thinking the grass could be improved.
the bat could possibly be narrowed more down by the handle.not bad otherwise!

Hmm… I’m not sure about the camera angle. It’s not very interesting… (In my opinion.) What Blend suggested would make it better, but I’d do it at a 3/4 angle. (About halfway in between your angle and his suggestion.) Part of what throws me, I guess, is the angle. There’s little feeling of direction. Is it on a hill? How is the camera tilted? Did the grass get watered yesterday? (Ok, last one might not be so important.

This grass is cool. Kinda a painted look.

Blend 1988 is totally right the grass rocks, can u give the settings please?

Yeah, play with different camera angles. That will make this piece really pleasing.

The grass appears to be growing right through the bat in many places. Unfortunately, I can’t offer any suggestions on how to fix this problem as my own experiments with grass suffered the affliction.

You need to add a deflection force fields to your bat and then give the whole thing a probability of 0 for particles to pass through the bat.
You find the deflection settings in the Object tab (F7) under the physics button.

The bat looks as if it is sitting on top of the grass, rather than in it. Maybe show a bit of dirt underneath so you can tell where the ground is.

I agree with having the bat shown at a 3/4 angle, perhaps not quite so steep as that, with the handle pointed toward the camera, otherwise, the scene is too horizontal. Modeling a baseball to sit next to it would really pull off the scene. If you’re particularly daring, you could try a glove, model Home base and get a background of a baseball field (or model one yourself!) This project would be a great way to get into Blender.

isnt that grass same as the sort of thing you can make from the grass tute in the tutes section here?

I am totally agreed with you.