Hi, i got so excited about upcoming 2.48 version, and new softbody implementation, i have been working for 2 full days to make a demo to show capabilities of Blender Game Engine.

So, here is first screenshot, at the moment it is about 6k triangle scene, every material has at least 4 texture maps, some has even 6. I try to keep texture size as small as possible to gain performance, well at the moment it is running at impressive speed (actually keeping up at 60fps as my dispaly supports only 60Hz, and i dont know how to disable VSync in Blender).

The striped cape has Alpha and nonAlpha version, i like with aplha more, but when Zbuffer is enabled, it doesnt cast shadows

Added a noise filter in separate scene. To change noise amount, open noise scene and change Alpha factor in material settings, at the moment it is 0.06
Depth of field: improved performance 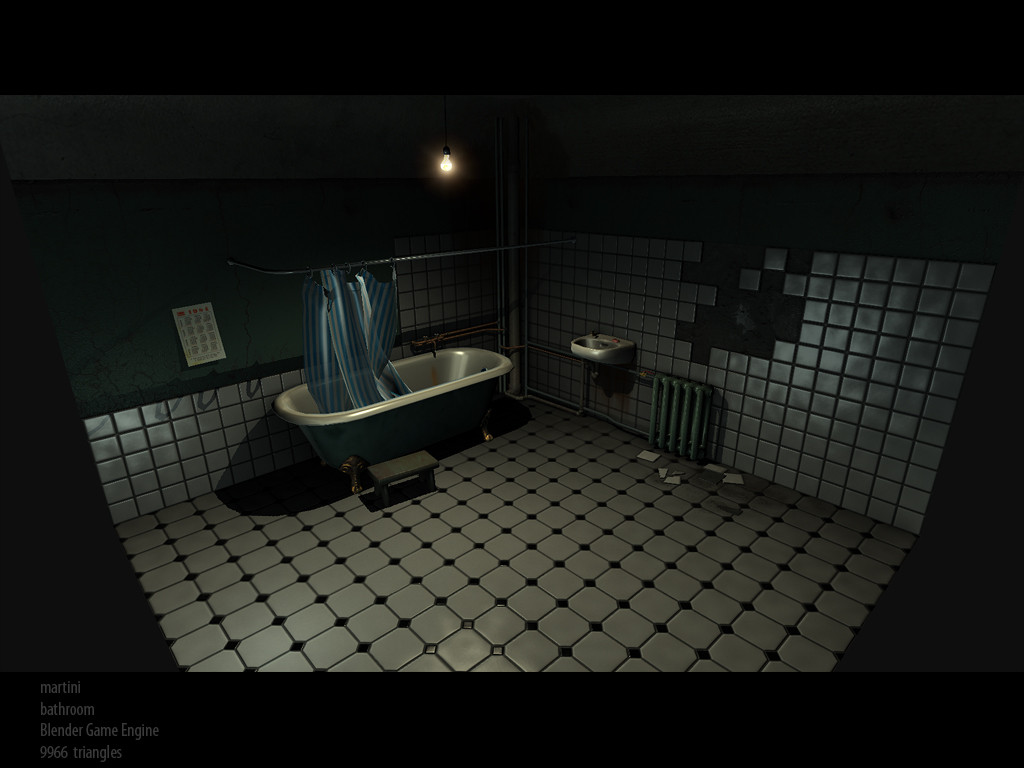 Wow, very impressive! Will you post a blend file? I’d like to see this go on my computer.

Wow, very impressive! Will you post a blend file? I’d like to see this go on my computer.

Thanks, yeah ill post blend file, hopefully, tomorrow. I need to know how it runs on various PCs

Even if that was out of game, it would still be amazing! Very nice indeed!

The shower curtain needs to be a lot longer, and I don’t think they would have it clear with stripes (would defeat the purpose?). But idk, maybe since its just an old bathtub it doesn’t really matter. If it had enough bubbles… looks good besides!

martin they are having a contest for EXACTLY THIS THEME THAT YOU’VE DONE HERE at game-artist.net only the poly limit is 10,000 not 6,000 add more stuff!!

you need to go ahead and make this entry in order to represent the blender game engine.

The prize is 3 Ballistix Pubilshing books. THe deadline is Sunday. Hurry up and go go go go go !! Be sure to plaster Blender Game Engine all over the place. People will fall over on their faces.

As this render you’ve made looks better from a rendering standing point than any of the others I’ve seen so far in their competition.

So enter already will ya!!!?

Why not transparent? Its just to protect the room from spoiled by water in all the places. But in that sense there are to much missing tiles by concept not those fallen apart by time. No regulator on the radiator/heating and just on/off switch? Looks like 1960s style.

Hmmm, I’m thinking the idea of this release is to demonstrate the capabilities of the Blender Game Engine rather than a politically correct bathroom.

It does a great job of showing Blender’s capabilities. Good job man.

What happens there besides a walkthrough movements wise? Or is it just the realtime textures and lighting?

you can turn off Vsync, if you go into your driver control panel and force it OFF. Then you may have to restart your computer after applying the settings. Blender should finally start listening then - so set your game settings to enable all frames and Vsync should be turned off

It looks a bit too plastic in my opinion. Add more details like stains, damage, color variation and bump map details.

It looks good but not good enough in my opinion.

thanks for comments & crits.
kay_Eva, thank you! ill try participating the contest

There will be more rusty stains on floor

and the whole scene without curtain:

heh, i tried turning off VSync, thanks, it worked. Scene runs at ~ 220fps without and ~180fps with 200 polygon softbody curtain.

heh, i tried turning off VSync, thanks, it worked. Scene runs at ~ 220fps without and ~180fps with 200 polygon softbody curtain.

and would u say that’s pretty good performance?

and would u say that’s pretty good performance?

sure :), but i have also a high end workstation, i would also like to know how it runs on other systems…