In this last period i tried to model some furnitures; some of them are in this render: 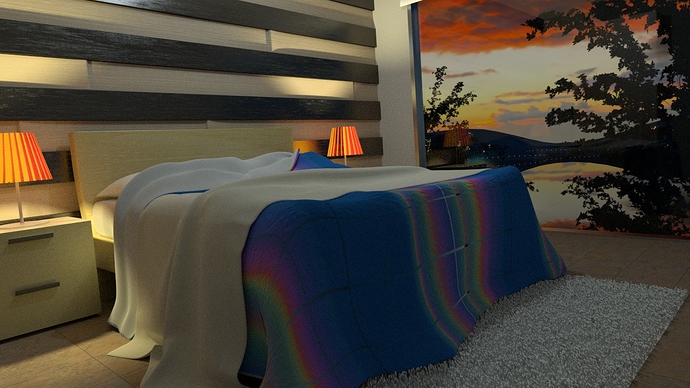 Feel free to critique! There is not yet postprocessing, maybe if you are good at that you can try to edit this image and post here the results…Here are some things i discovered after more than 3 hours rendering at 1000 samples: the texture of the blue blanket (hand modeled, texture in Gimp) its a little stretched, maybe i will add a greyish squared texture at the white blanket (cloth sim) on the top; the glass need more reflection of the inside? How camera composition can be improved? Lighting?

Very fine so far. Only two things I will point out: the background outside looks a bit flat. And the throw rug doesn’t look like shag…it just… I don’t know, can’t put my finger on it, but it looks more like plastic than real fabric.

Other than that, it looks quite good so far. I especially like the wall behind the bed. I’ve always wanted one of those in my house…

I like the wall and casual arrangement of the blankets. To improve the window it needs much more reflection of the interior, as it is darker outside than it is inside the room. Also, detailed trim works wonders at making a window really “pop”.

Thanks for the critics! Here is a render(800 samples) with some corrections 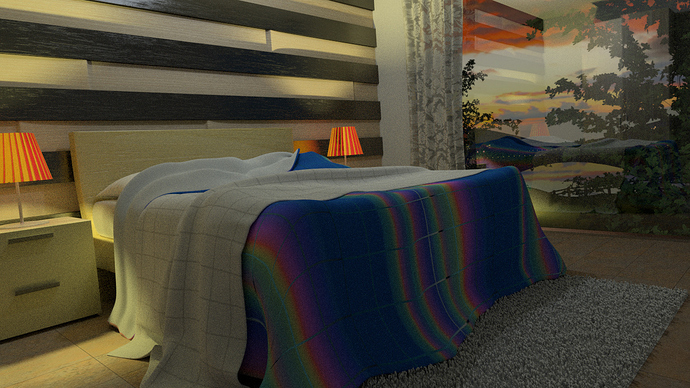 @ Jdaniels and derek : the background it’s all 3d, except the sky, however yes, seems like a flat photo, probably its the lake with very little waves… i tried to increase the bump in the image below, but it’s not enough. I darken the rug color, it’s better now?
@ voodoc : i agree with the window reflection, i increased it, maybe in the ‘final’ render a little more. But i dont get what this means

Also, detailed trim works wonders at making a window really “pop”.
, my english it’s not the best…
Last thing, except the (hopefully) improvements to the outside and lighting, i changed the curtains from ‘top to down’ to ‘normal’ ones. Now the background seems less a picture?

The window looks more like a painting, or at most like a small diorama put behind the glass. Reasons for this are many, I am no expert, but:

@Stan Pancakes: I’m not sure how light works in your world.

@mik1190: With all the attention the landscape is getting…maybe a big bookcase would serve to illustrate the interior better. At least that way the focal point would return to the bed instead of the distant horizon. Anyway, I think it looks better with the reflections. What I meant by adding trim, was to just add a window frame.

The color balance is a little skewed from the yellow lights, however. Here is a version I quickly balanced…it might not be as warm as you were going for, but it might help you tune your light setup. It looks quite good! Can you explain the camera angle though?

Also, you can fix the little chest to the left.

I tried again to fix the background(it’s evening

), now instead of 3d there is a image (from cgtextures.com as well as some other textures) mapped into a plane and especially i improved the framing of the window. About reflections: i increased them a little more, but i even darkened the exterior, uhm…here it is with no postpro: 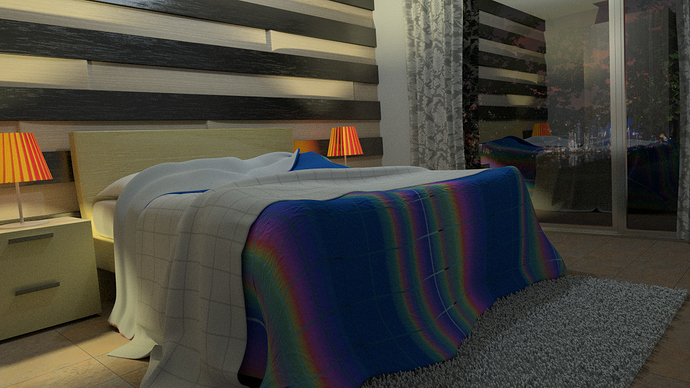 Then i rendered the same scene with morning lighting, this down with no postprocessing, but in another version i have increased the light and added some bloom. 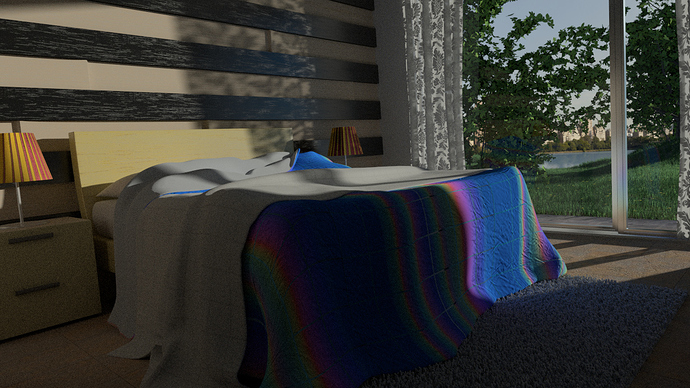 I rendered at 2000 samples, took forever on cpu, more than 6 hour per scene.
This can be useful to someone: becouse it took so long time and afraid of power losses, crashes…i split the render in several parts using shift+b in camera viewport to select render area, then i merget the parts in gimp with ‘lighten only’ layer mode.
Here the question: except noise, these renders can be called finished, at example proposed to a ‘not so esigent’ client, even if i can improve the reflections and the chest?

It looks quite good! Can you explain the camera angle though?

Also, you can fix the little chest to the left.

Thank you!
Here is a screen with (random?) composition guides, keep in mind i am not expert whit them

[ATTACH=CONFIG]199155[/ATTACH]
Probably was better a lower view; you are right about the chest, i spend very little time on it compared to the bed…

The morning scene can be improved. I don’t know how to improve it, but it looks much more unrealistic than the night version. And it looks more like evening than morning.