been away, now back 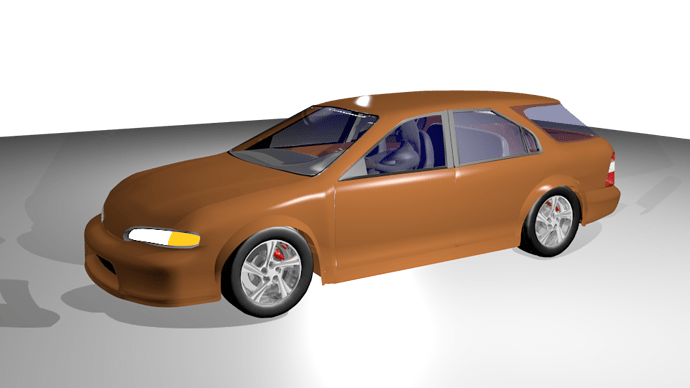 I had been away from working in Blender, but now I have returned. This model is by no means complete, but it is the furthest I have gotten with a car model. It may seem a rather mundane subject, but my idea was, once this was satisfactory, I could begin to modify it. i am rather proud of the rims, taken from a catalog image, about the most complex single mesh I have yet attempted. Current obstacles include keeping the body skin consistently smooth, deleting and redoing edges, while keeping the doors separate. I’d like, down the line, to be able to open and close them. Also, light and shadow not doing what I would like. I tried putting point lights inside the headlights, but it would leak out the back of the mesh, lighting the car interior in an unrealistic way. so for now it’s just the surface emitting, and it is unsatisfying. Meshes don’t always seem to block light properly. Shadows underneath are not consistent.

Having been away from concentration, I have had to relearn some, but as I go, a lot comes back, and I see mistakes I had made in the past that tended towards “painting myself into a corner”. Plus, today I have a much better computer, a Mac, than I had when I first started learning Blender.