I am missing something but not sure, thinking no smoking behind the bottles.

But what do you think & how to make it a bit more realistic texture wise – any tips? 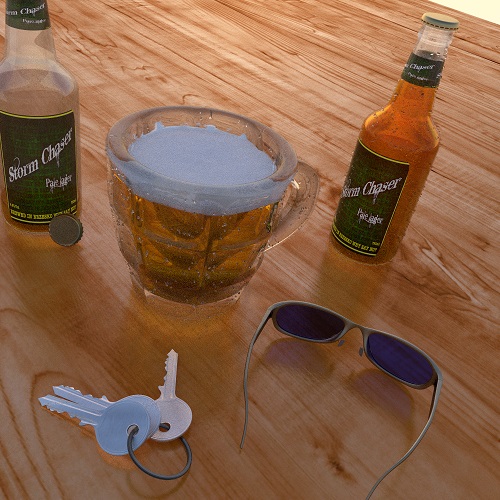 But the keys are too perfect, it looks like they’ve never been used. You could also write something on it, like a brand’s name.

The table looks like it’s made of plastic, is that what you want? If it is, I think you could use something like a noise texture as a bumpmap. If it’s real wood, then, like the keys, I think it shouldn’t look that perfect.

Great work anyway ! I hope it will help you !

The beer mug is very distorted, not sure what effect you were going for. Also, the yellow space in the top right looks like a mistake or just something you left blank. The keys are massive compared to the glasses also, they are like twice the size they should be. Condensation on the bottles looks good.

The left bottle cap looks like its standing up. People usually have a lot more keys on their keyrings. Also, people usually don’t put them on the table like that. The camera angle isn’t very interesting, and thus the composition needs a lot of work. It looks like we are seeing from a first person perspective the guy drinking beer. If this is true, the placement of things is unrealistic. His sunglasses are in the way, and his hand will hit them if he tries to pick up the mug. He also risks dripping his beer on his sunglasses, and keys. He would not have them in those places. I would scrap the first person perspective, and make the camera more level, and show the end of the table with a little bit of the room inside. (try to have the horizon vanishing point in the frame) You can have the background out of focus, or dim, so don’t worry too much about having to model a whole scene if you don’t want to. (It can even face a wall if you do it right. Or you can make this on the bar. A full bar with bottles, and taps slightly out of focus (not too much) behind this one beer could look really cool.

Also, what are you trying to say with this piece? The title so far is simply “beer” If your intention is just showing beer. Try only having 1 beer. Make it the focal point, and really work on it. Or are you trying to tell a story? Has this guy had a long day? He ordered 2 beers at once. Why? (Most sit down places will only let you order 1 drink at a time for yourself.

Last thing, and this is just personal opinion, but I would make the bottles brown. Yeah there are some beer bottles that are clear, but its better when they are dark to keep the sun out. We don’t want skunky beer!

I agree with all points mentioned above.

Now to add some of my own suggestions.

In the end you are the creator of this image and we are just here to help you advance as an artist.