Hello there! new user here, and kind of new user to Blender. I’ve been playing around with it alot the last four-five weeks, but I’m not exactly smart so it takes me time to get the hang of things

Anyway, this is my third attempt at posting this WIP. I missed the the announcement that said new users can’t post URL’s (again, I’m not very smart!) and used Imageshack to host my WIP picture. Then I used attachment but that didn’t work either, so here goes maybe third time is the charm

Ok, as you probably judged by the title I’m trying to model Beetlejuice from the movie by the same name. It’s one of a couple of models I’m working on aimed towards rapid prototyping which is something that just blows me away! I could really use some good crit on likeness as I’ve had a hard time finding good shots of Beetlejuice on the web, and have thus resorted mainly to looking at Michael Keaton shots from other movies that I’ve found. He used heavy makeup in Beetlejuice and I think I need to put more weight onto the face (which is all I’ve really worked on as of yet). Again, crits are very appreciated, finally I’d just want to say that it’s incredible that such a full solution package like Blender is free. I can build basemesh, sculpt, uv-map, retopologize (but not project detail unless I’m mistaken?), paint textures and render in one and the same package… 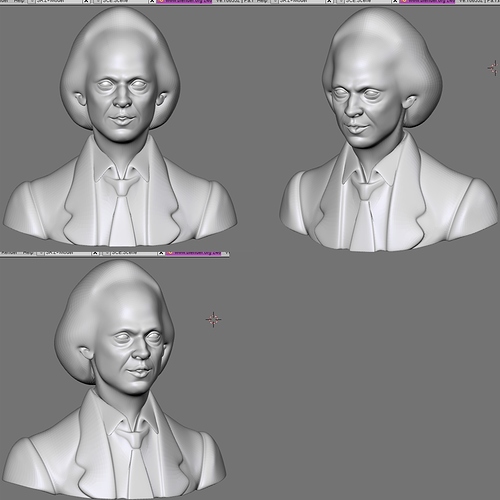 Great modeling so far, no crits from me. I will keep an eye on this thread.

Wow, you seem to have grasped Blender’s unique control scheme quite well. What do you mean by project detail? I would think there are alot of ways you could do that, through bumpmaps, multires meshes, and various texture and material settings. As for the model, it looks very impressive, put a set smooth on his hair as long as it doesn’t leave a big line where the smooth meets the solid. Although I would think you could set smooth the entire head to no detriment. Also, if you wanted some edges to not smooth as much as the rest in the subsurf (i.e: for the clothes), shift+e adjusts the amount the selected edge/face is affected by the subsurf.

Good work! I’ll keep an eye on this.

Impressive work! 4 weeks and this good model, my god…you don’t seem like a slow learner to me

What sort of approach do you use to model? The only way I can model right now is extruding from a plane or cube, then pull the vertecies around and loop-cut…it takes a lot of time, like the suit I have no idea how ot do that, let alone creases around the eyes…

The sculpt is very nice, with recognizable features. He was a bit younger when he did beetlejuice, so the cheeks would be smoother and more “chipmunky” (is this what you meant by more weight?). I’m not sure if he used false teeth in that movie, but I suppose you are planning teeth, as separate sculpt?

There are two types of retopo in blender, one is where you “drop” any mesh that you have onto the other object’s surface. This is as accurate as it gets, but you then need to merge together all the pieces dropped from different directions, which takes time.

Hey if your still stuck for some images I’ve found a few on IMDB.
http://www.imdb.com/title/tt0094721/mediaindex although not that big in size.

Here has a decent sized image of the movie poster which is quite clear compared to the actual movie images. 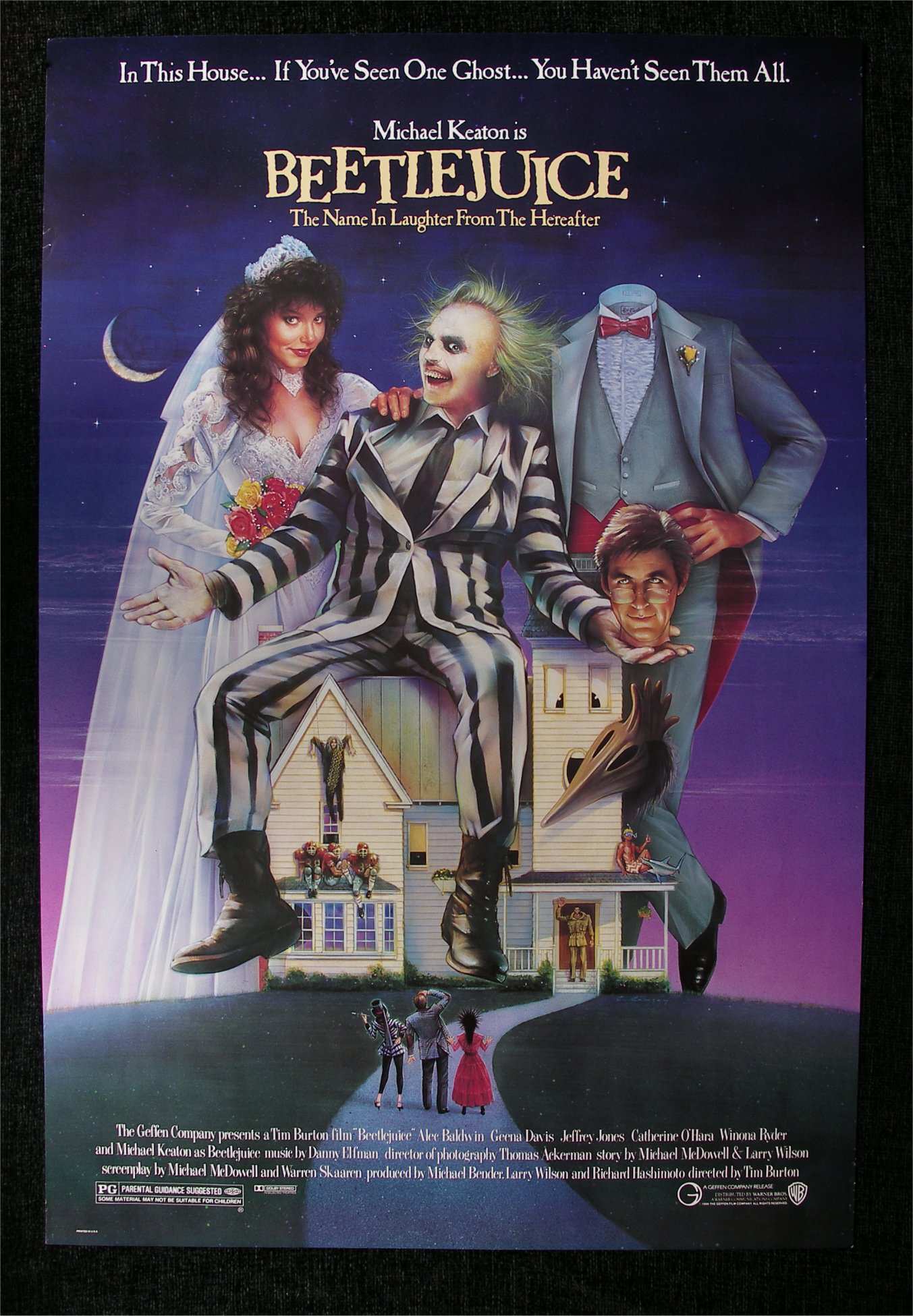 Looking really good, i’d say the hair line needs to be slightly more refined but other than that looks great!

Thanks all for the replies!

Brookesy: Well, the general control scheme hasn’t been a big hurdle for me, but sofar I’ve pretty much only used ‘edit’ and ‘sculpt’ mode. With projection I meant projecting the detail from one mesh to another. I’ve tried the retopology mode and it seems easy to work with, and it would be great if I could retopologize the current mesh and project the detail from that mesh onto a new, better distributed mesh (in this case I think I should have added more polygons in the hair area). I’m not sure I follow what you mean with setting smooth, are you talking about subdividing or? Again, I’m not the sharpest tool in the shed

X_Shade: Thanks! well I’ve modelled quite a bit in other packages so I’m not new to the concept of modeling, only Blender. As for approach, it’s a basemesh and then sculpting. Previously I made basemeshes in Wings3d which is a box-modeling application, in Blender I’ve noticed that I tend to do more poly-by-poly modeling, also it’s wonderful to be able to do realtime editing of the topology while in subsurf mode which is something Wings3d couldn’t (likely due to the performance constraints of running in interpreted Erlang).

EIAkimein: Thanks! Yeah that’s pretty much what I was thinking with the cheeks, thanks for the input. Teeth will be separate and from what I’ve gathered from the screenshots I’ve found they must be fakes as they stand out (Buck teeth?). Hopefully when I add them they will add greatly to the overall likeness.

Odeas: Thanks for the links, I went to imdb myself initially, but as you say the images are very small and it’s hard to deduce any real detail. Thanks for the large movie poster image, that’s the best I’ve yet come across (thumbs up!).

My main problems right now is how to do the hair convincingly, I used ‘Grab’ to pull out strands and it looked ok only it puts a strain on the available geometry (of which I think I didn’t add enough) which means I will later have a hard time adding detail to the hair. If I recall correctly there’s a Google Summer of Code project which will allow you to edit topology in Multi-Resolution meshes, that will be Sweet! I wonder how it will retain existing detail though, like if you edit the lower mesh, will the detail from higher subdivisions be retained aswell as they can be using the new topology? Ahwell, time will tell.

Again, thanks for the comments and crits!

No problem. Google did the hard work

Why not use the Hair particles system to generate the hair especially with the new comb tools etc.

I’ve not had a great chance to try it out but to me the hair he has in that poster should be quite achievable?

With projection I meant projecting the detail from one mesh to another. I’ve tried the retopology mode and it seems easy to work with, and it would be great if I could retopologize the current mesh and project the detail from that mesh onto a new, better distributed mesh (in this case I think I should have added more polygons in the hair area).

It sounds as if you want to map the normals, though I could be mistaken. Seeing as you’ve used 3d programs before I’m assuming you know what a normal map is. If that’s what you’re refering to by “projecting the detail”, then just check the wiki for “normal mapping”.

Odeas: This model is aimed at rapid prototyping and as such I think it’s akin to making a solid statue in polygons. As far as I know the hair simulation doesn’t generate any actual geometry, right?

WannaBCreative: Thanks for the suggestion, what I want is to be able to transfer the highres detail onto another topology and then be able to continue working on the model with the new topology, and while I can use normal maps to transfer detail to another mesh/topology it doesn’t result in an editable mesh afaik.

There is a project called gSculpt, which is very similar to Wings3d. It can display the subdivision surface better than wings3d. It is still alpha last I checked, but it works, and the features are very close to wings3d.

The new jahka hair/fur thing in blender is very cool, but it is very closely coupled to the blender internal renderer (e.g. level-of-detail based on render settings). Would be great to bake it to something, textures or polygons, preferably animatable. I think “dupli” baking for it exists, but that is just one piece of geometry copied over and over.

No update on Beetlejuice since I’ve been working hard on another model (will post it soon). The reason I’m posting is that I was wondering what lens setting you guys use when modeling in perspective mode? Currently I’m using 90.00 which looks ok to me, but I’m pretty much lost with things like this.

Anyway, since I bumped my own thread I figured I’d atleast post something, so here’s an ugly creature I sculpted: 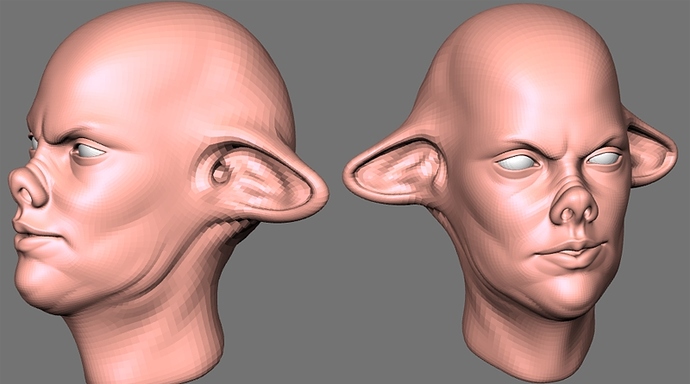 Were these character vertex modeled or sculpted, like the above pig. Was Blender’s Sculpt Mode used?

Apparently new to Blender but not to 3D. 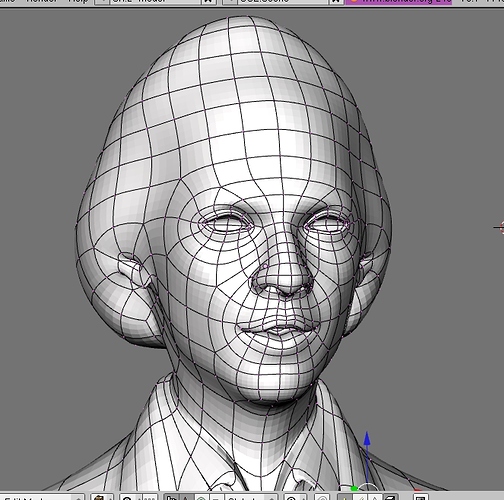 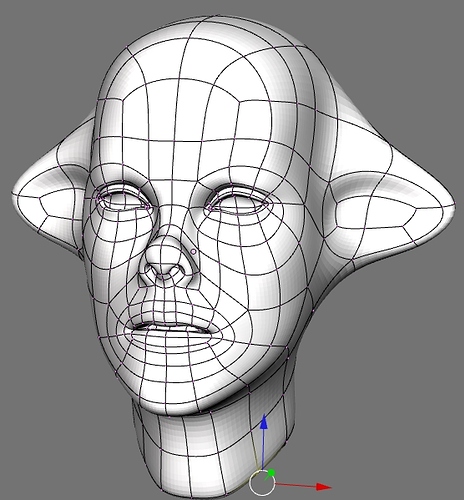 The reason I’m posting is that I was wondering what lens setting you guys use when modeling in perspective mode? Currently I’m using 90.00 which looks ok to me, but I’m pretty much lost with things like this.

I have seen photography guides recommending the use of 85mm lens for portrait work. But this is just a matter of opinion really. Telephoto is a safe choice for subjects with larger features (like the nose).

ElAkimein: thanks for the input!

I hope you guys all are having a great summer with fine weather, only downside is that one spends very little time infront of the computer! I’ve done very little work on Beetlejuice since last update and I’m not really sure if I’m getting closer or further away in terms of likeness, so any crits are much appreciated. Also, here’s another model I’m working on, alot left to do but I feel the face is getting there so hopefully some of you will find it recognizable.

Have a great summer! 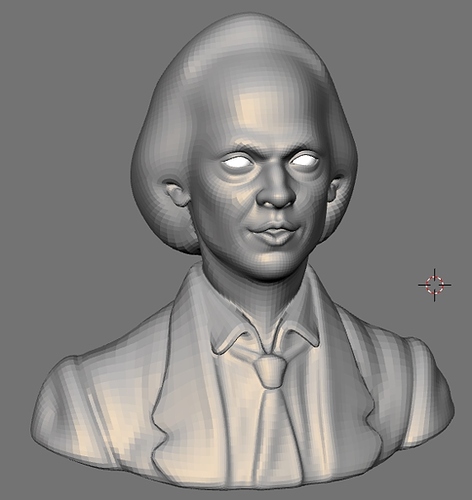 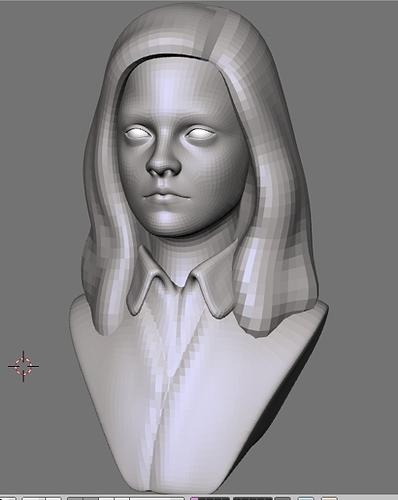 Wow thats a great likeness of her

recognised it straight away which must be a good sign!
Very cool!

Wow thats a great likeness of her

recognised it straight away which must be a good sign!
Very cool!

Either that or your really good at being vague lol. J/K. Hopefully we’re both right about who it is, but in order to find out someone’s going to have to post a name. As I don’t know how to spell her name I’m going to say its the chick from harry potter with the name that sounds like harmony? lol. I don’t know. My wife watches that crap.

Thanks guys, yes it’s hermione, hermoine or something. Unlike Beetlejuice I can’t complain about lack of reference images with this one, I made a search for ‘emma watson’ and there was frikkin billions, guess the Harry Potter franchise is doing well… Anyway the hardest parts with her sofar has been the mouth for some reason and the hair. I thought the wild hair would be fun to sculpt but I’m ending up tearing my own

The hair you see on the shot is just the basemesh prior to sculpting, I’m currently at my 3rd attempt with sculpting the hair and will post it when/if it starts getting anywhere. This is an area in which I would love to have ZBrush’s lazymouse in Blender.

Haha oops. My bad, I thought it was Christina Ricci who for some reason I thought was the girl in Beetlejuice, but she’s not she’s from The Adam’s Family it turns out