This is my first quasi-complete arch-viz project and is two solid weekends of work. This rendering is simply A.O. with the edge layer turned on.

Over the next week or two I intend on taking the model to Luxrender; after I’ve brought in the chandeliers, sconces and their associated photometric data. Stay tuned. 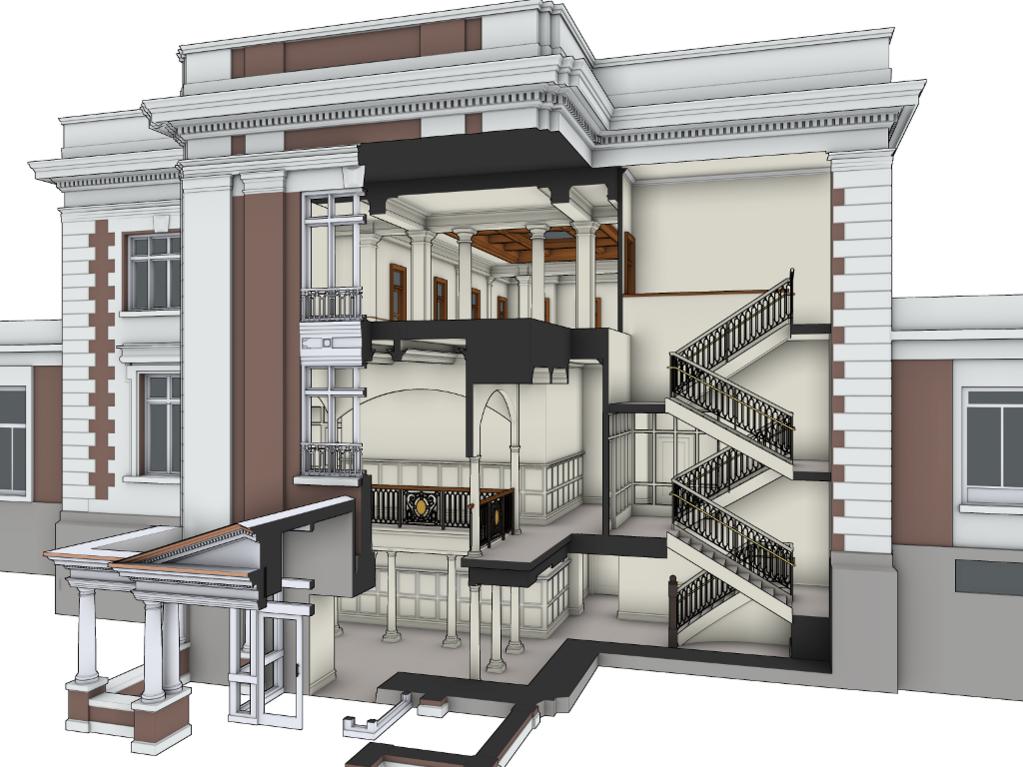 this is phenomenal… are you sure your a beginner?

coz this is a proffesional piece… i like really your render

Whoa that was seriously smooth! I’m waiting in suspense for you next update:p . Did you use any blueprints or is it simply from your imagination?

Thank you for the kind words. I am a CAD operator in a very small architecture and engineering firm. I’m definitely a beginner when it comes to 3d; this is the first modeling project of mine that hasn’t been a dud or a false start.

The model was made from a set of construction documents I was involved with producing. Start-to-finish it was a two year project, so being incredibly familiar with the building and the CAD files really helped with the modeling.There are definitely transferable skills between CAD-usageand Blender modeling. The most important skill that carries over is staying organized in the face of increasing complexity.

It’s a really nice model.
For the missing quarter, did you model it ? Or did you use the new boolean operators?

I totally didn’t think of using the boolean modifiers, that may have been more efficient. All of the cut-away geometry is off on a hidden layer, I want the hidden geometry to cast shadows in the lit version of the model. So you’d see the light filtering through the windows that are cut-away, and what-not. Right now, I am trying to figure out if the Luxrender materials system has an equivalent to Blender’s “Only Cast” option.

I have added quite a bit of detail. I’m still intent on using a rendering engine with Global Illumination, though it is hard to lose the “haunted house look” with this particular image. I’ve chosen Yafaray because it has an equivalent to Blender’s “Only Cast” option, in order to shield the interior from the sky dome.

The first image is a Yafaray test.
The second image shows how I used / snapped-to the imported CAD data.
And the third image is the updated cut-away illustration. 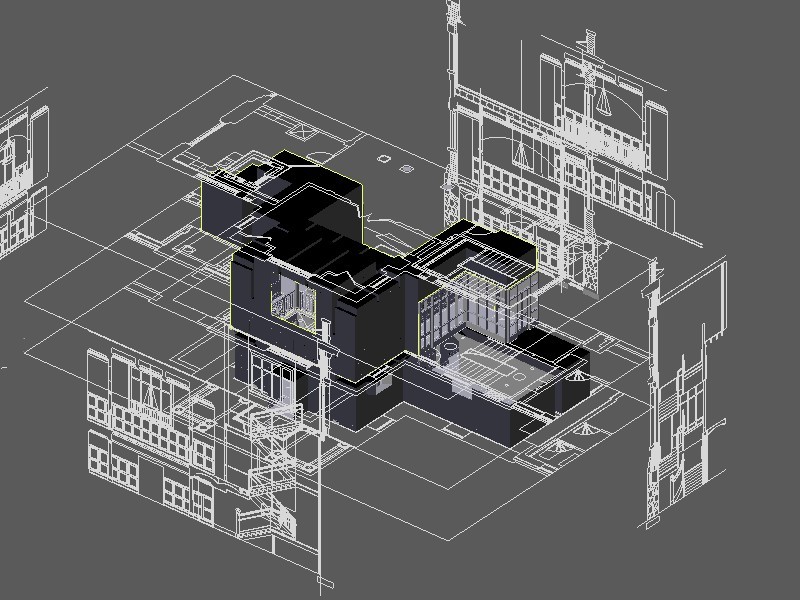 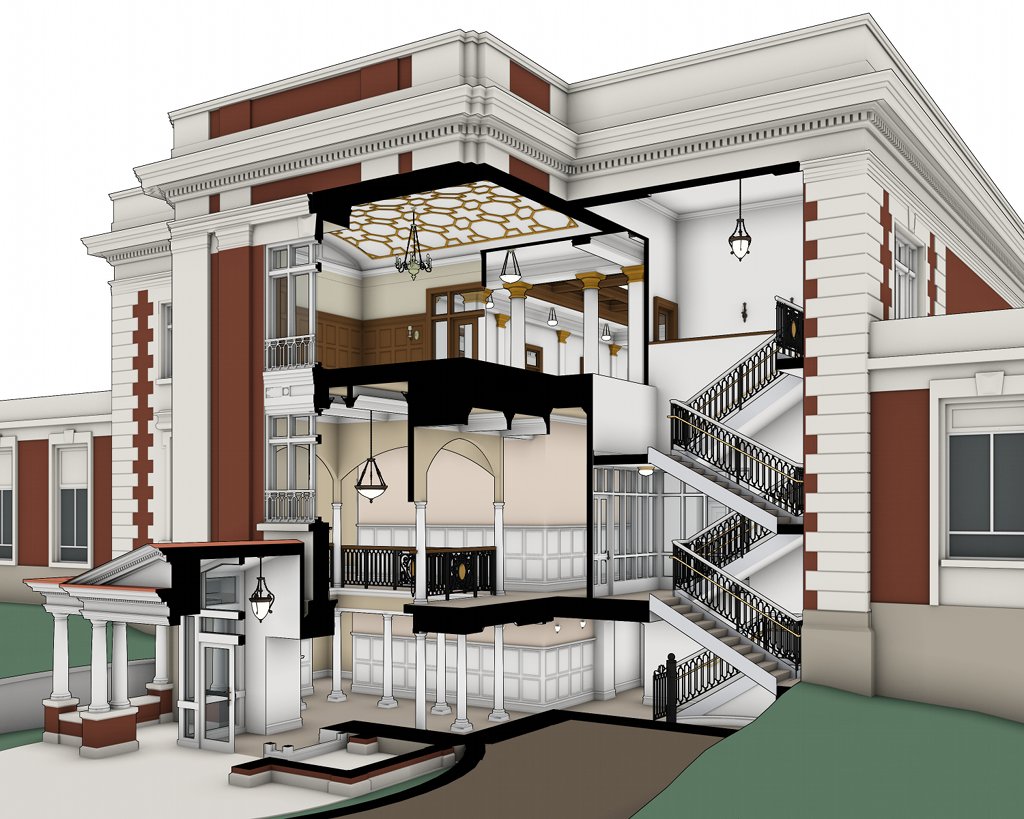 This is really awesome. Your experience really shows even if you are a Blender noob.

I remember reading that Blender has a steep learning curve, but that once you climb it the interface doesn’t get in your way. Both parts were true for me. I was slow to pick up some of the finer points of subdivision modeling, especially. But, when things are going well, I feel like I am reaching into the interface with my hands and manipulating the objects directly. I couldn’t say this for any other program that I’ve used.

I’m back at it. This new version was rendered with Yafaray and composited in the GIMP. The interior light groups used photon mapping, and the exterior pass used pathtracing. These were rendered at a very high resolution (3600x2700px) because the image was included on a presentation board on Wednesday, but there are a few things I would like to change before I shelve the project: 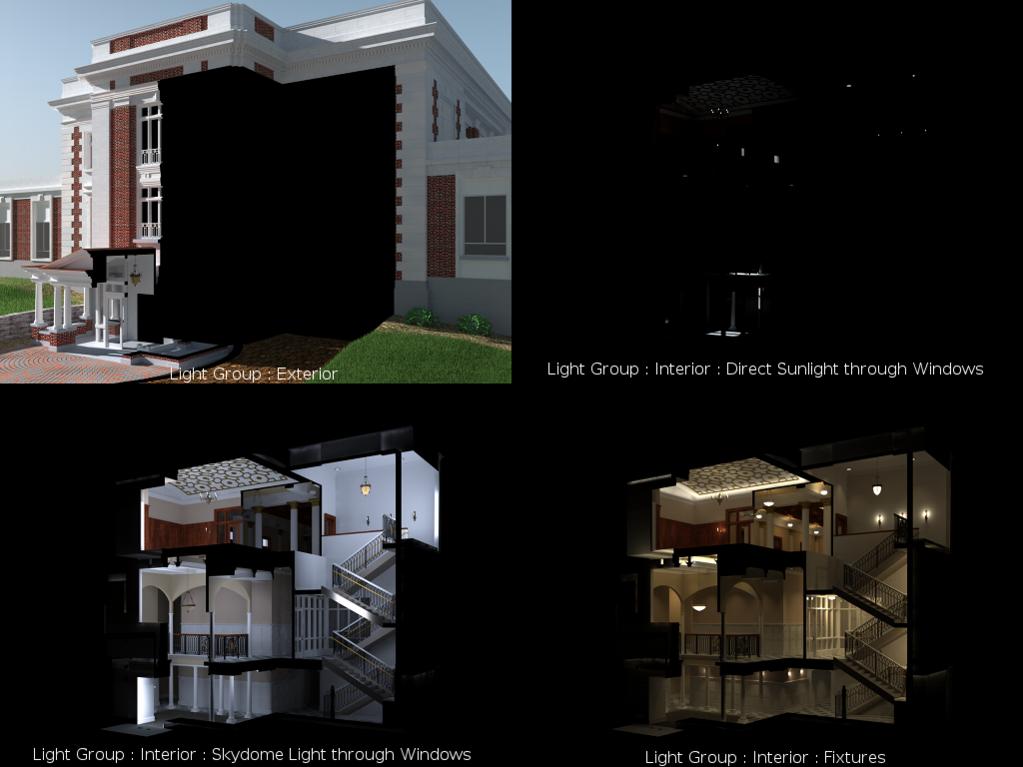 great work there. the final image youve acheived makes me a bit envious. i haven’t cracked interior lighting yet - only outside lights coming in the interior… the cutaway must have been very exciting to show off at your presentation… i can’t imagine the boss’s reaction when you say that project has only cost you time… no software outlays etc… brilliant results…

Oh, there wasn’t a presentation, as such, the board was for an award submission. So we just had it printed, then dropped it off. I didn’t look too closely at the print, either. Because I knew that if some of the noise in the image was apparent, or some colors shifted, it was too late to change it.

I think the surrealism of the cut-away and the perspectival distortion got me out of having to be too adept at materials and lighting, my weakest points. We were fortunate in having a lighting designer on this project, so I had a schedule with all of the lumens and color temperatures of the lights.

a lighting schedule? that sounds very interesting… can you post some details of what you had and how it was used? like how you convert a 10 small ceiling spots into blender lights/units? i haven’t seen any info for this kind of procedure…

The lighting schedules were detailed. They filled a 24"x36" sheet. I used the information on them in a very basic way. The information I used was: the amount of lumens given off by each lamp, how many bulbs there were in each lamp, and the color temperature of each light.

I didn’t know how lumens converted into Yafaray power units. I decided that turning the lights up and down proportionally to one another was the best way to proceed. The image attachment shows the small spreadsheet I set up. The columns labeled, First, Second & Third Calc. are in Yafaray lighting units, and were arrived at by dividing the lumens by a conversion factor, shown on the bottom. I tried about a half-dozen settings and arrived at the blue column shown.

I used a handy script by mikejedw to convert from the kelvin values to a RGB color. (link.)

For the down lights I used spots. Product data sheets for lamps often show an IES diagram, which shows the direction and intensity of the light emitted. I used this to guess the “SpotSi” and “SpotBl” parameters.

ed.: The last column on the spreadsheet is incorrectly named, it is the Yafaray power of each bulb, not the lumens.

ah cool. thats basically the sort of info i was after… not your reams of data for everything - concepts are more useful. thanks… your idea of the conversion factor is quite tidy… that could have been rather messy… having all the numbers close to single digits means they are suddenly meaningful…