I followed a tutorial I found online, and I found out how to make a wine glass. I have the wine glass down, and it looks great by my standards. But…

I’m brand new to blender, so try to keep from using big-fancy-blenderific words, if you can. Thanks, so much!

To fly around in 3d you do not need python. Shift-F starts camera fly mode.

If you want to learn the game engine, here is a starting point:
http://www.blender.org/education-help/tutorials/game-engine/

Hi Reece, welcome to Blender! Your wine glass looks pretty nice, however after looking at your scene here are a few things you could do to make the render look nice.

First of all, I’d get rid of the green background, If you go into your world settings and change the horizon to be a gray, black, or something more neutral.

Second, in order for your glass texture to wind up looking like glass when rendered you’ll have to do a couple things. First, currently the glass in your wine glass has no depth to it which makes getting the glass look out of it really tough. There are a couple ways to do this, easiest would probably be to add a solidify modifier before your subsurf modifier and then increase the thickness setting on the solidify modifier. I used a thickness of .09 but it’s really up to you. The next thing you need is to add something for the light to refract. I just added a flat plane as the floor in the scene and that was enough to make it look nice. The last thing I did was enable transparent shadows on the box that the glass was sitting on.

One other note, your scene is currently laying on it’s side currently. (which really doesn’t affect anything for rendering, it just makes it a little awkward to work in.

As for the WASD motion, just press Shift+F, however for design purposes this really isn’t hugely useful. It’s very helpful to get used to using the number pad shortcuts as well as the pan zoom and rotate with the mouse. If you want to use WASD control inside the game engine it doesn’t require python either. You just have to set up your logic blocks to handle it. That’s a whole different tutorial though 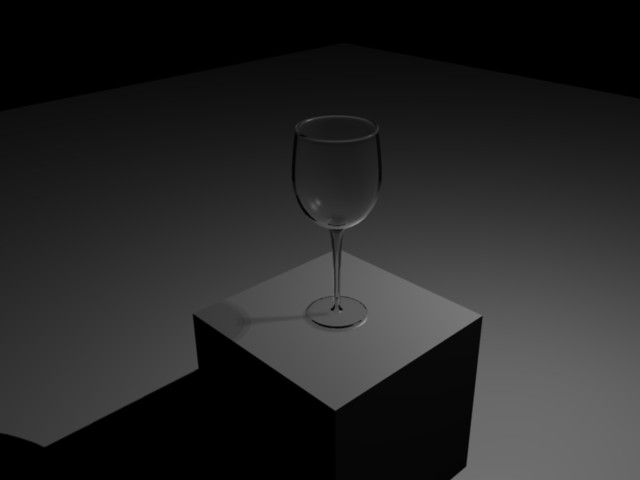 Hi Reece, so Shift+F only works in the design mode of blender. Once you have rendered your scene it’s just an image so you are unable to move around. In the game engine you would need to add logic blocks on the camera to handle key presses and then have those trigger a motion actuator. I think that’s probably more advanced than you should be dealing with at this point thought. This pdf has some good info on some basics of blender, it might be helpful to read through it.http://www.statikonline.com/Blender/Blender_Basics-Part1.pdf

As for the camera angle, there is a camera object in your scene and by moving that around it changes what is rendered to be whatever the camera is pointing at. In actuality your camera is facing the right direction in the scene, your glass is just sitting on the side of the cube.

Finally, the solidify modifier… Yeah sorry my bad that was implemented in blender 2.5 so if you are using 2.49 it wont be there. The other way of doing it would be to select the top rim of the glass, then extrude that, scale it down a little and continue to extrude out the inside of the glass. Or you could just remake the glass giving the bowl portion of the glass some thickness before using the spin tool.

I know this all seems a little complex at first but once you get the hang of it it becomes pretty easy to work with. I’d also consider trying out blender 2.5. It’s still and alpha version so there is a larger potential for crashes and bugs, however the way things are laid out is much easier to grasp for new users.

Well, this is what I got. Anything else I’m missing?

(also, I really appreciate all the help!!) 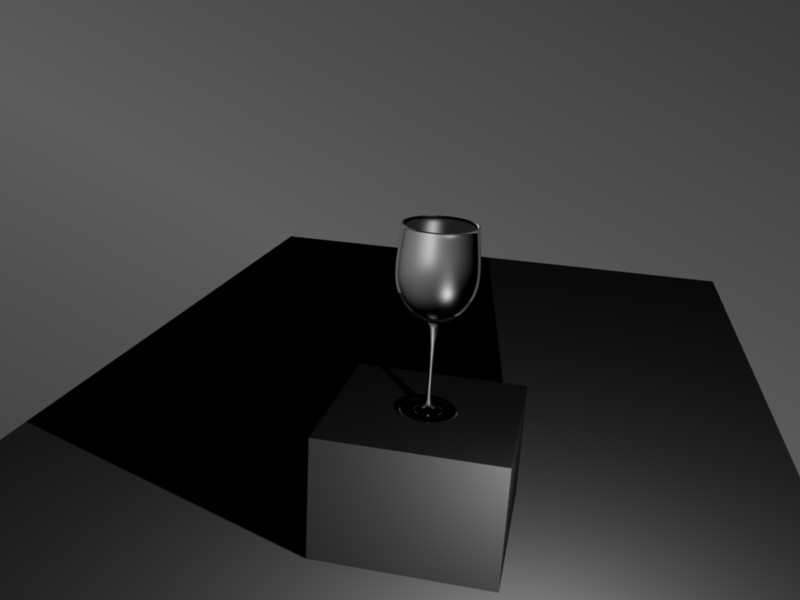 Much nicer! I look forward to seeing the rest of your scene

Would you recommend I continue on with the general feel, and try modeling a full room, including furniture and other accessories around it?
Or should I try a completely new scene?

I think you should improve this one, lighting still needs work.
And yeah, maybe add a table…
And the scene is too dark, brighten it up a bit, and make it softer, fells sharp, i dunno how else to explain,

To tell you the truth most of this kind of stuff(lighting, texturing, coloring) is experimentation, but this tutorial, which might not be applicable to this scene can help get you started. (http://vimeo.com/7171194)
I think the softness will be achieved when you have more lights.
Wooden Table is pretty simple, a rectangle on top and four rectangles for legs, for more complex, just add some more rectangles.
Alternatively you can make a glass coffie table, like the ones in the living room. for that you can add a cylinder, scale it on the z, then scale it on the x or y to give it the oval shape, then add a four more cylinders for legs. Then for decoration, you can add an oval shaped ring below the glass oval top, and connect it to the legs. I mean use your imagination!