I am wondering if there is a Beron tiles plugin or something similar for Blender cycles and eevee.

If no, how best can this technique be implemenmted in Blender?

I saw this recently, which is interesting: https://medium.com/embarkstudios/texture-synthesis-and-remixing-from-a-single-example-faf5f4e8a5b8

I didn’t have time to watch the whole video. Is it just about randomly tiling something? If so you can do this with the following setup: Thanks a lot for the help, mate.
What parameter of the nodes can I tweak to randomise the texture?

Someone at polycount was also able to find a way to do it:
link

Thanks for the link. Interesting to see how others do that.

The randomness is generated by the color output of the brick texture. It generates a random value for each brick somewhere between color1 and color2.
So you can either change color 1 and color 2 but what would be easier to control is putting a color ramp in between the brick texture and the map range. then you can change the randomness with the slider and even use different interpolations and stuff like that.

Thank you very much! That looks like a great solution to random tiling. I tried but haven’t come up with a good solution yet, so thanks again for sharing and your explanation.

Thanks a lot mate.

Note that this does not work with overlapping tiles like the guy in the second video in this thread shows at around 1:20.

I like this Brick Texture method more than the Noise Texture method.
But since the brick texture interpolates between two colors --instead of the individual color channels-- I would use 2 brick nodes (one for U, one for V), to have it going random on both axes independently (and one of the axis offset by one or more whole units). It should allow for more randomness.

The brick texture is also infinite, so another way to add a random control is by offsetting the original UVs that plug into the brick textures, like so:

The Converter→Map Range node seems to be from the Blender 2.8x series. If you’re on Blender 2.79 you’ll have to replace it with something like that stepify group.

Wonderful work, mate. Thanks for posting. I am wondering if this technique is possible for rectangular cells like 4x2 atlas image?

Hi. Without testing it, I think duplicating the CELLS node so you have two, and plugging one to the top Brick Texture and Map Range nodes and the other to the bottom nodes, should work. You would change the cells horizontally and vertically in separate ways, for 4 horizontal, 2 vertical.

@RNavega Thanks a ton, mate.

Is this possible in a material in Blender: 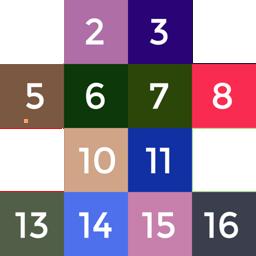 Can you use the brick texture node to scale the rows and column and they overlap like this:

I am not sure about overlap, but procedural UV editing (for things like randomization) can simply be done with the geometry nodes instead of with shaders (if you don’t need per-pixel manipulation). The advantage is that previewing it in the viewport is much easier and you can utilize that node type’s unique feature set.

Thanks for the suggestion Ace,

but I am looking at manpulation of the texture pixels not geometry. Hoping it would be possible to scale and overlap the pixels and blend them as they overlap using a max or add and then randomizing them before or after scaling.

I simply looked at your screen .gif which clearly showed individual squares. I thought you wanted each square to have a number picked out at random.

Now for per-pixel UV editing, the shader nodes can do this (as long as the offset texture does not have gradients as that will produce artifacts at the borders). You can use the brick texture as the randomizer (with no softness and no mortar).

I would appreciate it if anyone can pls post the node setup if it is possible.

@RNavega Do you think this is possible in Blender?

@melvi I’m having trouble visualizing the end result (what you’re going to use this setup for).
I mean, I understand the GIF, but what kind of texture is going to be in those squares? Are they tiles on a bathroom floor? If you have an image that’d be helpful.

Also, the way the squares overlap seems to be random, is it supposed to be like that?

This is how the textures in the squares overlarp. They blend together with a max or add blending . You can put different textures in each square like in the video in the first post and then randomize their position.

I am wondering if the textures in each square that makes up the texture can be split based on the position of the brick texture and scaled to either be smaller or overlap.