3D Coat was the original pioneer of an auto re topology system of course. And the hand re topology tool set was and is great too and a pleasure to use. It was also the original pioneer of free form voxel sculpting and modelling where you start with a ball of clay and simply merge stuff up together from different blocks and shapes. I still remember the first promotional video I saw and how fresh and new it all felt. The one with the lizard on the rock. From voxel sculpt to hand retopo to texture painting.

Absolutely. Autopo was indeed the first auto-retopology tool, before ZBrush introduced QRemesher, the predecessor to ZRemesher. I also remember being intrigued by the first 3D-Coat demonstrations. Back then I was still a polygon subdivision modeler in 3ds Max, and it took several more years before I actively entered the world of digital sculpting. Since I did that, I couldn’t imagine modeling without sculpting anymore.

I also own 3D-Coat, next to ZBrush, and have used 3D-Coat intensively for a while, but in the end I preferred the feel of ZBrush brushing. I do love a lot of 3D-Coat tools, such as the many stroke types and the great spline tools.

At the time of the lizard demo video back when version 3 first appeared I think, there was nothing else quite like it.

I also own 3D-Coat, next to ZBrush,

Likewise. I’ve worked between them for several years now and both have been important. I have been very impressed so far by what I have tried in 3D Coat 2021 especially the speed ups and streamlining going on in the paint room. I still need to dive in further and try out more of it though and also the point update feature.

But in older versions there was many crashes using it, density paint and lines seemed sometimes to have almost no influence sometimes, and it was unable to preserve edges like in latest version ( like how i demonstrated here on the version before 2021.08).
Perhaps one reason it was not more popular.

With such big improvment on latest version, 3D coat will have to do good showcase, not let people ignore they have that amazing auto retopo tool working extremely well.

Woah, I had heard about this add-on, but only just checked it out, and the interoperability with Blender makes 3D-Coat a lot more interesting.

Hi! I have been updating the applink code to work in blender 2.8. Here is a short video. If you want to beta test this let me know about it. [Blender Applink Pt.4 Export Options - Per Pixel Painting (Update)] [3D-Coat/Blender Applink 2020]

The applink for Blender is really good now.
I wrote a little thing on how to get the 3DCoat applink up and running. It had me confused for a bit. Hope it helps anyone confused like I was.

Steps to get 3DCoat 2021 Blender Applink working Other Software

I had to figure this out so here it is to help others. Go into Blender > Edit Preferences > Add ons > search for “3D-coat”. the dash is vital. enable it. Maybe restart Blender if 3Dcoat tab doesn’t pop up. The plugin is packaged with Blender so it should already be in the list. Nothing to download. If not there maybe update to latest Blender. In Bender go to Properties Panel > Scene > 3D Coat Applink Settings needs to be set to the “Documents\AppLinks\3D-Coat\Exchange” folder. This is v…

Some new asset work in 3D coat.
I’m a bit disappointed by Autopo, while result with 10 000 poly would be good enought for rough geometry reduction that would not need best topology flow.

Perhaps the mesh topology is becoming too complex and not enough convex. 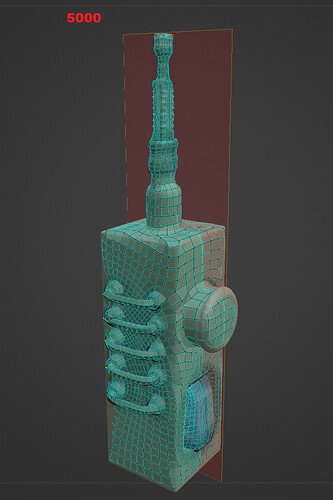 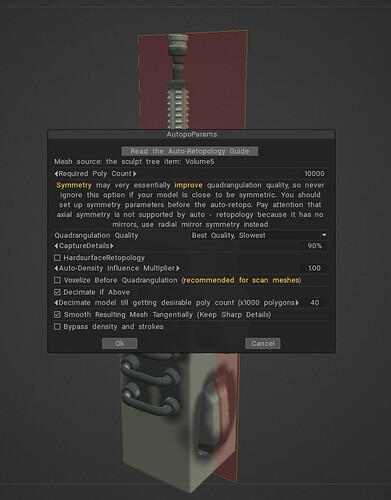 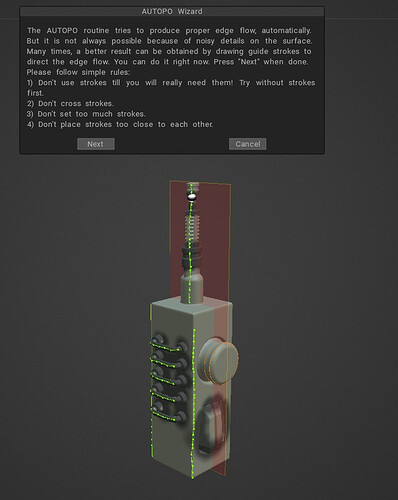 But not best topology 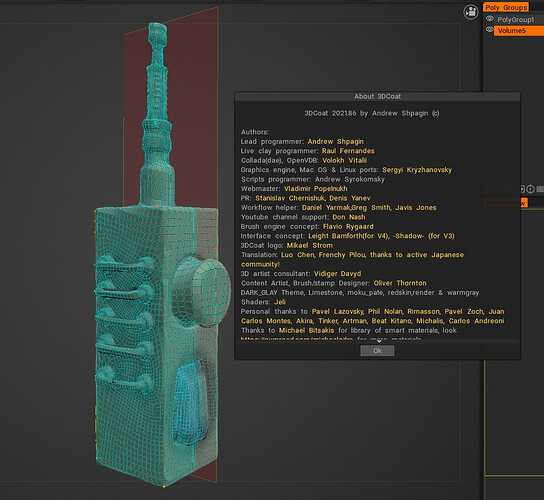 The applink for Blender is really good now.
I wrote a little thing on how to get the 3DCoat applink up and running. It had me confused for a bit. Hope it helps anyone confused like I was.

I’ve spent all day rediscovering 3D-Coat yesterday, and I must say I quite like it so far. Some things have been improved since I used version 4.9, such as the brush engine and some UI elements, and the feel of brushing seems to have improved.

Going to watch around 50 more video tutorials and experiment some more today, then I’m going to try the 3D-Coat applink for Blender.

Interesting to see the results. Autopo’s topology flow / distribution has always been a bit ‘wobblier’ than ZRemesher / Quad Remesher, but in some cases it can yield better results than ZR / QR.

I haven’t revisited Autopo yet, but I remember that it follows the manual guides better than ZR / QR.

Out of subject, but that object gave me idea to do some Unreal 5 stress test.

How Nanite on a 1660 gtx ti laptop is good to evaluate performance.

Meshes used in the stress test, right used in Nanite is 2 million polygons, left for testing without Nanite is around 40 000 polys. 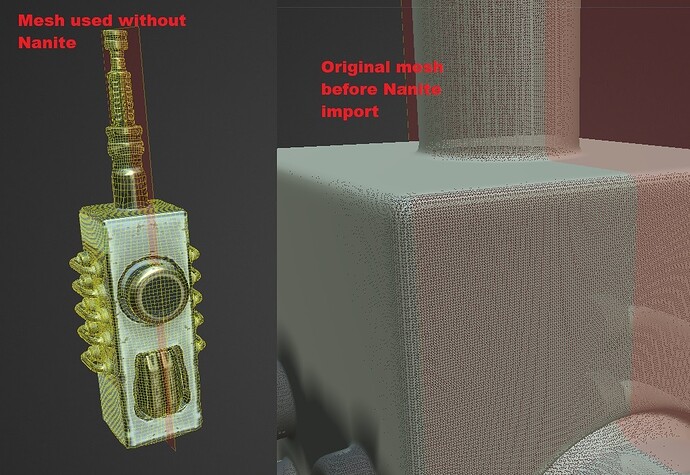 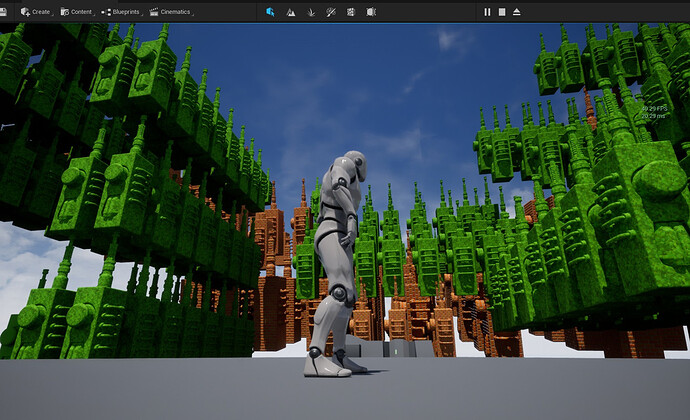 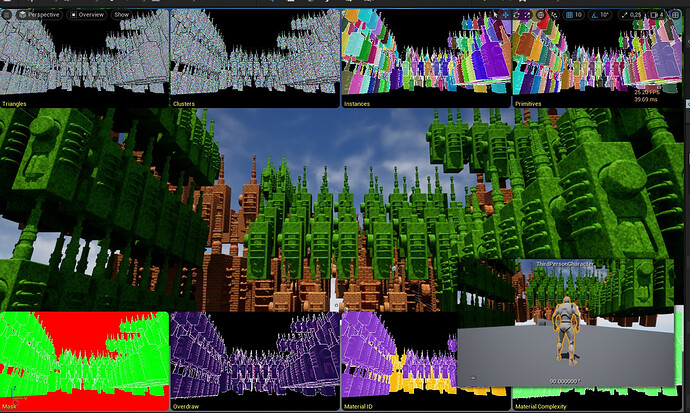 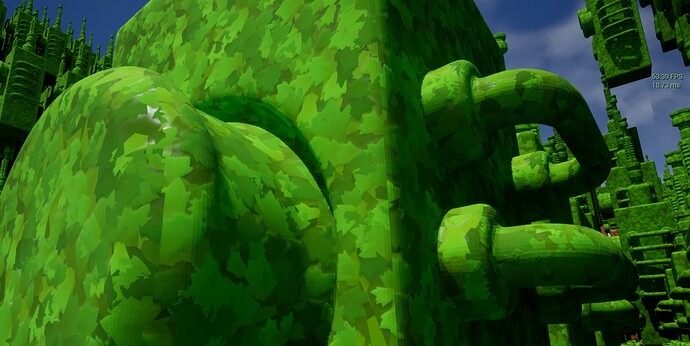 Each object is 2 million triangles 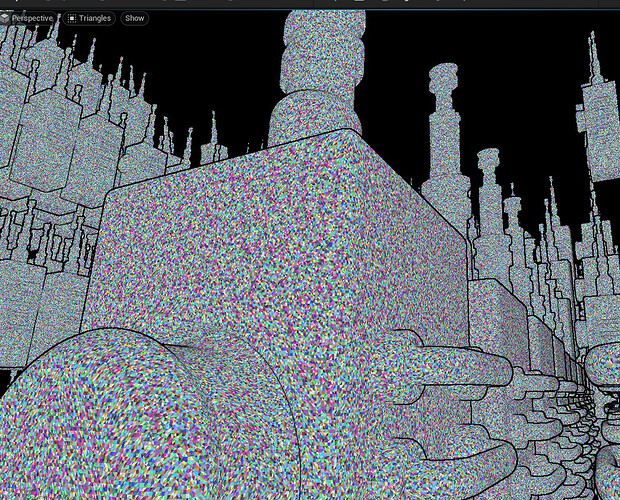 Add some more objects, fps drops to 15fps with editor becoming too laggy 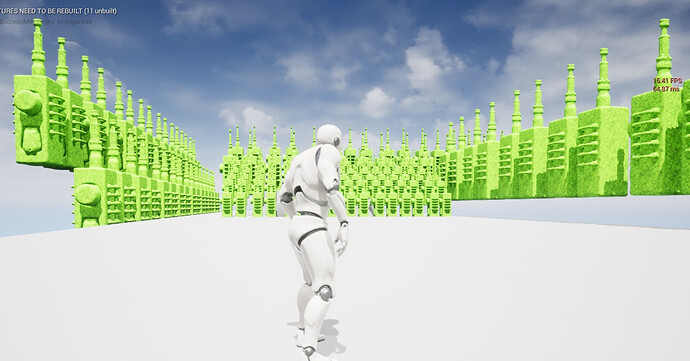 Performance validated and amazing i would say, the first high density level would would not even run at 1 fps without Nanite. 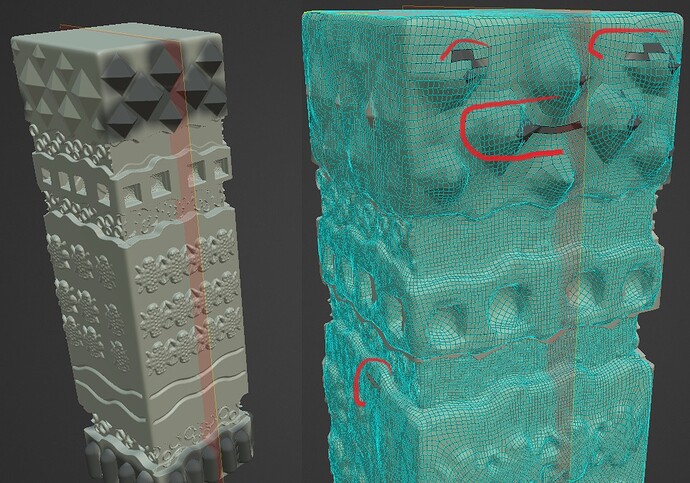 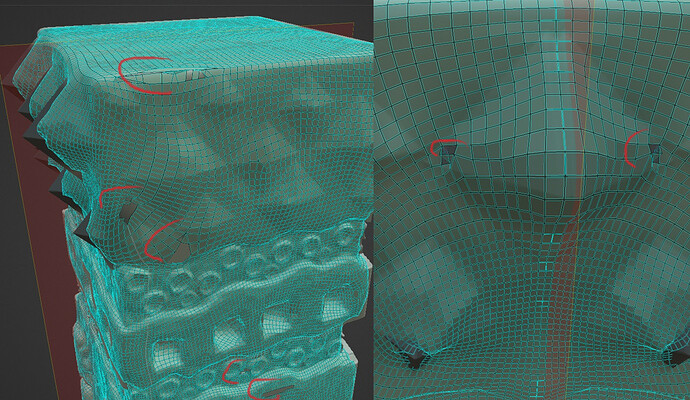 You’ll have to check the retopo for any issues and fix those. 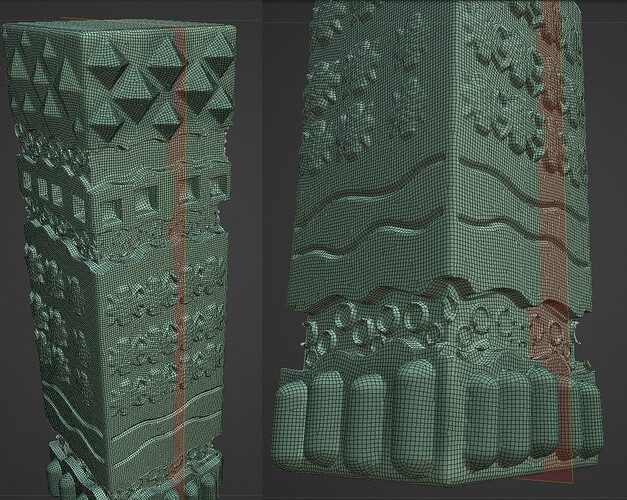 So depending on number polygons needed and object complexity, sometimes you’ll have to choose between Auto retopo and Instant Mesh.

Less issues, less complex could be fixed without too much work 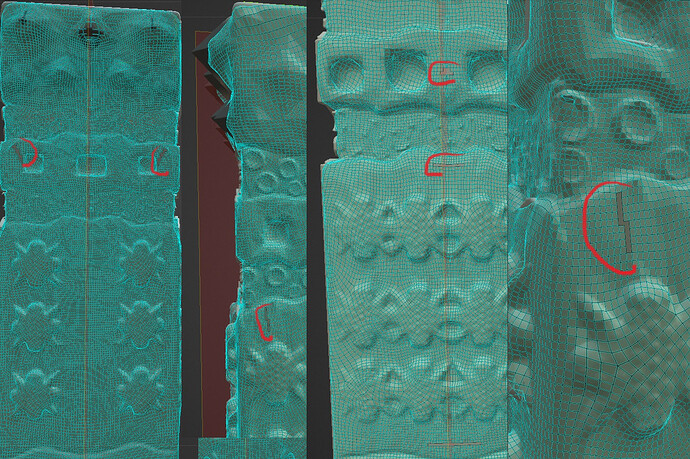 Trying 50 000 polys, Auto retopo get stuck and i had to restart two times, while Instant Meshes again produces great toplogy.
Not saying Instant Mesh is best for all meshes, but for that one, Instant Mesh is the tool to use. 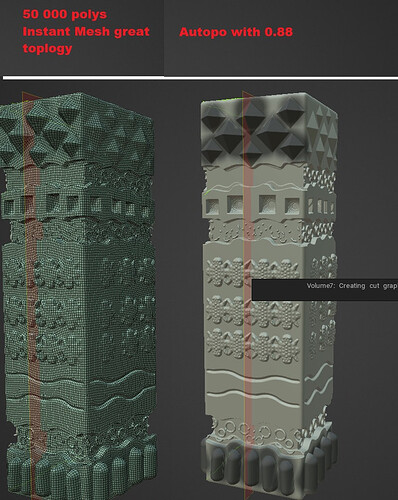 I did a test with the column on 2021.88. I had to put a loop on the part with the divots and painted higher geometry on the pyramids, but it looks pretty good to me. Still some problems on the symmetry lines like can be seen on the left middle part.
10k 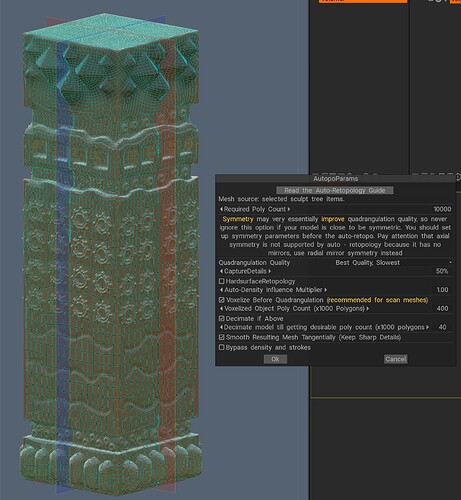 Here is quad remesher at 10k with two mirror planes line 3DCoat. It did something funny with squished quads on the middle right part. Can be fixed with smooth tool in sculpt mode, but worth noting. Seems to have done a good job on the pyramids. It also have a singularity on the near the bottom of the left side

Column mesh download link will be very helpful to take a look.
Tkx in advance.

I can see on your auto retopo example edges between each vertical zones are not followed very well, while lot better on your Quadmesh retopo or on InstantMesh i done also with 10k polygons count. 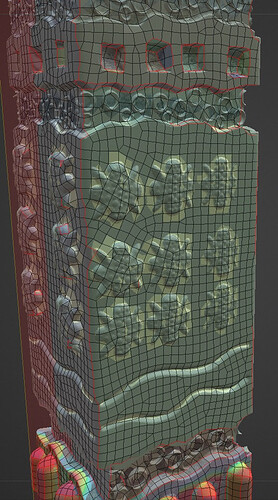 Anyway 3D coat has great automatic retopology, whatever it’s auto retopo or Instant Mesh, just use what works for you. 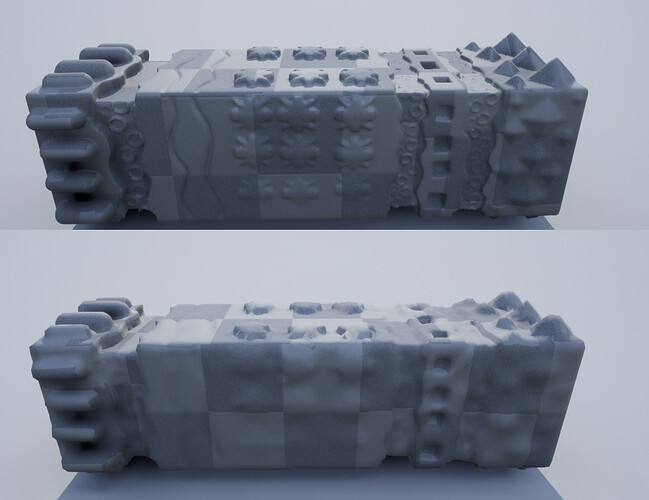 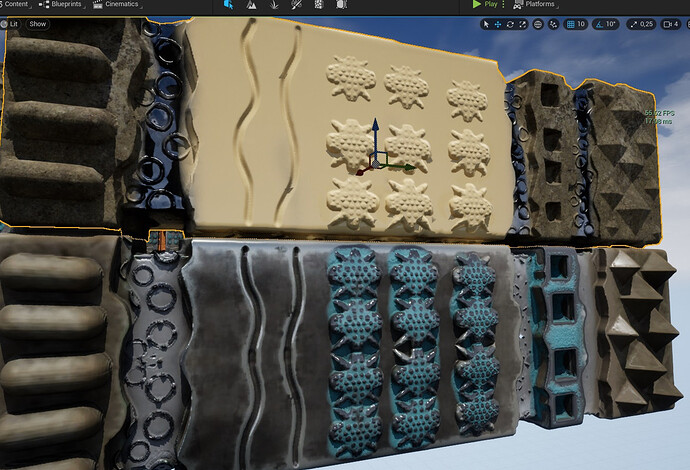 Can I get an .obj file for this?

The obj would be too big. There is a 30 day free trial of 3dcoat.