Hi,
I’m planning to build a computer around Intel CPU and I would like to know what CPU would be the fastest for Cycles?
What I’m specifically interested in is the best ratio between the performance and number of threads.

Reportedly Renderman works best with 4 core processors. When you render on processors with more then 4 cores it’s of course faster but the speed up is not linear as expected.

I wonder if same thing can happen with Cycles. According to this article (http://www.pcper.com/reviews/Processors/AMD-FX-Processor-Review-Can-Bulldozer-Unearth-AMD-Victory/Render-Tests … it’s pretty old though) it’s happening with blender internal on some processors but I was not able to find any recent CPU benchmark of this type for Cycles 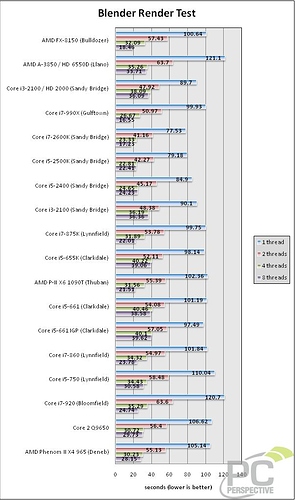 Thanks doublebishop! Have to check that out

Both links map results of various hardware configurations well. But unfortunately it’s quite impossible to draw any conclusions from it regarding the specific ratio I was referring to.

At least in my i7 3770 (4 cores) if Hyper-Threading is enabled (8 threads) performance is improved a lot in blender. I had read that old intel processors with Hyper-Threading had some performance issues, but does not occur in new technologies. You try to find multi thread CPU benchmarks:
http://www.cpu-world.com/benchmarks/desktop_CPUs_multi.html

And this benchmark is often useful:
https://www.cpubenchmark.net/common_cpus.html

About Xeon, usres have posted some good results here. But Xeon are usually much more expensive and I don’t know really which of them work best in Blender.

Thanks YAFU! I’ll compare this CPU line up with my own testing.