Hi! I would like to show you guys my 3d work for some comments and critics. Anyway, I’m planning to make a short animation. This will be my first time make an animation and I’m very excited about the outcome. Right now I’m in preproduction stage. Modeling and texturing,Preparing the storyboard and other stuff. The characters that you see in the pictures are already rigged but only the basic rigging (tutorials on character animation). Im still a noobie. I’ve been trying my best to achieve a nice animation. Hope it will go well. Wish me luck!!:D:D

p.s. Does any of you guys know some links on where I could find a tutorial on rigging mancandy? Basam is so genius on rigging that’s why I wish I could learn on how to rigged that way. thanks! 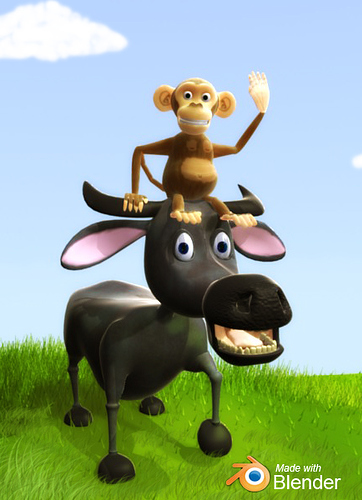 Just thought to let you know that the pix is superb!

Very Nice and impressive. They are really best friends.

It really looks great. Good luck on the animation! Hope to hear from that soon!

I want to see your cow walking. I tried very hard to find out some script for 4 legged animal walk, but I couldn’t sucseeded.

that monkey rules!pic looks pretty good too.the monkeys right hand looks like its trying to hold the horn, but is sticking out halfway.

Thanks guys for the comments!
@kkrawal - I will not be using any script since I do not know anything on python scripting. Just pure nla. Still studying on animation too.
zany_001 - Yup your right. The hand of the monkey is sticking out. I rigged the hand but not the fingers. I still dont know on how to rigged like the mancandy.

The monkey’s left hand looks a little strange…or is it supposed to be part of the whole out of proportions idea?

blood! kabayan!! kumusta? i would recommend to you the book of Tony Mullen, Introduction to Character animation with Blender. it’ll be a good help if you plan on doing character animation. i have a copy. it’s good!
i could give you my cel# if you wish to communicate.just PM me.
kkrawal: i think that’s a carabao

i think that’s a carabao

I think he means a caribou. They are great for hunting.

kkrawal: Hi! Carabao are also known as water buffalo. It can be found mostly in southeast asia and a native here in the Philippines.
garuhh: Hi! nice to hear that i’m not alone here hehehehe. Sure I could use one of those. maybe I could PM you sometime this week.

Wow…great presentation of two friends…I liked it. and all the best for you lol.

Thanks Blood for increasing my knowledge.

real nice modelling, but
the cow looks kind of stiff his legs need to have some varying thicknesses, i mean that the should be fatter in the middle where the knee is.

Thanks for the critics dude. Yeah I think your right hehehe anyway I will remember it next time coz i’m done with the modeling.

Hey! kabayan! hehehe thanks for the support. Can I post the image in the pinoyblender.com?

Did you use any particles for the monkey, because i’m making a monkey and I want to know please.
Thank you fellow blender colleague for your cooperation
Falcron

EDIT: Oh yeah. How did you get that cartoony glow on the monkeys material?
Double EDIT: Make more of an arc on the back of the cow/carabou/wildebeest/unknown thingy.