So I’m rewriting the UV section of the wiki, and want to compare and contrast the different Painting tools and results available inside Blender. SO, I would like to sponsor a contest to see who can paint the best Suzanne using each of the 6 techniques called out in http://mediawiki.blender.org/index.php/Manual/Painting.

This is where you come in. You all are SSSSOOOOO much better than I am, I would like you to contribue your work. This first contest is to see who is best at Vertex Painting.

Take a shot at creating the default monkey head and use ONLY Vertex Paint to paint her, and post your submission here. Subdivision not allowed; you have the use the mesh as is. Winner gets credit in the Wiki, but the image has to be public domain. Since no one will probably ever change such great images and writing style, your work will become Immortal. Please post your submissions to this thread. I will review and select the best in each category. The categories range from absolute newbie to pro. Thanks!!! Please keep your image to only Suzanne head and a world background

How can you be bad at vertex painting? The colors crawl across the mesh constrained to the layout defined by the Us, Vs, and Ws.

I know I’m cheating with the halo, but here’s what I’ve got so far. I had to add a couple of vertex loops around her mouth to constrain the size of her lips. Is that cheating too? 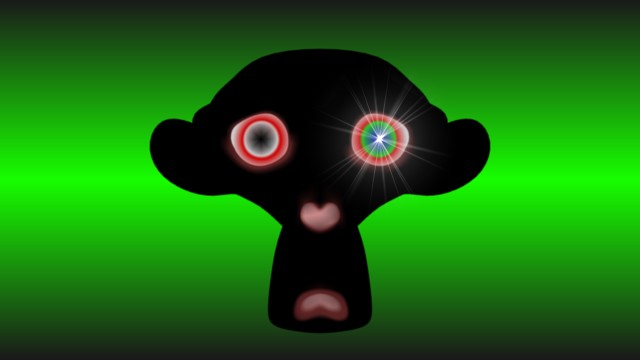 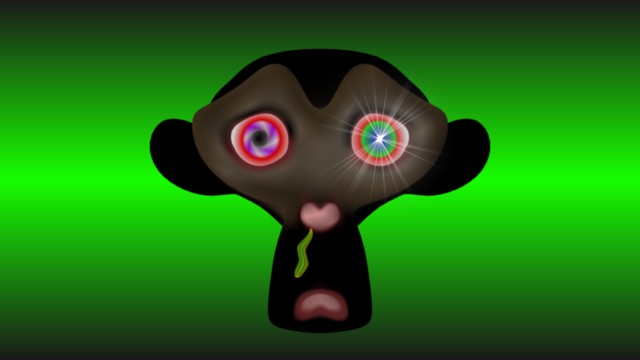 And with a mohawk. Just realized that halos ARE vertex colors, just not paint. subsurf makes painting easier on my eyes but here 's the final without subsurf. Looks like I may be the winner even though I violated the rules a bit with and a couple of vert loops and halos.

What a lame crowd! 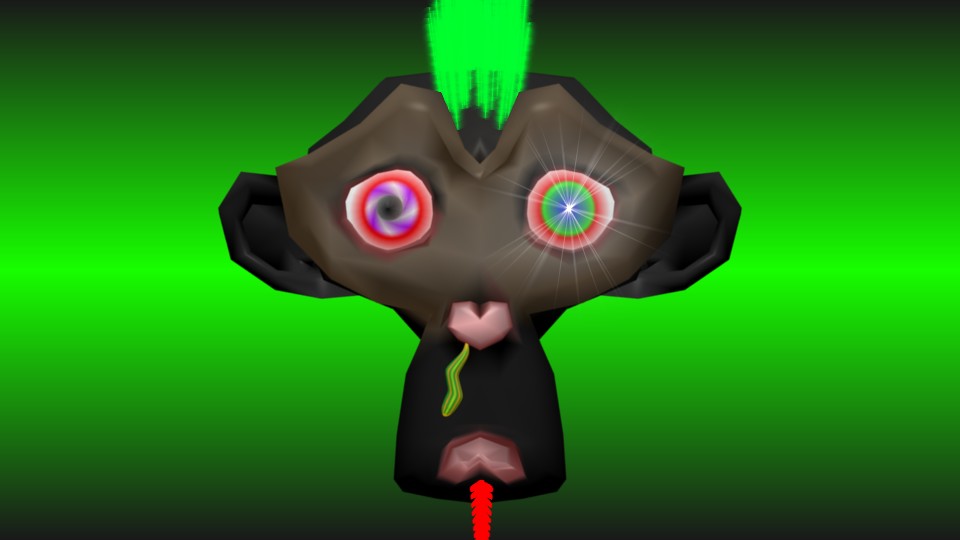 ur so funny. lol. well, looks like youre the winner by attrition. Size it up to 400x300 and orient her like the first two in http://mediawiki.blender.org/index.php/Manual/Painting. If the mohawk is a weight-painted vertex group with static particles, great; if not, make it so, Sulu. and yes, remove any extra vertices you may have added. we are trying to compare apples to apples.

Now, this is for a world-wide audience and will be a lasting legacy for about 5 years or more at least, read and viewed by tens if not hundreds of thousands of people. Their impression of Blender is based partly on what they read in the User Manual. So, PLEASE remove the snot and the idunnothing from her mouth. And, you might want to do just a little more vertex painting with different colors on her face part, to lighten it up, maybe just a little? Thanks, bro.

And let me know how you want to be referenced (RamboBaby or a real name or whatever.) Thanks.

RamboBaby will do just fine. No one here has asked about that name but everyone who knows me has. Here’s how I got it. When MelissaBaby was 3 she decided that she didn’t like this “Baby” crap attached to her name, but Michelle and myself refused to drop the suffix because she was so cute when she was frustrated. So, in order to strike back, she tagged Baby onto the end of my name. That didn’t solve her problem, but it gave her some comfort knowing that she wasn’t totally powerless.

Ok, now I’ve got a problem. I can pull off some fairly blistering effects in Blender so you’d think I would know how to get around this. Wrong! As far as I’m aware Blender will take static particle color from mesh materials only, not vertex colors. What I had to do with the Mohawk in order to keep it in the vertex color class rather than in mesh materials class was to duplicate the faces, part them, change the mesh color, then enable halo, vector and bspline on top them being static. Otherwise the particles take their color from the predominant mesh color. Any Ideas? Otherwise I’ll have to get rid of the mohawk and she’ll just look Plain Jane.

hmmm…i think you need to read up on Multiple Materials. i think that will solve your problem. its what I did for the simpler version. want blend file?

I’d like to look at the .blend, but I’ve tried multiple materials with the above stated effect. Maybe I’m just overlooking something. The mesh receives the particles just fine but always applies the particles to the original material color no matter the colorof the mesh beneath. Think I’ll have a look at how I weighted the verts.

Edit: Yup, that was the problem, I didn’t have all faces selected when weighting so the the mesh materials were overlapping 2 vert groups. Sorry, that’s my first time with weighting. There’s so much cool stuff that can be done in this program that I’ve never messed with character animation and didn’t realize that weight painting was useful for other stuff too. I’m glad (on my end) that no one else decided to enter because I may have gone a long time without leasrning this incredibly useful technique. Thanx for cluing me in Roger. Still, for all you folks who looked at this contest ( the ones who have the skills anyway) and dismissed it as someone else’s problem…I still say YOU ARE LAME!!!

How can you be bad at vertex painting? The colors crawl across the mesh constrained to the layout defined by the Us, Vs, and Ws.

I just think its hard to make somthing that looks good…?

Well, it is difficult when you have that few verts to work wth.

Roger I just can’t allow myself to let her go out without a little bit of style. If this is unacceptable, then here’s the .blend to tweak as you like:

Couldn’t get vertex colors on the mohawk so I faked them with mesh color set to shadeless. 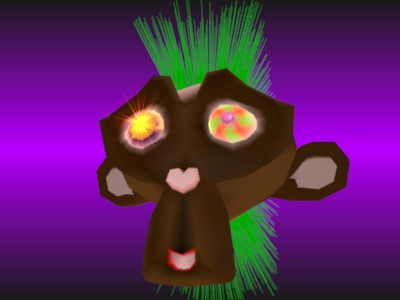 I’ll have a look at that! Longing for a graphics tablet now! So that’s what vertpainting does…

Wish I could draw.
Note: I did subdivide the mesh.
M.A.

Yeah, a Wacom would be way cool!

too right.
Would be great for vert painting.

yeah a tablet does make vertex painting easer, but it still takes time to get it right.
This looks a lot better with some sub-division but you said none so this is what you get. 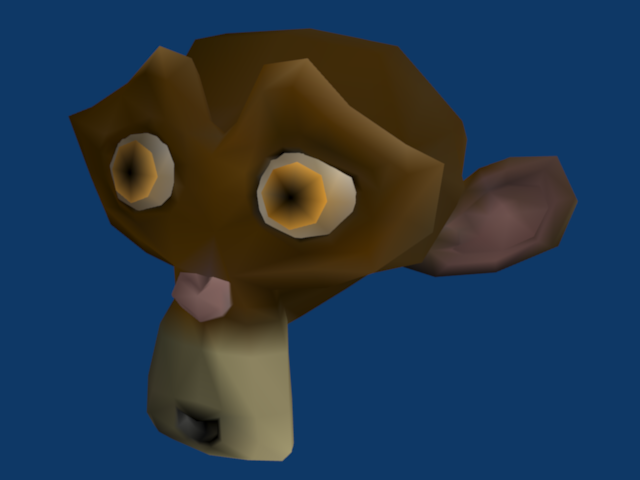 Not an entry, just for fun, baked with the mabaker script:

Meta’Androcto’ that is one SCARY Suzanne. I can see it nowñ Suzanne, the possessed Monkey from hell. yeah. that will make ALL the little kids that get Blender for Christmas scream in endless nightmares. Not something I want to be responsible for.

RamboÑ thanks for posting the .blend. I will download when i get back to the Estates Uni (usa).

Some of these entries are really odd… Here’s mine: 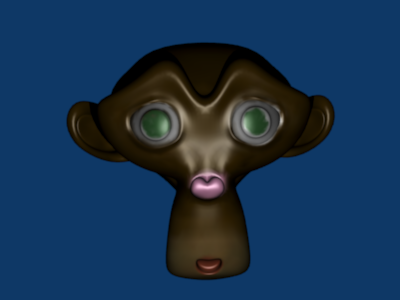