I’m hoping to join this End Pin object to this Cello object and was wondering what the best way to do that would be. I’ve tried selecting the Cello and then the pin and adding a Boolean Union modifier to them, but that doesn’t allow me to just delete the faces of the End Pin that wind up “inside” of the Cello. There’s no cut-out circle area in the bottom of the Cello object.

I tried using Knife Project to cut a hole in the bottom of the Cello, but that doesn’t seem to play nicely with my modifier stack and I wind up with a really odd-shaped non-circular hole.

Just Joining the two objects looks fine, but the geometry isn’t as perfect as I’d like it to be. I might just say to heck with it and go with this, but there are a lot of little add on parts that I want to put on this like the plates and the strings and I think that it would be awesome if they were all one unbroken mesh. I figure that I just don’t know the correct technique and/or sequence of steps yet.

Here’s a screen capture and a .blend file. Advice appreciated. 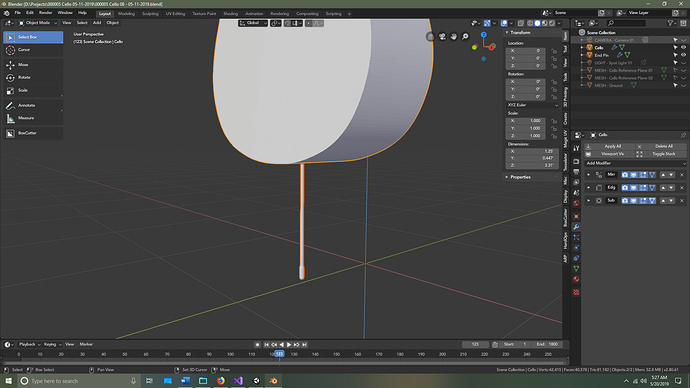