Hi all! This is a dragon I’m working on right now, aiming for a more detailed look, and a 3d render instead of a paint job. As Ace Dragon said, the dragon in my last work didn’t look very complex; it was too simple, so I’m working on this. Tell me what any of you think! 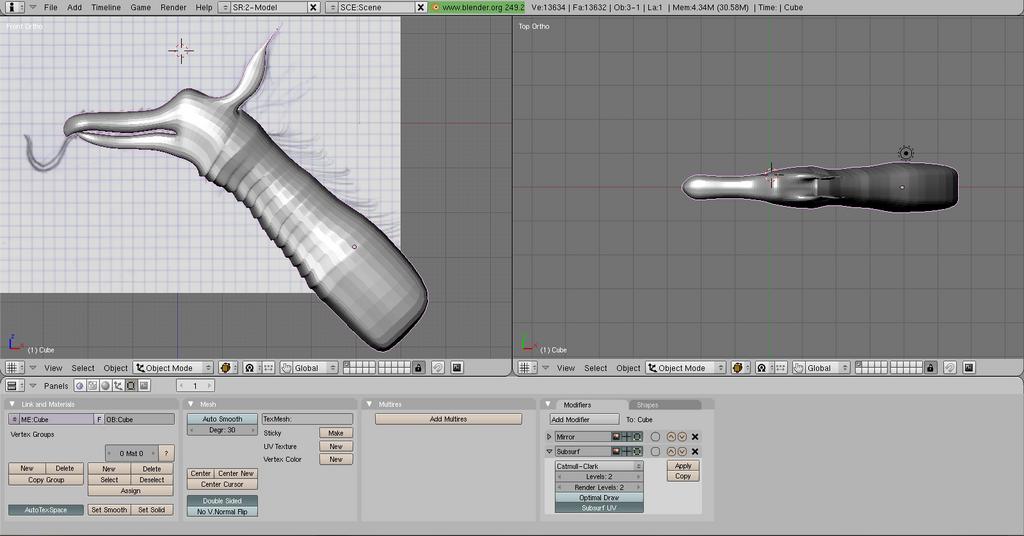 Start first with the basic shape and add details later. You are too early, this is going to be a pain to work with later on. When I looked at the image I thought it’s a dog… until I read the title

Your 2nd attempt is seeing the head and neck is starting to take form nicely despite how early it is. But Odjin has a point in the risk that the mesh gets too complex to complete the entire form easily.

Here are a bunch more views. I’m almost finished with the modelling part, so if anyone has any good ideas on how to texture it, I’m all ears. I’m terrible at texturing. Do you still think I’m making it too complex before making the basic shape? BTW, if anyone has any idea how to make the wings look better, tell me. 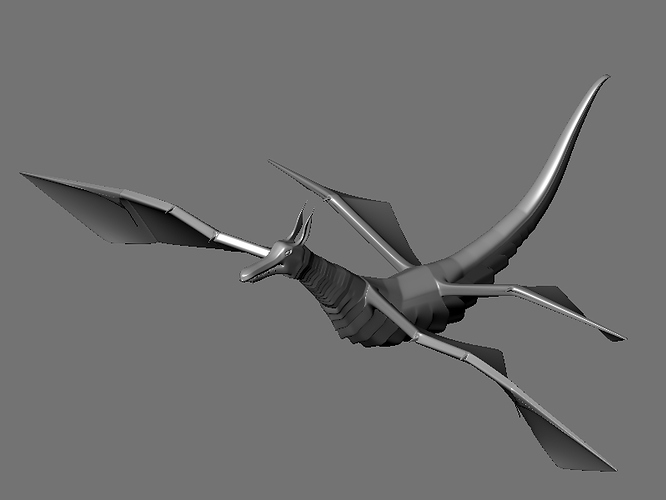 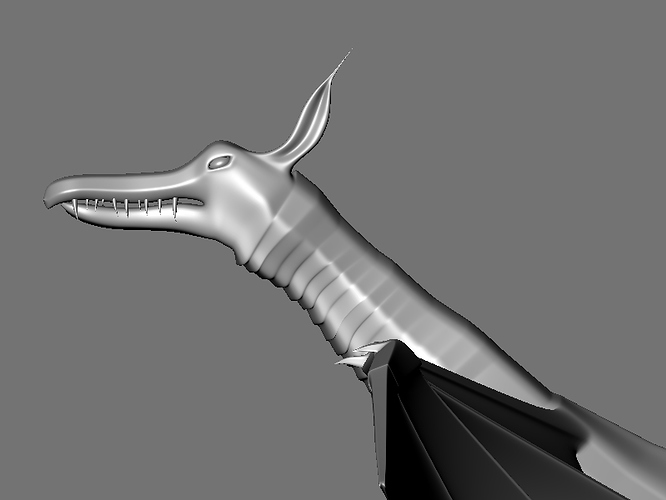 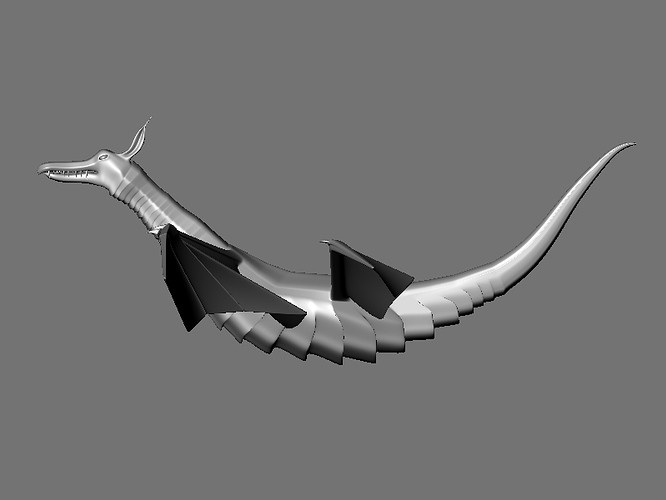 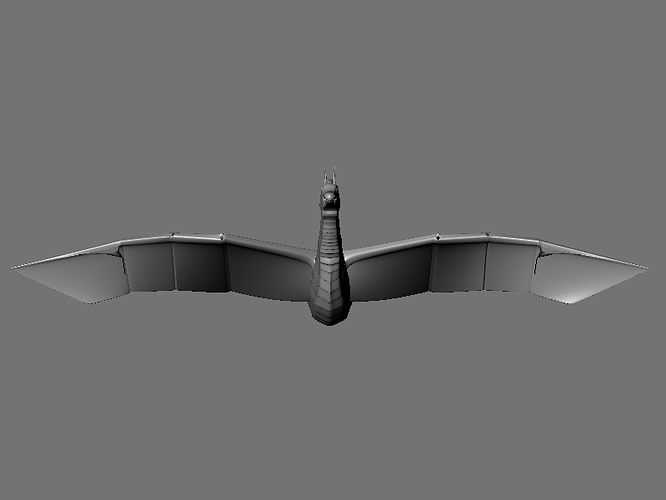 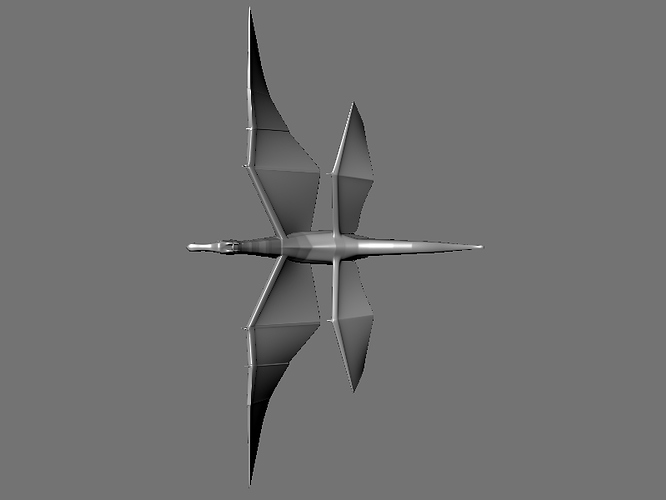 The head currently reminds me of a jackel (type of wild dog), the ears could come more out of the side of the head and could use some horns to make it more Dragon-like.

Also, you do have flat areas in places (not the belly scales) that make it seem less organic, try to round out those areas and then start defining where the muscles would go.

Yes, it’s not a land dragon. It’s a bit closer to a snake than most others.

Here’s more changes. I tried flattening out some spots, but I’m still working on a few more. I added some horns, but they might be too close to the eyes; tell me if I’m right or wrong on that. I also added some feathers to the back. At the time, they’re more like hairs, but I’m also changing that. I added spikes at the end of the tail too. 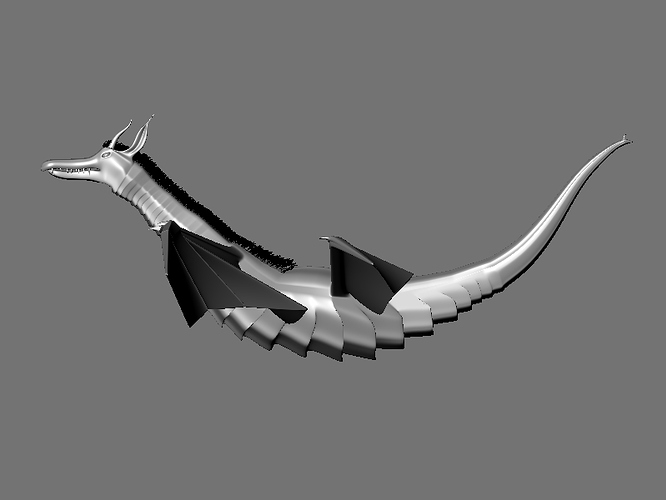 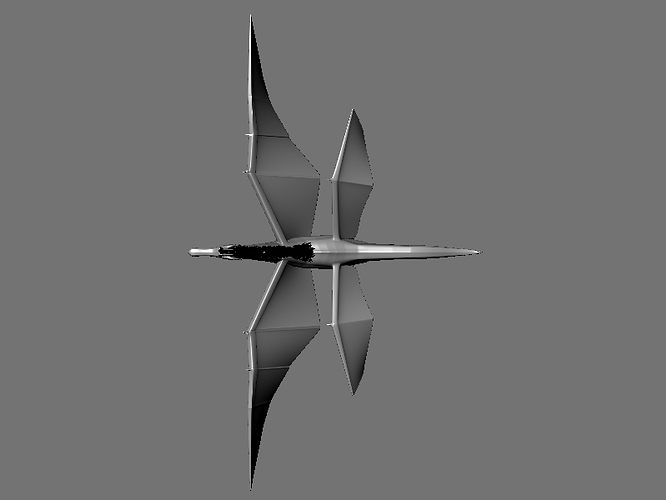 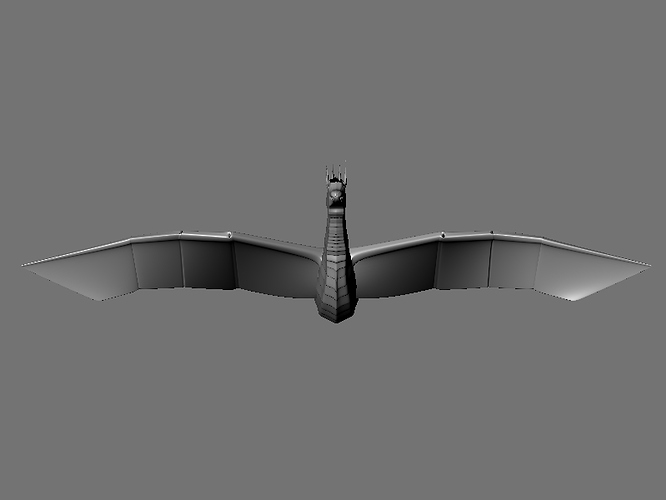 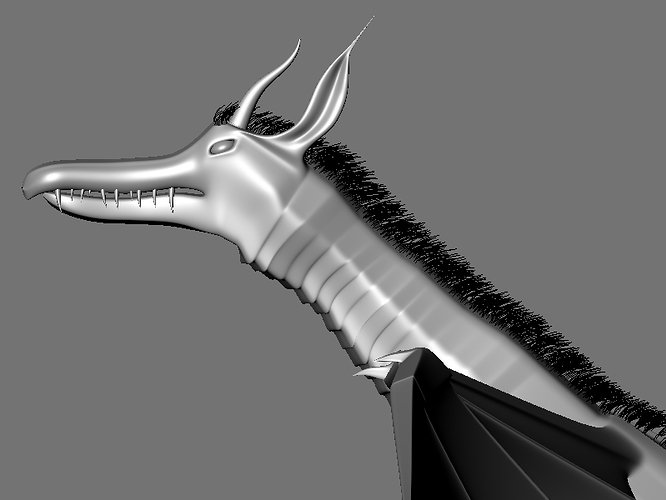 The horns are fine where they are, I’d ditch the small strand thing behind the tips of the ears though unless you flesh that out into a spindly-type feature found on illustrations of Chinese Dragons.

I would make the belly scales stand out less and if you want it to look more organic make sure there aren’t any straight lines like in the wings. Use a bat wing for reference, make the bones in the wing rounder. Also if you look at a bat wing all the fingers/bones come from one point, not going straight back like yours. And instead of feathers(the hairy stuff) maybe some ridges will give it that dragon look. Looks pretty good though good luck.

I’m adding the feathers by modelling a single feather and placing them in a group that I apply using particles, but they’re flying all over the place! Somebody help!

Make sure the particles are all on the surface of the mesh without any actual speed along the normal, I would play with the particle settings a little and see what you get, there’s quite a few things you can do.

There is now ‘real’ way a dragon is suppose to look like as it doesn’t really exist. So, I suggest not trying to model what other people think a dragon should like but what you think a dragon should look like. I really don’t like the way you made the scales on the neck. If I were you i would just smooth it and leave it plain for now and worry about the details later. here is a good tutorial on how to sculpt scales. But I think you should leave it for last.

Every time I lower the normal value, the feathers get smaller. When I put it at 0, they disappear altogether.

I’ve added in the feathers by hand, since I can’t figure out how to fix the bug in the particle system and groups. Can anyone tell me how to go about texturing it? I don’t even know where to begin. I’m considering using several image textures, and using the ‘texture splatting’ effect with stencils to get other parts like the wings and the head, but I don’t know.

Make each major image-map its own material so you can adjust things like SSS per-material, then you can always use nodes to smoothly blend the materials together according to either a stencil mask or a vertex paint mask, it’s similar to how I made the materials for my Dragon models (not the early ones)

Thanks! I’ll be working on that later today.

I’ve tried doing what you said, but if I make each image-map its own material, the stenciling doesn’t work. I’ve also tried a vertex paint mask, but I’m running into the same problem. Does anyone know what I’m doing wrong?

I’ve tried doing what you said, but if I make each image-map its own material, the stenciling doesn’t work. I’ve also tried a vertex paint mask, but I’m running into the same problem. Does anyone know what I’m doing wrong?

The vertex paint masking works when you hook two material nodes to a mix node, and then use a geometry node so you can use the Vcol output.

In the Vcol box you type in the correct vertex color layer and use that as the input to the mix node.

For image-based masking you would also use a geometry node hooked to an image node so you have the correct UVmap for the image.