Can anyone tell me if there any appropriate way to bevel in 2.5?
I just can’t make the bevel modifier work properly and there is nothing in the specials menu.

There is a partial work around though:

and of course if you put a subsurf modifier on top of all this:

There is this problem though

it happens because the bevel geometry only inserts one polygon between faces. So if the two faces the bevel is inserted between have different materials, it has to guess which one to use on the bevels polygon, then if you subsurf it, it balloons out like above.

A much better way of doing the geometry for the bevel would be this (suggested by blend_B in another thread). The technique on the left uses more polygons for sure, but it’s far superior in it’s ability to handle the multiple material problem illustrated above.

In summary, Blender is (and has been for a long time) way better for hard surface modelling than any other (non cad) 3d app I use (i.e. max which I teach at university).

As soon as they get the ctrl-shift-e bevel weights option going again and fix the geometry/uv problems you can see above, blender will once again be king of the hill on this front (at least in my opinion).

Another issue with bevel modifier is when working with a uv mapped mesh.
As a modifier(a non mesh destrutive tool) is expected that it updates the uv unwrap but it does not.
You have to apply bevel first and than unwrap the mesh but It become useless as a modifier in this cases. 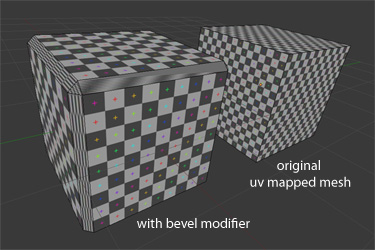 Cool! Thanks Blenderer, I was just randomly searching around and found this thread and more to the point that method is fine with me. Sort of reminds me of maya (albeit very loosely! haha), I was able to try out this method and get interactive bevels in a matter of seconds, so until the rest of the tools are finalised and implemented this workflow suits me no problem.