I’m trying model a pearl necklace, using an array modifier with a line of spheres attached to a Bezier curve/circle. I was wondering if it’s possible to do this without the spheres being distorted as they are moved by the curve?

If not, is there a better way of doing this?

Thanks for the suggestion, this is what I need. I tried following a few online tutorials and had some success but also a couple of issues. When I use a curve circle, if I change the the shape of the circle the objects don’t conform to the changes in shape, they veer off wildly. If I use a bezier curve the objects won’t stay equidistant from each other when I change the shape of the curve. Any suggestions as to what might be happening?

No. Upload an example .blend file and someone, maybe me, will tell you. Guessing is a waste of time.

Thanks I appreciate that. So in the file below, the curve that the spheres are parented with started off as a circle and the spheres followed it perfectly but as soon as I change the shape of the circle you can see what happens. 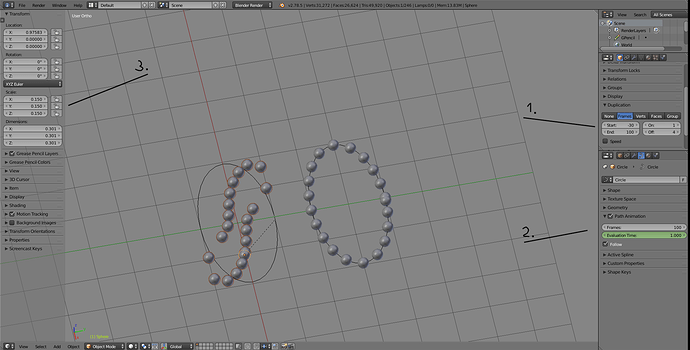 If you clear the origin on the child with alt+o it should line up.

But looks like the curve has keyframes on the evaluation time (2). Should clear that if you don’t want them by right clicking on the field and clear keyframes.
The duplication amount should match the frames on the curve (1). The frames are 100, so the duplication frames should add up to exactly 100 also. Otherwise you either have too little so it won’t fill the curve, or too many and have duplicates on top of each other gather in one place.

And you don’t need duplication set for the curve. It’s needed on the child only.

that’s amazing, I really appreciate, I don’t think I’d ever have got there. I really hope 3D gets easier with time, I’m a couple of months in and some days I wonder what I’ve got myself into.

Sorry to keep coming back to this but I’m still having a problem with distortion. I’m finding that when I create a curve from an already existing mesh which has been changed, the child object will distort according to the changes made to the original mesh. The only way I’ve been able to make the child objects identical is by creating a curve from an unaltered primitive and then changing the shape of the curve but this means I can’t simply take a loop off my model and run the child objects along that loop.

I’ve attached two files to show what I mean, am I doing something wrong or just asking for something which can’t be done in this way?

or just asking for something which can’t be done in this way?

No, just the ever so popular unapplied object scale. I usually also put the object origin to the start of the curve when one is used as a helper object, keeps things organized and sane

Hi, I have an object which I would like to deform based on the path of a bezier curve. I have looked up the documentation and found the sort of thing I wanted (http://wiki.blender.org/index.php/Doc:2.6/Manual/Modeling/Curves/Editing/Advanced) but...

Thanks again JA12, that’s a huge help. Just one question, what does ‘NUMPAD_SLASH’ do? I’m working on a laptop, I have the user preferences sett to simulate a number pad but when I press the slash key I couldn’t see anything happening.

numpad_/ is local view toggle, also available in the view menu. It isolates selected from unselected so it’s easier to see things.