WALL-E
The last one cleans up Earth! 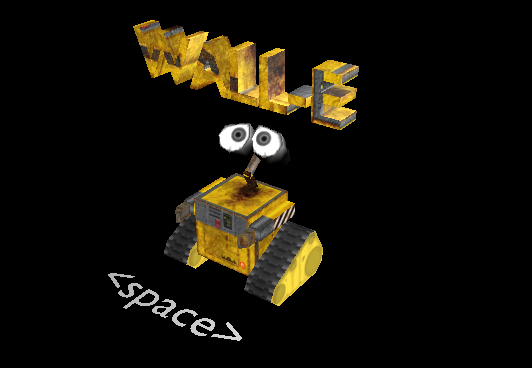 Download
You can download the complete project from GGG’s side project WALL-E.
Alternative you can find a working copy as zip attached.
Josip placed it at the BGMC page too.

Starting
A) From game folder run the blenderplayer with WALL-E.blend as argument.
B) start Blender - open WALL-E - switch to textured mode - in 3d window press <P> 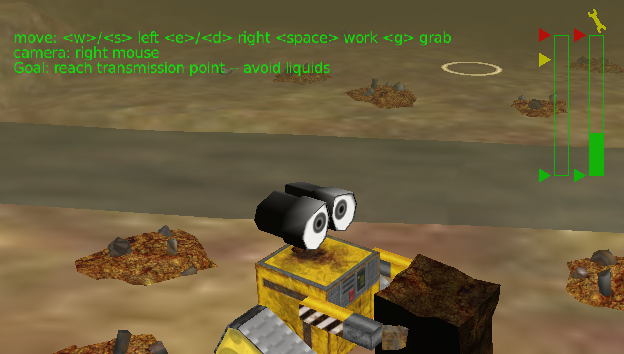 The game was developed and tested on Win8 (64). It runs from Blender 2.68 as well as with the blenderplayer (as argument).
There is just one level. For time beeing some things are just dirty hacks ;).

Story
You are playing around with your new experimental device that should communicate with (at this time) undiscoverred physical effects. Suddenly your device connects to another gadget…

It turns out it is a WALL-E unit … from future? … from a parallel universe?
After trying several combinations you can communicate via a service channel and send commands to its processing unit. This was surprizingly easy. It seams WALL-E’s AI is out of order. But you can remote command WALL-E’s subprocessor parts. It might be a good idea to reach a place with a better transmission channel … Just do not loose the signal…

Avoid liquids. They will damage Wall-E.
Try to reach the next transmission point over the trench.

Re-uploaded to dropbox and posted on bgmc.tk

I tried the game for a few minutes, its really good.

Cool, aside from 1 bug it worked fine (Wall-E got stuck). Good luck!

Awesome looking game!
I think I cheated, I made my way around of liquids XD

This game feels professional, I almost expected a screen telling me I reached the end of the demo and would have to pay for the rest.
The only thing that bothers me is that you didn’t tile the ground texture, just wondering why?

Fun experience. I liked the controls the best. I felt connected to the character.

I love the sub-objective to “avoid liquids” that had me laughing for a bit. Just good little game.