I know I’m a little late to the party but I’ve been sick and couldn’t find the time to get my self to work but I really want to participate so this is my WIP thread. I’ve started modeling/texturing yesterday though I had not quite settle on the mechanics yet so I delayed starting a thread till now.

My game’s going to be a third person adventure game, with some combat and dialogue choices. It’ll feature the story of Ami, a vixen goddess (Female Fox) trying to regain her former power and status while avoiding an all out war between two local factions.

I hope I’ll finish it in time but anyway. Here is a couple of screenshots of what I’ve modeled so far, I have a few animations for Ami the fox as well as some textures.
I don’t like using Logic Bricks a lot so I’ve written the modules to do most of the work, Camera/movement and animation triggers are working plus I’ll use my cell/silhoutte shaders for some visual effects to spice up the atmosphere and the action. I’d appreciate any input so feel free to comment. 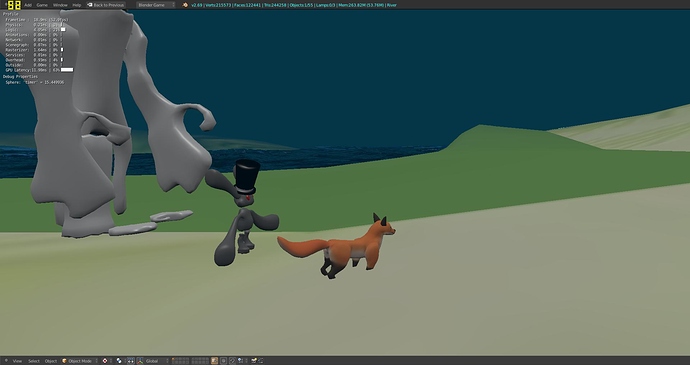 TODO List:
Finish populating the world with vegetation and flesh out the terrain
Finish modeling/texturing/rigging then animate all the characters.
Make a GUI for the game and improve the AI
Work on a shader for the skybox - Might skip this for time.
Work on the story and the dialogue
Get everything to work properly, optimize then rinse and repeat till the end of the contest.

I don’t think I’ll be able to finish this project for the competition. I’ve had an emergency these couple of days with my one of my family members and I couldn’t get any time to work on the project.
I started animating and piecing out the GUI setup but it’ll need at least a couple of days before it can be called a game.

I wonder if I’m allowed to pull it off the competition and work on it as a seperate project because I’ve had a lot of fun making things quick and dirty with a short deadline and I want to give my game the respect it deserves by finishing it. I kind of get attached to things pretty fast so it won’t feel right to leave it like this.
Anyway, I wanted to apologize to everyone who was waiting it and wish the best for everyone else who’s competing in the BGMC. Kitsune… so… nine tails eventually?
That would be awesome XD

Lol, well obviously! The progress of the game is tied to getting her tails back. xP

Lol, well obviously! The progress of the game is tied to getting her tails back. xP

Right! That sounds really awesome!
Can’t wait to see more, there’s lots of good stuff floating around with this compettition.

TODO List:
Finish populating the world with vegetation and flesh out the terrain
Finish modeling/texturing/rigging then animate all the characters.
Make a GUI for the game and improve the AI
Work on a shader for the skybox - Might skip this for time.
Work on the story and the dialogu

With the time left, I think, you should revert some parts of your list.
Every single element of your list could take a day… But I see you are a proficient and hard worker, with straight forward way of working… so good luck!
Your models and textures are amazing!

Thank you for the kind words! I really appreciate it. I’m working as fast as I can but yeah I’ll probably drop few of the eye candies to make it in time.