Well, I started this game at 8:00 this evening, and with the help of a friend, it is playable within time for the submission. (Actually, it could have been more done, but we had some fun doing other stuff).

So here is drone massacre. The aim is to shoot down quad-copters as they fly overhead. It was going to be scored, but I didn’t get around to implementing that. Nor did I add a mouselook cap (oops).
But here you go, the three hour game: 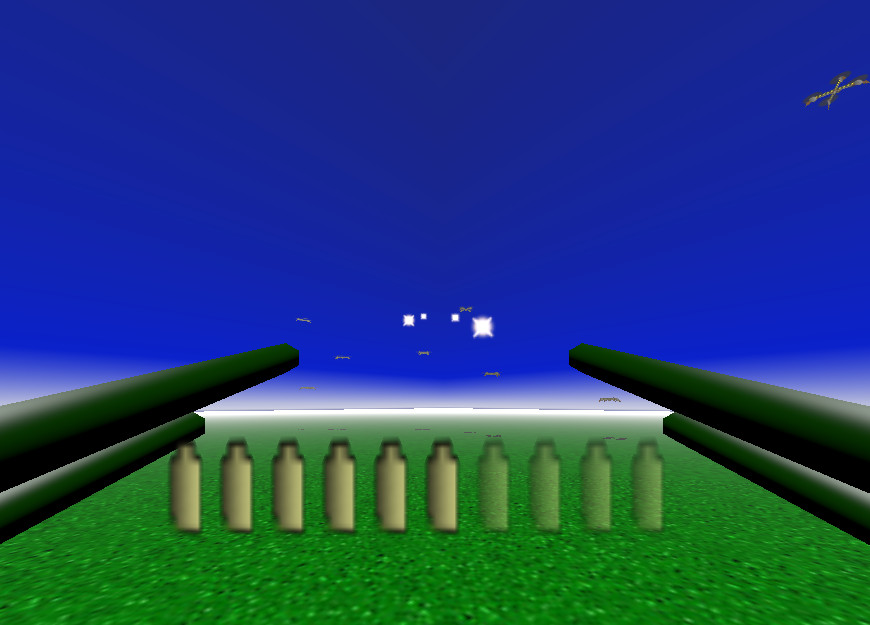 I may well develop this further, I think it could be quite a cool game if things like combos, different vehicles, powerups etc. were introduced (and a menu), but none of those would fit within the 250 poly limit.

Nice game. even for 3 hours work it’s fun to play for a bit.

The good:
Three hours is very short! Well done for making anything.
The graphics are really sweet. i love the drones especially.
I like the ammo counter.
The effects are great. The bullets and explosions are just what the doctor ordered. They didn’t show up at first because I was using an older version of Blender. I think someone changed the way billboards and halo objects were handled recently.

The not so good:
It really needs a score/timer to make it more fun. Maybe an ammo limit.
It needs some sound! Buzzing drone motors, gun sound, some nice elevator muzak anything would be a great improvement over silence.
I’ve really got no other problems with it other than that.

Overall:
As you say, powerups and other stuff could be cool. perhaps some civilian cutouts, like a woman holding a baby which could pop up and you have to avoid shooting them.

I think it’s a really nice game for the time you spent on it.

Makes me want to check out your other games… what’s deep space? better download it and find out.

They [the bullets] didn’t show up at first because I was using an older version of Blender.

Happened to me too.
Once I opened the right version of blender, the game was a lot more fun.
Hitting the far away copters was very satisfying. They’re not too easy to hit, nor too hard.

I’d complain about the missing sound effects, but 3 hours is not a lot of time.

Thanks for the nice comments. I do think sounds would add a lot, I’ll add them when the BGMC is finished because I’ve already passed my allotted time.

You can thank my friend for the Drones. I’m very impressed by what he squished into those 6 tri’s. It was his idea to use quadcopters. I think what I said was “Can you make me something that flies that the player has to shoot down. The textures have to be 64x64, and the polycount is tiny.” And that’s what came out of it.

Bonus points for the first person who figures out what controls which direction the drones face… (Since there isn’t a scoring system yet, well, yeah, um.)

@smoking_miror
I don’t think DEEP Space is the game you want to play. It was my ‘noob’ game, where I tackled a huge project and came out only semi-winning. It’s pretty buggy and needs to run on some ancient version of blender (~2.61). Neon Ball and Sky pilot are the only other games I’ve made that are fun.

Ha! I have a game just like that. It used blender 2.49b and theres no way I can update it. Still people play it and I still get emails asking me to “finish” it. It was a great project which I really enjoyed but in many ways it’s embarrassingly bad.