So my game is finally done and ready to be plaid!

In the game you are the gunner on a carrier, who has to defend a friendly ship that got wrecked.
You have to help the ship survive as long as possible.
Controlls can be found in the “info” menu.

EDIT: If you experience “access denied” errors you have to run Blender as administrator!
EDIT2: Blender Version 2.70 or later is required (LOD, Halo Materials)!
EDIT3: Due to a bug(?) with the mouse position the game will only run properly in windowed mode!
Also I have changed the exit key to the F4 key, because the Esc key is used in game to open the menu. 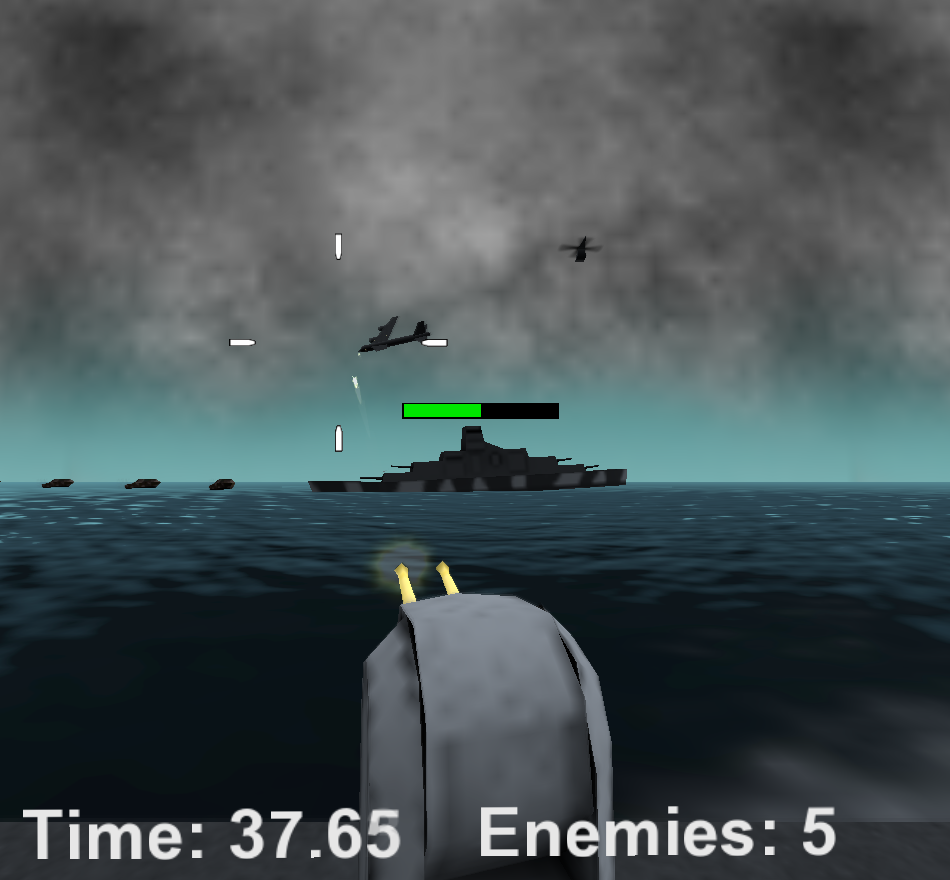 I tried it but it didn’t have any textures, so it was next to impossible to do anything.

@fredstash: You have to unzip the file first, otherwise blender cannot find the external data!

I played the early version in your WIP thread and i can see you’ve addressed a lot of the issues I talked about there.
it seems much more of a polished game, really nice in parts.

But there’s a problem with the external data, blender can’t find it because when I unzip it I put it on my desktop. It’s looking for files in a specific location and can’t find them. 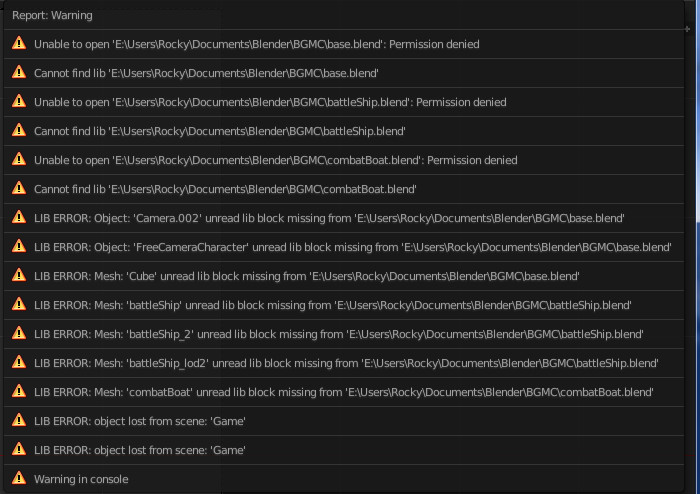 You can fix this by packing your files in to the blend.
others can fix it on their own machine by finding missing files in the menu: But that doesn’t fix the append problems, the game still can’t find the battleship or combat boat: 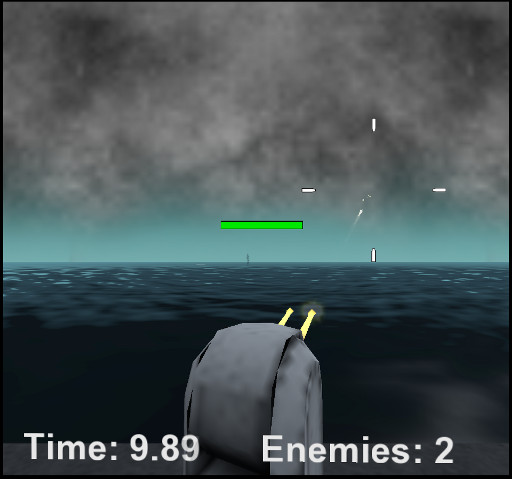 It seems like a really great game, I enjoyed the early version I played before.
It’s really well coded, the python scripts are much tidier and well written than my own usual junk.
I’d love to see a version that works properly on my computer. Technically the competition is over but I doubt anyone would mind if you fix the problem and re-upload now.

One other thing is that it’s good to always leave escape key as a way of quitting the game. If something goes wrong and you can’t get out of a particular scene I had to press Ctrl Alt and Delete to finally close down the game.

EDIT:
I tried running the game as an administrator but it didn’t fix the problems.

That menu…
couldn’t click anything, nothing would work. The mouse is forced inside the screen, and to matters worse - the ESC key doesn’t work. The effect when moving the mouse was cool though!

Skipping to the game scene, the textures weren’t loaded. Managed to do it myself, but no models were spawned

First of all thanks for your feedback guys!
I am sorry that the paths were broken, but it turns out that when I saved my .blend as a copy in blender it changed all paths to absolute paths!
Anyway I fixed it by copying the file manually. New link is in the first post.

Also you can close the game with the F4 key as mentioned in the first post.

@RandomPickle97: Did you play in fullscreen mode? I should have mentioned that I do not recommend to run the game in fullscreen mode, because there seems to be a bug with the mouse position. In fullscreen mode the cursor laggs a lot and also visual cursor position is offset the it’s actual position (that’s probably why you could not click anything).
And you cannot start the game from the “Game” scene, since all initialization stuff is done there.

Works now, and I must say it’s very good.
Plenty of sounds, the zoom feature is neat, the recoil on the turret, everything about it is great!

Nice, but how do you quit the game?

Now that the BGMC has ended I am curious about what you didn’t like about my game and what I can do better in the next BGMC!
Any feedback is appreciated, thank!

I really liked it. One thing I didn’t like though was changing the exit key. I always like to get out of a game (or at least skip back to a higher level of the menu) by pressing escape. F4 is pretty standard, but Esc is just very convenient and natural for a Blender game.

Worked fine for me - I only didn’t know how to exit the game. A button in the menu for “Quit” would be nice.

Nice work! The game looks pretty nice, I don’t know what are the helicopters doing.