Hey there. PiDiYol is going to be a third-person dungeon crawler, like, well, games I can’t really think of at the moment. Like Rogue Legacy, I guess, but not really about platforming, and not in 2D… The name comes from the abbreviation PDL for Procedural Death Labyrinth, or a randomized maze-like dungeon crawler with loot, traps, and possibly perma-death. Some people refer to the genre as Rogue-like-like, or just Rogue-like, though that tends to ruffle some people’s feathers. PiDiYol will be in GLSL mode.

I guess the character you control, a mech with ninja-like agility, will be called a PiDiYol? It sounds cool, so I guess I’m gonna stick with that.

I’m trying to do it in full 3D with as few tris as possible. To assist with this, I’m making the graphics out of pure triangles, basically, which should look pretty cool when mixed with the low resolution and fancy shaders and stuff. Right now I’m getting down the mechanics for movement and the basic game systems, and have modeled the player’s mesh. The mesh sits at 56 triangles, so I won’t be able to have more than a couple of these guys on screen at once without breaking the limits, though I guess it’s a soft limit. I’ll probably also have simpler enemies.

Sound like a great idea, can’t wait to play it 7 days later. I just love to see the process of making something from scratch.
Good luck !

Hi, there’s lots of resources at rogue temple .com if you want to save a bit of time. Things like level generation scripts (BSP trees are good solid level generators) or some interesting approaches to AI, like this one I read the other day.

@smoking_mirror - That implementation looks really cool, but it seems like it might be a bit too much for my purposes for this week-long challenge. I bookmarked it in case I need it in the future, though.

I’m not familiar with / don’t know how to use Blender’s built-in recast system, and I don’t know if it’ll work well with randomly spawned rooms, so that was out of the option. I’d rather not spend too much time setting up waypoints or navmeshes or anything, either. So, I eventually came to the conclusion that my “usual” simple A* node-based pathfinding approach would probably be fine. Hopefully I won’t have to spend too much time setting down nodes, but we’ll have to see, I guess.

That approach is now added to my bghelper module (bghelper.nodemap); it’s a fairly basic A* pathfinding approach, but also has weighting available, which should allow me to set up preferenced paths and also allow for multiple characters / enemies moving down passages when necessary or wanted. For example, enemy A’s walking down the hall, so enemy B tries to take another path around enemy A. If there is no such path, then the weighting should allow enemy B to find another path if it’s short enough and the weight’s light enough. If there is no other path, then it should allow enemy B to start on the “poor” path behind enemy A because it’s better than nothing. That’s the goal, anyway.

Besides that, I finished rigging the player mesh (at least, I don’t think I’m going to change anything). To bypass a bug / unimplemented feature (ability to dynamically set vertex colors on a rigged mesh), The parts are all bone parented to the armature, which is a very interesting approach that’s kinda awkward, and might come back to bite me in the butt.

I made up some low-res textures processed through GIMP; a nice add-on that I found is the Advanced Make Seamless tool, which seems to handle more complex images better. It would always make the image darker unless I disabled the high-pass filter, which is nice to know. Hopefully I can reuse textures as much as possible, haha. 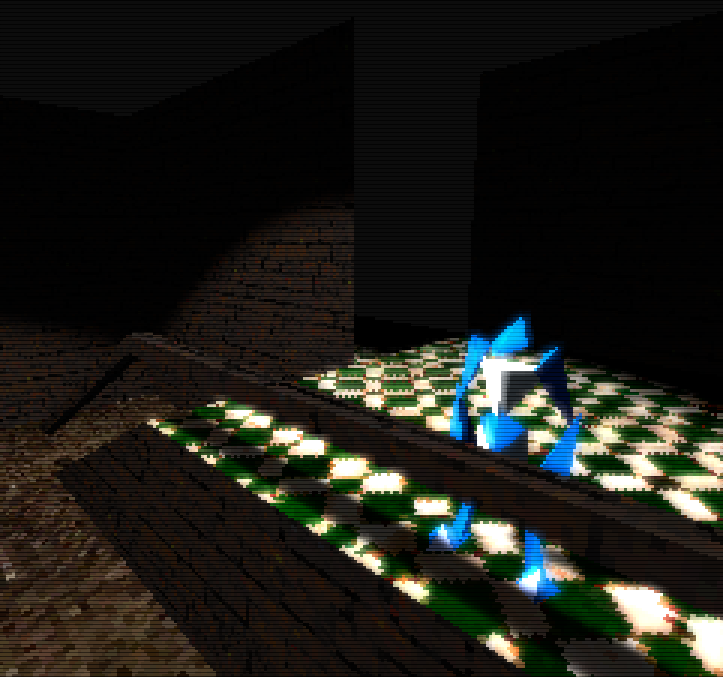 Finally, I added some filters I had already made because I thought it would look cool.

Wow, I don’t say this very often, but I can’t wait to play it!

Thanks, guys. Implemented random level generation of sorts (placing sections of the world) through my bghelper module. Improved the texture work a bit, and added a background. Added better lighting, and also did some of the animations I needed. 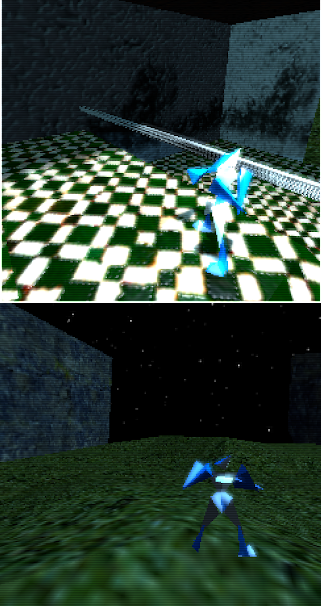 The animation is pretty smooth and the graphics feel true to the era, great job.

Nice to see an update on this, already feared you’d given up again

Looks really great, the graphics remind me of the old PSX days.

BTW:
How did you manage to get the animated gif into your thread?

If you want animated gifs, host them somewhere else and uncheck the ‘make local file’ on the image window.

Loving the style and movement of the main character.

Ye i realy like the style , something about it reminds me more of ps1 than snes though , still looks old and cool, like soal rever meets starwing. Cant wait to see what the game play will be like.

Thanks, guys. Welp, I missed the cut-off time, so I won’t be able to submit this as a BGMC entry. I’ll continue this as a normal project and release a demo, and then put it up on itch or something to sell once it gets further along (while I also work on Gearend).

Shogun Loyd says its not to late, you may get docked some points, but you can still enter I think,