This is a kind of proof of concept of a game I’ve wanted to make fore some time. I’m stripping it down to basics so I can get it working within just a week. Some scripts are based on tests I’ve done in the past on movement and inventories etc… or on scripts lifted from other projects I’ve done. I’ll be modifying them here which takes time. Hopefully I can get finished by the end of the week.

Not much to see so far:

Right now you can move the tank around, either going forward or backward (to present tougher armor to the opponent). You can stack orders so that it will follow a path. If you try to give orders to drive through a building it will stop. The enemy and player will have basic A* navigation later.

Here’s a look at what the tanks will be like in game:

The idea is that you will have a tank workshop where you can design your tank and then go out and try it against some enemy tank designs. A final game would have better tanks, nicer 3d terrain, better graphics, missions, villages and towns and other types of vehicles and infantry. Hopefully I’ll have tank vs tank combat and the tank builder ready by the end of the week. if people like the demo I may go on and develop the game more.

it’s not the first time I’ve built a customization lab for a game, I made a mech lab for my battletech simulator project, though it never made it in to the final version of the game.

How many polys are the tank models?

How many polys are the tank models?

right now they are about 60 triangles. I’m thinking of going top down view and using sprites as that will allow me to use many more tanks in game. In a future version I can go back to 3D models.

what about 2 sprites per tank?

Well, if I do a top down view I only need one sprite for the body and one for the turret (perhaps one for the gun as that can change depending on how you build the tank).

I’m definitely going to go with the top down view, the whole idea of the game is to control a group of tanks, it really wouldn’t be any fun with just two.

Today I worked on icons for the tank building workshop. I also started programming the workshop.

All the icons are rendered from 3d geometry I made and added simple textures to. When you shrink it right down you don’t need a lot of detail so I was able to make all the components very quickly. Some of the guns look a little too similar, but it doesn’t bother me that much, there will be text to tell you the difference between one and another. The guns are divided in to three “eras”, the first is simple field artillery mounted on a tank with little modification. They are good anti infantry weapons but lack armor penetration. The second are multipurpose guns, better at antitank warfare. The third are dedicated long barreled high velocity anti tank weapons. A long barreled 88mm cannon with tungsten cored ammunition will punch through just about anything. You need the appropriate level of technology to be able to add a gun to your tank.

The blue engines are diesel, less powerful but more reliable. The green engines are gasoline, they give higher horsepower, but are prone to bursting in to flames when damaged. They also don’t work well in water. However, if you have a gasoline engine you can give it high octane fuel for better performance.

Here’s my texture atlas so far: 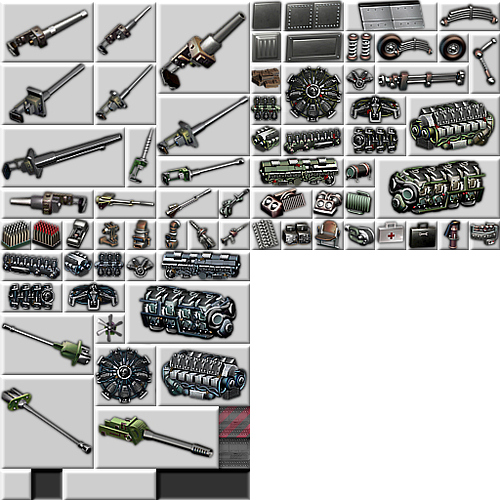 The bottom right quarter will house the tank sprites.

I have another small image as a background, and I’ll be making another texture atlas to hold the terrain tiles. All together the textures should fit on a single 1024x1024 sheet.

I’ve nearly finished the tank editor, though still quite a few functions to add.

I’m going to use the pixelate shader Solar Lune posted and a full res desktop version of the game, rather than try to run it in 512x480 mode. 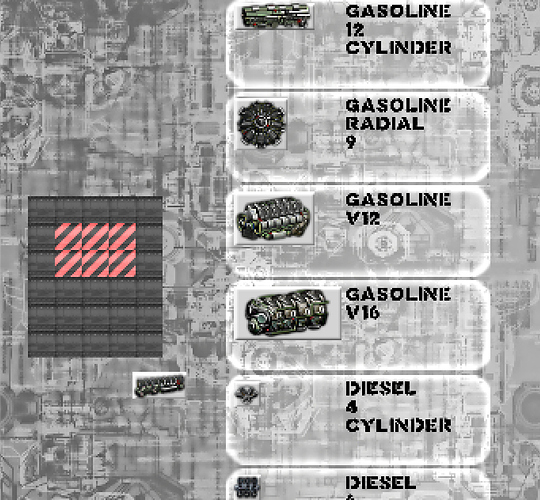 The block on the left is the tank template. Just fill it up with equipment until you’re happy with the design. Each square represents one ton of space, so a radial 9 cylinder engine would weigh 4 tons. The striped red and black part is the turret area. Make sure you place any equipment you want to be in the turret in these slots. You can change the size of the tank (from 15 tons up to more than a hundred) and also the size of the turret. This is showing a medium sized tank with a medium turret.

I spent quite a lot of time at one point in the past researching different historical tanks and how much each part of the tank weighed. I put together a big spreadsheet of info on the subject and then just left it laying on my hard drive. I hope it’ll all come together correctly and you’ll be able to make somewhat realistic tanks, but anyway, it should be fun.

Reminds me of WorldOfTanks, that’s a good thing

Keep it up, I want to play that

Thanks, I’m not that in to world of tanks for 2 reasons:

Hopefully I can get it finished.
The tank builder is done save for armor allocation. But I don’t know if I’ll be able to get the tank battle finished tomorrow or not.

Anyway, I finished a lot of the work needed to carry the game on beyond the competition already.

Here’s a couple of examples from the tank builder: 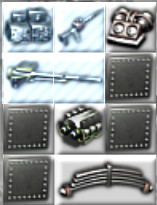 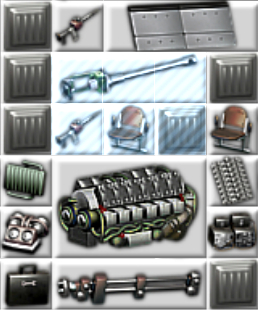 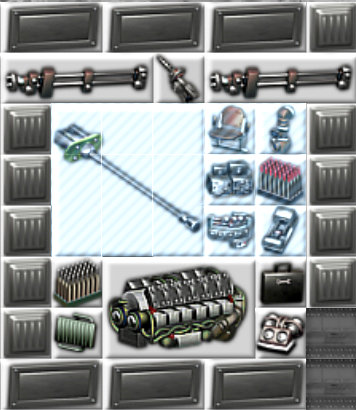 You can see a small, medium, and large tank chassis.
The horsepower rating of the engine is divided by the tonnage of the tank and then multiplied by a effectiveness factor of the suspension. The result is very close to real WWII tank and wheeled vehicles performances.
Likewise with armor, the bigger your tank the more armor you need to pack on to get the same degree of protection.
If you want a gun in the turret it has to fit entirely within the squares designated as turret squares but you don’t need to put turret armor in the turret, armor is shared around the vehicle at 5 different locations (sides, front, back and turret). Adding extra crewmen to the turret or chassis (indicated by the empty chairs) will increase the effectiveness of those areas. Better reloading speed, aiming and repair times if things go wrong. Everything on the tank has a maintenance rating some things have higher ratings than others, if your rating is very high you risk a break down. You can reduce the rating by adding extra gear such as extended fuel tank or improved cooling systems.

I’m considering renaming the project to tank builder and just polishing off that section of the game. It’s pretty fun to build a tank and compare its performance with others.

Maybe I’ll add some challenges where you have to rebuild some historical tanks such as the T34.