Bgmc 17 | death in the sand finished

Let this be a lesson to not make a game in one file and too use different files for different things. It was going to friendly ai and Story and zombies with a mostly bug path finding but due to file corruption I had to spend at least ten fixing stuff that was already there. But I did make a version for crappy computers. And it dose have some nice shading using nodes like height based fog, and a basic color grading in nodes. Hope you guys like it. 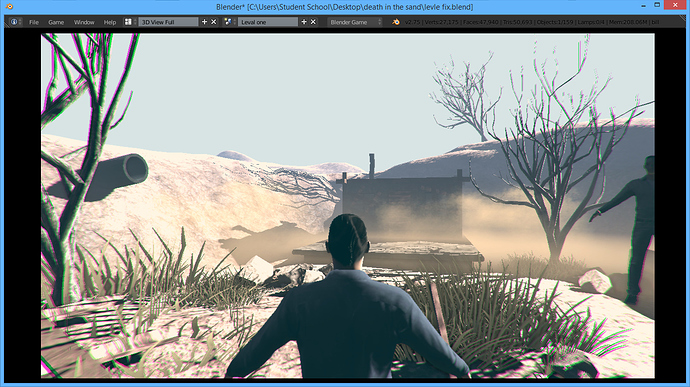 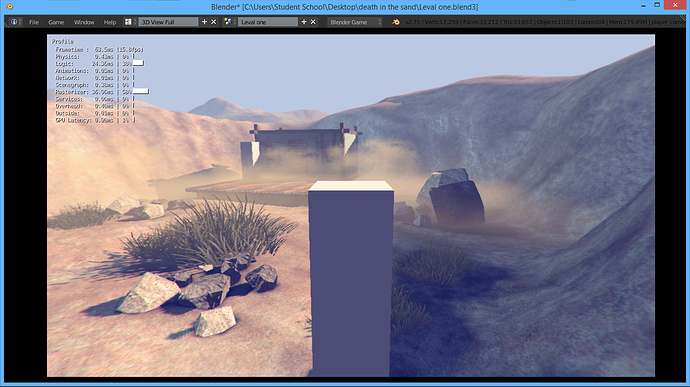 Though let the lesson be that we need more of you to start requesting more bug fix’s in the engine. and also remind dev’s that there are a lot of simple thing’s the engine lacks. before stuff like Lpv and pbr are added there’s a lot of work that needs to be done to stabilize the program before fancy things like that are needed. I’d love to see PBR don’t get me wrong. But honestly what’s the use without being able to make a game and expect things to work out of the box that almost every game engine 10 years ago had no problem. There’s a lot of small patches that would make the game usable. so If you find a bug report it. there are two few people reporting bugs as is. Though I’m guilty of not reporting bugs too.

It’s not really much of a game but it dose have uneace shading setups for anyone who want to see though, A lot of it is ether on;y a prototype or is only added to a few of the objects.

Quick tip to anyone interested use dds texture it stays compressed ram unlike all other image types blender can use. Almost all commercial games use it. Learn how use it right. and sometimes it’s best to use png in rare cases. though it will usually work grate.

Good graphics , I like the sunlight and overall atmosphere , excellent shaders!!Thanks for share.
I think that version 2.8 of Blender will be a turning point ,BGE gets turbo:)
A good tip with dds I read it somewhere , and I will use , I export the dds from GIMP or DirectX dds map creator , you can give a tip with the setting of export … what is the best for game engine?

dxt 1 get’s the smallest size. dxt 5 for alpha. dxt 1 has alpha clip, but blender doesn’t seem to read it correctly, I forgot if I tried permuilply. There are other setings a lot only work for amd, or nvidia.

Nice little demo.
The graphics are really good, but there’s not much to do there…

As I said I ran into a lot of issues.

One tip I have is scale things smaller then I did by at lest 50 percent when using navmeshs.

this game looked great, the chromatic abberation might have been slightly over the top but the rest of it was very well done. I especially liked the ‘fog’ through the map that fades as you near it. I will definitely use this technique in the future sometime!

this game looked great, the chromatic abberation might have been slightly over the top but the rest of it was very well done. I especially liked the ‘fog’ through the map that fades as you near it. I will definitely use this technique in the future sometime!

There’s other uses for it as well like faking light probes you use globule texture and switch them at different heights. It’s bad, but without light probes it’s the next best thing unless someone else has any better ideas. If you do I’d love to know.

to slow. what can i do to disable effects?