Please leave your thoughts,
even if you think my work is good or bad. The feedback’s of any-kind is really appreciated

Here’s the .blend file from the Video below.
http://www.mediafire.com/download/68rxqcfw5add2cr/BGMC_17_-_Waslocked_demo2.blend

Enamy AI; I was way over thinking it before I had a brake-throw. 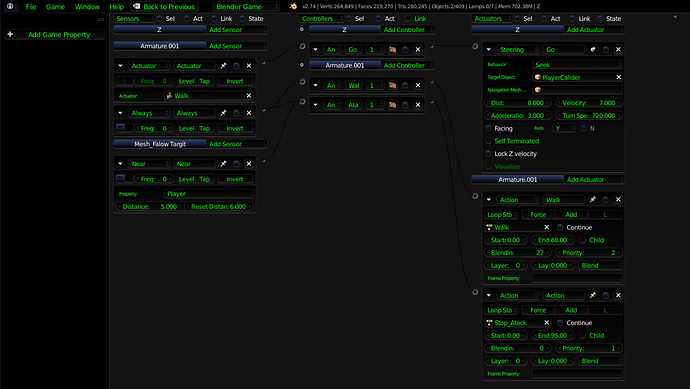 P = Pause and Play doesn’t Pause sound just yet having troubles with that.
E = use the mounted Machine-gun / Turent
Left Mouse Fire the Turent
Mouse Wheel up and down to zoom in and out
W, A, S, D move the player
Mouse moves the camera to Looks around and turns the player.

I plan on doing it all using game logic bricks rather then programing. Wish me some luck

Here’s the .blend file from the Video below.
Old https://www.mediafire.com/?2yaqy2r5u5pimqs

If the Pause overlay screen is too small and or the Gun cam is offset hit the Esc key to get out of the game then push 0 / Zero on your number-pad to use the right cameras data before Playing the game.

Some updates, It toke me long anof but I’ve got a full Ringed animated and logiced Bricked Enemy
The gass-mask hides a rather unsettling face, or whats left of one. I wouldn’t do it but if you like gore you can get ride of them in the menu coming up; You’ve been Warned.
I willn’t be held responsable for any hart atacts ect. if you play this. 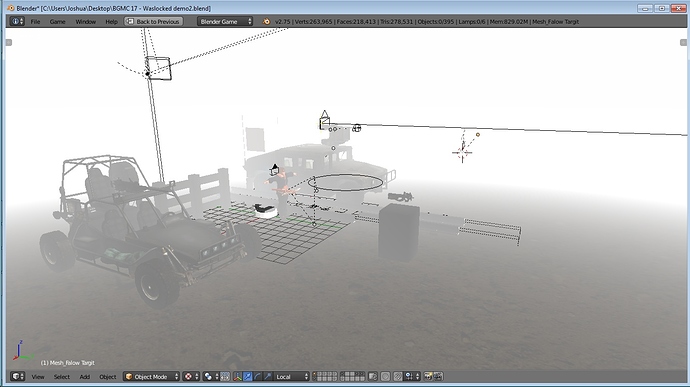 Thanks adriansnetlis, I just don’t know what blenders cap is. I Thought I’d put as much as I could in it to see what happens.
I was getting 120 fps but when it came time to make the Fire_FX for the big_Gun the timing was buggy and couldn’t work so it’s back at 60 fps; wheal 61 so it can now really be 60 instead of 59.

I have a realty bad ear infection making it hard to concentrate for long with the immense pressure in-side my head. I’ve all but gone totally deaf now. I’ll try to finish up before I move later today, not sure if where I’m moving if I can connect.
I wish I had anof for ear drops

If I do have any story it will most-likely be Text via an alpha texture overlay screen. seeing that I can’t really demo any audio just video.
Tail later bye All

Sad to hear that…

I don’t think this is my best work

But what ever, it will have to do.

Well, the video is private. Please, unlock it. Also - after looking for the audio thing you asked, but not finding it, I noticed that my BGMC game’s video 0.07 has “Celestic Awakenings” music in it’s background. I hear about it first time in my life, but they tell that there is one, although it is not even similar to my game’s ambient soundtrack!

Nah, my YouTube Video is only 26% done.
I will be a couple minutes at the most. I’m pretty sure it’s going to be Public

Yeah, not sure man

That music at the end of my video
Reminds me of Men in Black
when shes walking forward from out of the fog.

So what do you think?
I don’t know how to add Bone IK s just yet so I was kind of just winging it for the Attack-animation.
The walk came from Fuse / adobe and I plan on editing it to fit the style and some other motions as well.

Here’s the file as of yet, no health or ammo but it’s on the way

Do you think its finished at Saturday? ^^

I don’t know what the last day of the contest is, but I think we get a day maybe the last to work on any bugs we’ve found.

Sorry about that, both the Edited and the unedited video looked the some, same name and same thumb nail,
but only the unedited one that I didn’t give a link to was Public,
Sorry again.

Here’s a screen shot of the AI you can see it’s much less then pages and pages of logic bricks and countlis variables I had before that didn’t work right. Now fix So here is a Template if anyone wants to use any of it for your own blender needs.

Z Is my Enemy Collation cylinder and Mesh fallow target is what the armiter is parented to for turning slow using edit object track to Time 37 out of 60 fps max game speed.