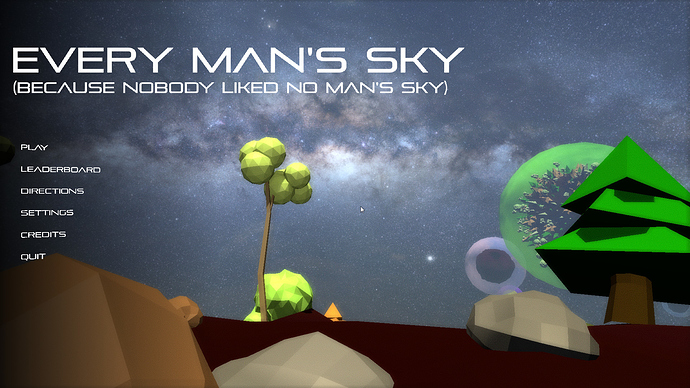 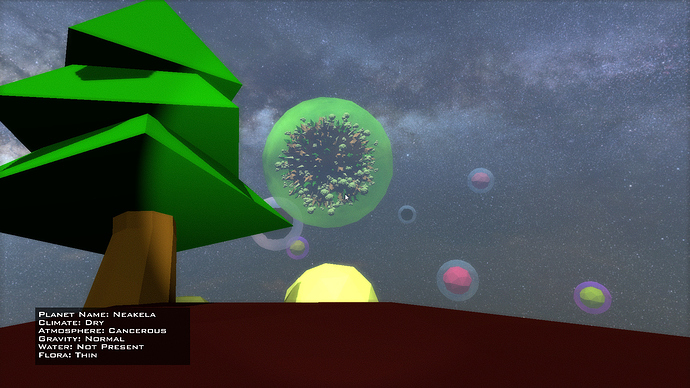 ***I also forgot to mention that if you fly away from all the planets, new ones will generate with different terrain.

Can’t wait to play this, sadly I’ll have to wait until I get out of school tomorrow. On the bright side, at least I’ll get to play the version with updated foliage. :yes:

The caption under the title lmao, ill make sure to play this

User lostscience pointed out a problem. https://blenderartists.org/forum/showthread.php?410742-BGMC-22-quot-Every-Man-s-Sky-quot-WIP&p=3124077&viewfull=1#post3124077 I am going to have to make the paths relative for the game so don’t play it just yet.

I tried the version for low end computers.And the spacevehicle is hard to control. When i fly the spaceship it keeps going out of camera range.

I tried the version for low end computers.And the spacevehicle is hard to control. When i fly the spaceship it keeps going out of camera range.

The only difference between the versions is that one of the filters is disabled on the low end version. I can always just decrease the camera parent offset so the ship doesn’t act like it. But till then, just wait until I get home soon.

when i played it the second time i get this error in the console.

That’s really weird. I don’t have a mainloop.py script.

Yes you do.I found one in blender’s text editor.
mainloop.py

Oh maybe it’s from when I tried to make the game in upbge but a bug forced me to use regular bge and some script was automatically injected in there.

Here is the script.

What types of animals are in your game?You have a python script with animals in it’s name.

What types of animals are in your game?You have a python script with animals in it’s name.

none yet. I was planning to add some but didnt get around to it.

Ok, I think I fixed it. Try the game now.

Unfortunately I can’t go for more than 3 seconds without falling through the ground. Blender’s physics and low FPS don’t really get along. I suppose a version for INCREDIBLY low end pcs is out of the question…?

What’s there is very impressive, though. I happen to be one of the suckers who bought NMS day one - your version isn’t too far off, considering you made it alone and in a week.

I did update the files just now so some of your problems might be fixed. I will also upload a really low-end version. 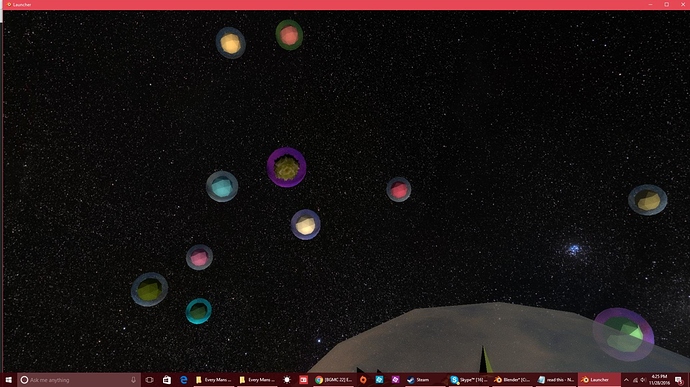 I get 60fps, but i switched to vbo and vsinc off.

Thanks, guys. I have 1 day for bug fixes so I will be fixing a lot of stuff today. Also new foliage is coming soon.