Here is my entry for this Blender game making contest, and I hope you enjoy it. The game is called Evacuate.

*Performance is dependent upon your computer. The shadeless version is much less cpu intensive and is recommended if your computer has trouble playing high graphics games.

Instructions: Download the .zip or .rar. Extract it. In the default folder find the application file Evacuate PLAYER. Double click it. You’re now ready to play! Instructions are in the main menu and also below. To exit press Esc.

3D Assets by Anthony Pilcher (Except those by Dennis Haupt specified in the in-game credits)
https://creativecommons.org/licenses/by-nc/3.0/
Attribution-NonCommercial 3.0 (CC BY-NC 3.0)

It all started when you signed up for a seemingly benign psychological experiment. Soon, it became evident that you were not part of an experiment. You were the experiment. Led by a rogue scientist, an unnamed faction used prisoners like you to create biological weapons.

One day things went wrong, and the world would never again be the same. While you were unconscious from an inter-venous sleep serum, a security door malfunction resulted in a sector of biological creatures to be released. In the pandemonium, several more sectors became compromised, ultimately resulting in compete system failure.

You awake almost a day after the incident started, with your cell unlocked, and the bodies of two heavily armed guards in your sector. As you leave your cell, the biological creatures catch your scent. They are coming for you. You need to evacuate the complex while you still can. You’re going to have to put up one hell of a fight if you’re going to make it out alive! 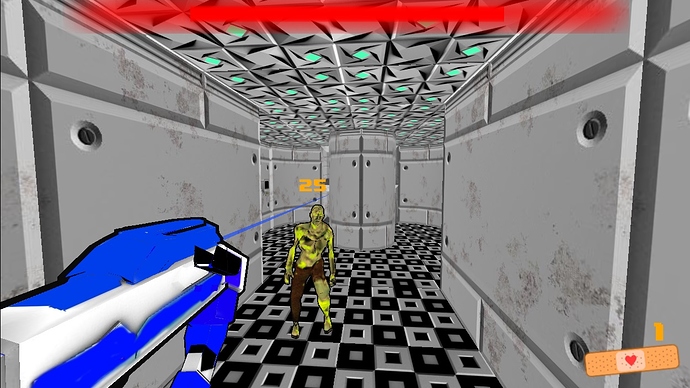 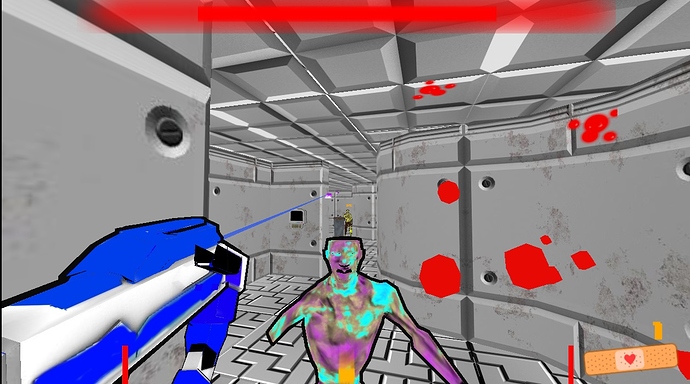 there is no file bub

The PBR version:
Might not run well on all computers.

Regardless of how it looks, the shadeless game is still the same game and plays the same. So if you don’t want to take the risk, just play that one. I hope you enjoy my BGMC 24 game 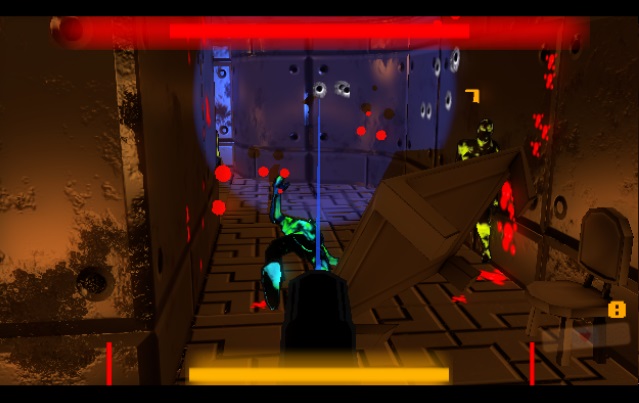 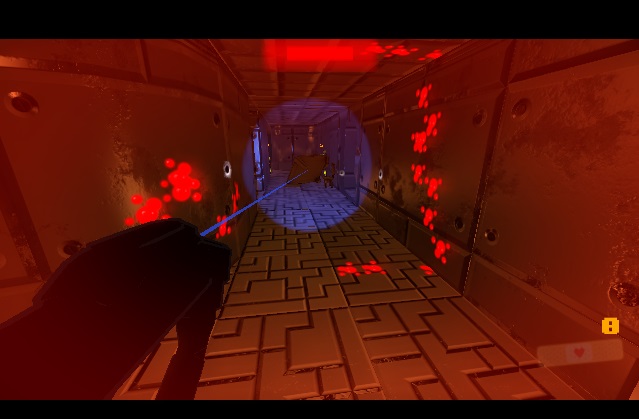 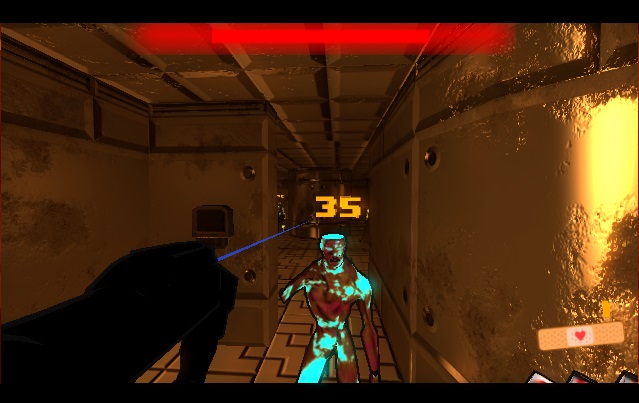 Hey looks cool! What a bummer that the textures took so much performance. Maybe upload a “high graphics” version with all the pbr textures, for the players with good pcs?

I´d love to try out the PBR version, it looks great!

Edit:
So I played the shadeless version and here are my thoughts:

First of all, congrats for finishing such a complex game. I think you´ve got a very solid base, and with some small improvements you can make a great level.

I´m pretty sure you already had all of these ideas yourself and just lacked the time to implement them. I hope you continue working on this a little bit more, because I think that this game has a lot of potential

I really liked the game, and would like to see the pbr version. I was lost in the game somewhere for 5 minutes, but than I could find the way out. It was a really fun game, but I didn’t felt like challenged. It was way too easy to kill even the fat zombies. This was a really good game, but when I first heared the zobie sound it freaked the shit out of me. lol

@CG SKY, yes time was the biggest factor. I wanted to honor the 24 hour limit Smoking Mirror made, so I made the game systematically to get everything done in time.

I want to do so much more with it

Since my friend couldn’t test it I wasn’t able to fix the mechanical issues. When I develop a game I can never tell if I am getting better at the game, or if it is just too easy lol, so I overlook a lot of the mechanics issues.

The animation bugs are less noticeable with the PBR textures and flashing lights. I may still be able to upload the PBR game, as I think it works for Blender users. The file size is also about the same. If we are going by Smoking Mirror’s Sunday deadline I should still be able upload it for the contest.

@Szlobi, glad you liked it

It is a little too easy. Maybe I can make the hit boxes smaller. I will try to make some fixes and upload the PBR game today if I am still able to. I’ll keep the shadeless version too so more people can play. The PBR game definitely takes a little extra computer power to run, but is visually awesome when it’s running smooth.

Edit: I’m currently uploading the original PBR version of the game. It plays fine for me, and maybe it only plays for people who have blender installed, not sure. Personally though, I cannot play with good fps in full screen, but my computer is not the best. You might be able to play in windowed full screen no problem, if not, just keep the window small.

I’ve added the PBR version. This was my original export and I have not made any new changes to it.

I like your videogame.The ability to punch the zombies and the gun was great.
Evacuate needs dynamic ragdoll it would be better.Blueprintrandom developed that.Maybe he can direct you in the right direction.

He doesn’t grab the laser gun at first so it starts around 3 minutes in. It wasn’t really in an obvious place, I should have moved it close to the fury fist.

A great game. Really impressive to see how much you made in such a short time. Good planning I expect.
If I stand too close to a wall the gun clips it, so it might be an idea to have the gun lower in to a hidden pose when you’re too close to walls and be unable to shoot.

A great game. Really impressive to see how much you made in such a short time. Good planning I expect.
If I stand too close to a wall the gun clips it, so it might be an idea to have the gun lower in to a hidden pose when you’re too close to walls and be unable to shoot.

I have really impressed myself too. When I actually finished everything and played the game I could hardly believe I made it lol. I sketched out everything I wanted to make the first day which I think saved me a lot of time not having to second guess how things looked during development. I also had some really cool ideas from the start that boosted my enthusiasm for the game. The theme definitely helped

When I actually started developing, I made the modular kit and some prefab rooms which took up the first 4 hours or so. (I’ve been making modular kits lately so I already had the process down to a tee.) Ultimately, the modular rooms and halls saved me soooo much time on level building. Everything snapped together in literally minutes with the vertex and edge snap (Thank you @Timst3r!). The enemies took me maybe three hours because I made just one, and then duplicated him and made slight changes to individualize them. I got lucky that they turned out halfway decent. Another two hours or so for the fury fist, laser, and character setup and the rest was just putting all the logic together. After 17 hours of development I had a working game, and the rest was the HUD, menus, a few sounds from freesounds.com, some lights, and then some play testing and fiddling with the material settings. I sacrificed bug fixing time for the sake of finishing the game in full

But I will probably release a v2 of the game after the contest is all done with fixes to a list of bugs I’ve been gathering and an infinite carnage mode of the game with high scores if it isn’t a huge undertaking.

Still, I have to credit what I got done in this short time to planning out the whole game before sitting down to work on it (which I’m usually terrible at). And honestly it turned out just how I conceptualized it, which I’m really happy about! Not trying anything I didn’t know how to do like I did last time also helped lol.

I also want to thank Redfrost for his video on optimization tips! My game would still be running very choppy if I didn’t go through that again at the end of development.

Man do love me a good shooter! Looking forward to part 2.

Just played this game. And loved it completely!!

Hi, I have just added the .blend files for both the shadeless and pbr versions of my game and a non-commercial license to use any assets I made for the game. No bug fixes have been added to the blend files. These are the original files used to make the standalone players.

I am currently working on a more expansive version of the game. I’m not sure when I will post new updates, but rest assured LOTS of new features are being added