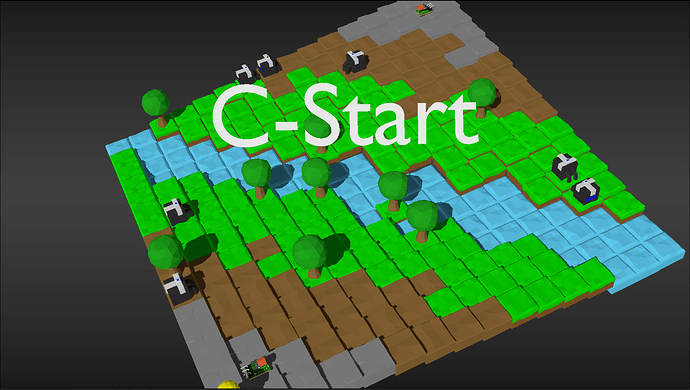 Hi all,
we want to introduce you “ISHB Sci-Fi” a game made using UPBGE fork of Blender 2.79, is an Action Game without a story where the player, a little PCB featured with a “Cannon”, will fighting his opponent, another PCB, in a fight to the death over a 16x16 map in minecraft style.
This is our first participation to the BGMC contest, so we’re sorry if something not follow the rules, we did our best.
As I wrote above, it was made with blender and python, we’ve tried to avoid the use of the logic bricks and also the creation of the levels by hand, indeed the map is created by a script, is in part a procedural generation with a little randomicity in it.
The project is “full” of bugs for now, but we planning to continue develop it and try to improve it as much as we can.
The actual limitation, other than the bugs with the game mecanichs, is that you can’t play alone, you need a human opponent, since we had not time for develop an A.I. system, you’ll have to play against a friend, trying to avoid loneliness

Hope you like it, feel free to give us a feedback, positive or negative, we need it.

Player 1:
W,A,S,D for movement and E for shoot

PS:
Special thanks to the Blender’s Developers, and Blenderartists community

The direction although are very weird lol

Also, some map objects should be indestructible in my opinion, but overall its super competitive !

Also you can hide in trees, its very well thought !

Neat. I might have to pick up UPBGE for this one. I hope you keep working on it, it looks crazy well made for such a short time.

hey i’m glad that you like it, we are planning for the next week to improve most of the game, from assets to code so we’ll go to remove some weird things that are in now. yes you can hide inside trees!! eheh… in the beginning it wasn’t meant to be like so, it was a cool bug that we let there. hope we’ll develop a networking for play in multiplayer, regard to the movement: yes, it is 45 degrees rotated so can appear strange at a first look, but is all in the task list to do don’t worry and stay tuned for news and future updates thanks again for your feedback

Hi there!
Just played your game. Had to get a friend to enjoy with. The minus is that I can’t play alone, well, at least there is no fun playing alone.
However, the game itself looks amazing. The intro is so smooth, cool looking. The visuals are fantastic, clean looking. There is a lack of sound, however. The gameplay itself could be better if the controls were a bit easier aligned. Also, there could have been an effect to indicate that a certain player won a round, as well as a round reset for both players (to prevent camping at opponent’s and spam shooting) + win counter.
In my opinion the game was kind of fun, but very limited. A bit of singleplayer gameplay and more elements to the game would have made it be totally fun, enjoyable and graphically pleasing game. Anyways, I wish you good luck in the contest and expect more great looking games like this during next BGMCs.

Beautiful game - although as others have said, the controls not lining up with the direction movement is a bit annoying. Perhaps using something unconventional, such as A and E for left and right, and W and S forup/down? I don’t know.

Beautiful animation and a very smooth experience. I like the idea of the ‘cannons’ on the PCB’s. Very cute. Could have done with a few effects (eg when the bullet hits things), but overall it was very nice.