BGMC 26 The fate of the BGE

Hello blender game devs!
I’ve just finished this game, at around 12 minutes before deadline! :evilgrin:
Hope you enjoy it!
Oh, and never give up on the BGE!
here’s the download link:
https://drive.google.com/open?id=1RHGFd9TBgtRA0jTYfe6H-9syFkspobXh
Engine: UPBGE 0.1.7
Gameplay: https://youtu.be/n-xfLcjfbms

start from the file written BGMC 26 FATE OF THE BGE 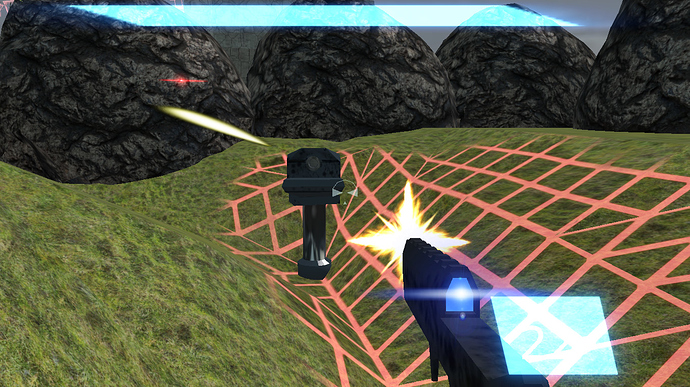 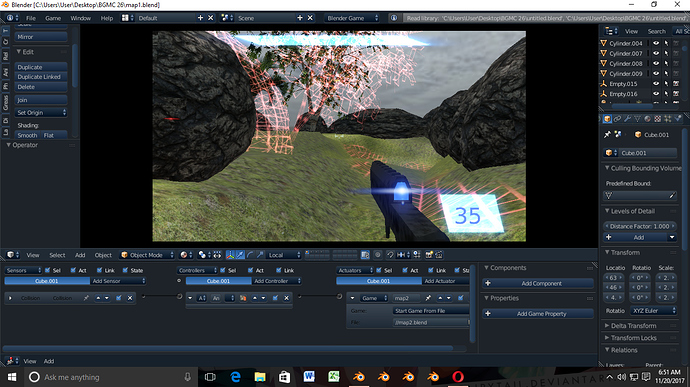 Tell me what you think!
I made this to protect the BGE from death!

A fast and free way to unpack your files

I know that unzipping .7z files on Linux is possible, I just dont know how, should be easy enough to google it, or you can wait for the BGMC 26 All Games Pack which generally comes out a few days after each BGMC

When trying to run your game I have this error:

No idea how to fix it…

what version is that?

you can even run this with normal Blender 2.78
just remember to open up map1.blend and set the shading to GLSL and save and then you can play again from the BGMC 26 file

so did it work?

ayy damn
I get it now, I selected a wrong file in the scene with that starts the game, should’ve been map1.blend, somehow (I was probably set that to Untitled.blend which doesnt exist

I’ll fix it 4 hours later, please wait as I am in school

Im sorry, its a blender glitch that linked a file to the main game altho I appended stuff from it. now that file is gone, and so are the linked stuff
I guess this is it for this game. tho you should still be able to play from map2 but map1 is obsolete

sad, I did complete the game

here! now it should work!
https://drive.google.com/open?id=1RHGFd9TBgtRA0jTYfe6H-9syFkspobXh

not bad at all man!
Good Game but Hard …
overall 7.8 out of 10 bro Well Designed my friend.

Im glad you found it hard lol:p I was worried it might be too easy

Thanks!
Lets hope this gets through ^-^

Just played your game, here is what I got to say about it:

First when opening the game, the menu looked bland and boring. Could have been better first impression if it was not so overbright with so hard-to-read letters.
However, once I was in game, I was awaited by a whole different scene. The environment, weapon, turrets looked very nice. The wireframe effect that you made there is totally awesome. Also, the controls were smooth enaugh, the ambient and sound effects also played a big role on the overall gameplay feeling.
What could be improved, though, is the gameplay itself. At some points I couldn’t really tell if I was hitting the turrets or not. Some sort of visual/audible indication (e.g. metallic sound, dust particles) could have helped with this. Also, I couldn’t tell if I was getting shot at or getting hit. Again, this could best be done with some sounds and particles.
Also, I didn’t like the fact that I was sliding on the terrain. I’m sure you could have come across a solution for that, but hey - you’ll have next BGMC to improve on this, right?

Also, the bloom effect was a bit too bright for the HUDs. At some aangles it was impossible to read how much ammo I had.
Oh, and the retry button crashed the game throwing out segfault.

Anyways, I think you’ve done good job here. The in-game visuals are nice. The idea is not bad either. I wish the gameplay was a bit more polished though. Anyways, good luck to ya!

Nice little game. In addition to the above post, you could have put a little animation on the gun, so it bounced just a little as you walked. Not a big deal tho. I liked it, Great job.

To both of you:
thanks for playing the game,

And also, I made that menu in a minute before I went to school you see, and there was 13 minutes remaining too

since bgmc is over, I’ll fix all that :3

Hmm. I don’t seem to be able to do any damage to anything. I can’t see any projectiles from my guns, although the ammo count does go down. I made it to the second level just by dodging everything, but then can’t kill the EEVEE mech.

Pretty hilarious concept, and the graphics are pretty cool (though I’d date them at early 2000’s quality).
Overall a good effort for a week - particularly for a pure logic brick entry.

Hmm. I don’t seem to be able to do any damage to anything. I can’t see any projectiles from my guns, although the ammo count does go down. I made it to the second level just by dodging everything, but then can’t kill the EEVEE mech.

Pretty hilarious concept, and the graphics are pretty cool (though I’d date them at early 2000’s quality).
Overall a good effort for a week - particularly for a pure logic brick entry.

yeah thanks ^^ well I followed the most efficient way possible to do this with logic but Im afraid this is how far logic bricks go, the logic bricks are heavier than code. its something blender devs should fix

yep, I intentionally made the eevee mech different, you need to figure out how to kill it, shooting its body wont do, the BGE isnt that strong. so get close and shoot its wheels

and yes you can avoid the turrests but it’llbe hard.
and you can destroy them turrets after finishing up a whole clip with the rifle.
could’ve polished the menu and map2 a lot unless that stupid blender glitch occurred (you’ll find a thread of mine in the discussion forum about bge linking stuff when I pressed append)
Im guessing people didn’t really try many times to shoot different parts of the eevee mech to discover how to kill it

Anyways, Im glad I finished tho ^^ I still hope this’ll make it through lol.
I made this to make the devs stop trying to get rid of the BGE